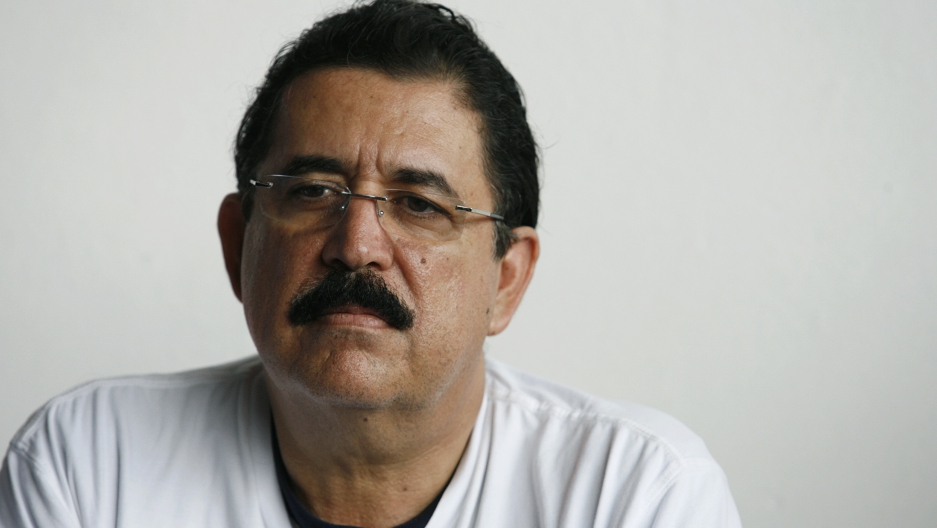 SAN JOSE — Before news of the coup had begun to settle in the streets of the Honduran capital, the nation’s president in exile Manuel “Mel” Zelaya sat in his pajamas Sunday at Costa Rica’s Juan Santamaria International Airport, where he landed after soldiers had ousted him from power.

The sight was a far cry from the president's usual demeanor and attire: head held high, wearing a cowboy hat and boots.

On this day, the bewildered-looking Zelaya sat at the news conference along with his host and Costa Rican counterpart, Oscar Arias, and proceeded to tell the story of what he described as his “brutal kidnapping” — which sparked Central America’s biggest political crisis in decades.

Zelaya was awoken before dawn by the sound of gunshots at “the house I live in with my family, with my children,” he said. “There was strong resistance by my guards for at least 10 minutes ... When (the soldiers) came in, they pointed their guns at me and told me they would shoot if I didn't put down my cell phone.”

The troops forced him onto a plane to San Jose. Welcoming Zelaya here, Arias threw his support behind the ousted president, calling on the world to condemn the coup, which he criticized as an “unfortunate setback” for the region.

“We thought democracy in Central America had been consolidated sufficiently enough so that this would not occur again,” said Arias, whose hand in negotiating peace after the region's 1980s contra wars earned him a Nobel Peace Prize.

“I regret there are civilians, political leaders and part of the population in Honduras who applaud a coup d’etat, just because they disagree with the government in office,” the Costa Rican president said.

Zelaya had angered his country's legislature and courts by pushing for presidential reelection after his four-year term ends in 2010, following a trend that has already spread through other members aligned with Venezuela’s left-wing bloc, the Bolivarian Alternative for the Americas (ALBA), which includes Ecuador, Bolivia, Nicaragua and Cuba.

In spite of a Honduras Supreme Court ruling, Zelaya called a nationwide public consultation to be held Sunday, in an attempt to poll Hondurans on the question of whether they’d allow him to seek reelection. Zelaya's effort to seek reelection would require constitutional reform.

Then he insulted the army, firing its chief, Gen. Romeo Vasquez, when he refused to help distribute ballots for Sunday’s poll. Zelaya was consequently ousted and Roberto Micheletti named his successor.

“In the morning my mom called me and said ‘your tio (uncle) is there (in Costa Rica) and he’s looking for you,’” said Ruiz, 33 — using "tio" in reference to his mother’s first cousin, Zelaya. “I was just able to get in touch with him and he's OK,” Ruiz said Sunday after rushing to the airport.

Ruiz added that his mother managed to phone him despite the virtual communication and media blackout that reportedly occurred in Honduras.

In spite of the mounting tension in Zelaya’s government, Ruiz said nobody in his family expected a coup.

“It was a total surprise. (I feel) pretty afraid and outraged because of the fact that the armed forces have taken control of the country,” he said.

A handful of other Honduran expats waited at the airport in a show of support.

“We want to see what's happened with our president, and the injustice of what's occurred,” said 56-year-old Julio Cesar Pacheco. “Certain groups in our country want to maintain their hegemony, their power, and not allow the Honduran people to have what's considered social justice. We’re confident that the international community is with him (Zelaya) and that he’ll be returned to power. Nobody voted for Mr. Micheletti, they voted for Mr. Manuel Zelaya,” he added.

Costa Rica’s Moment in the Sun

Diplomacy analysts have noted the opportune time in which an ousted president arrived at Arias’ doorstep.

Regional leaders were already meeting in Nicaragua on Monday to participate in the handover of the temporary presidency of the Central American Integration System (SICA) to Costa Rica. The prior president pro tempore, Nicaragua’s Daniel Ortega, had until now resisted handing SICA’s leadership to President Arias, often considered a reluctant partner in the Central American integration process.

Zelaya’s arrival “ended up turning don Oscar (Arias) back into an actor in Central America politics — how do you say in English — willy nilly,” said Rodrigo Carreras, a career Tico diplomat.

Carreras compared this incident to a prior Honduran coup. In 1956, Ramon Villeda Morales took exile in Costa Rica after leading a general strike against the regime of Julio Lozano Diaz. From Costa Rica, Villeda Morales proclaimed, “all must renew the fight to wipe out militarism in Latin America and vindicate democracy.” The exiled activist returned to Honduras soon after that, when the military toppled Lozano Diaz.

In those days, the diplomacy expert said, “when you had a coup d’etat it was simply a fait accompli” — meaning, it was a done deal. “There were no international mechanisms to turn to.”

This time around, world leaders including the United States government have voiced “deep concern” about the coup, claiming only to recognize Zelaya as Honduras' elected president. Leaders of the ALBA bloc pledged today to pull out their ambassadors, after several envoys in the Honduran capital of Tegucigalpa were detained during Sunday’s coup.

It remains to be seen whether Central America’s new integration chief, Costa Rica, and its Nobel-touting Arias will again rise to the occasion as a beacon of diplomacy.

Said Carreras, “We have a really serious problem on our hands.”

Read more about The Americas: