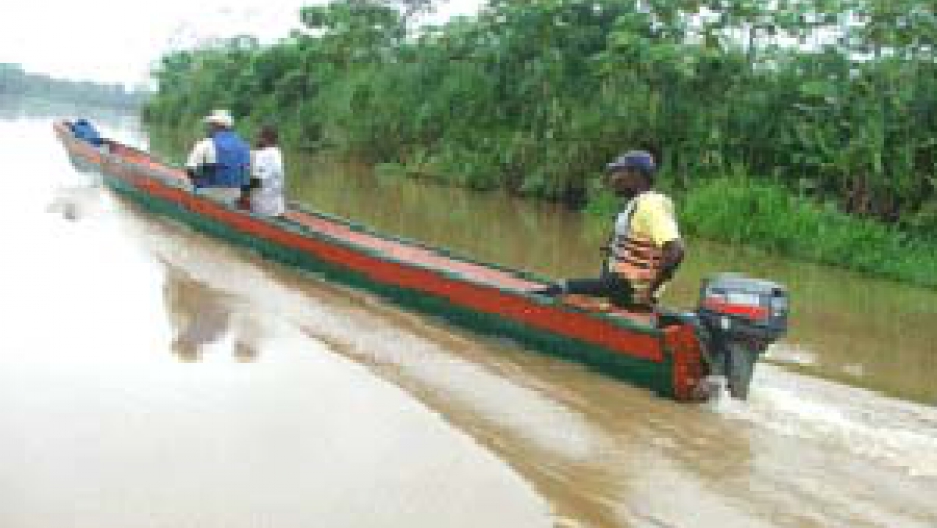 agua farmers use a motorboat to transport the fruit. (Photo: Conrad Fox)

When it comes to the illegal cultivation of coca -- the plant used to make cocaine, a new report from the United Nations finds mixed trends in the Andean region of South America.

The UN found coca production increased slightly in Bolivia and Peru, but dropped significantly in Colombia. Officials attribute the decline in Colombia to the widespread use of pesticides and the uprooting of coca crops, activities supported by United States troops.

But the U.S. backed program Plan Colombia has also been helping farmers grow legal crops and bring them to market.

"Living on Earth's" Conrad Fox filed this report from the Choco forest in Colombia.

It's pouring rain in the village of Napipi. On the bank of a slow moving muddy river, women wash pots while children play in the water. A group of men gather to discuss their prospects.

One of them is Mardonio Sanchez [through translator]: "Right now the economy is really bad. Timber production is way down. The river floods out our crops. The banana harvest, corn, everything else is way down. We're all flat broke right now."

One of the few sources of cash around here is logging, much of it illegal. But the trees are running out, and with it their income. It's the kind of desperate situation that leads many in Colombia to grow coca.

Mardonio admits it's tempting: "We don't have it here, but you hear about coca. It's essentially money. You just harvest it and there's your money."

They may not have seen it yet, but they could soon. Once confined to the south of Colombia, coca has been gradually spreading to other regions, including Choco. As it does, it leaves behind a swath of destruction. In the last eight years in Colombia, 336 square miles of old growth forest – that's about the size of New York City's five boroughs - have been cleared to make way for coca. Meanwhile, the army, funded by the U.S. government, sprays more than that every year with herbicide. They do it to eliminate coca plantations, but locals complain it kills surrounding forest too.

Mardonio and his friends say they don't want that to happen here. Later in the day, the men head to the forest. Twenty-five feet up a tree, one of Mardonio's friends plucks fruit and sends it falling to the ground, narrowly missing his colleagues below. Laughing, they cover their heads and bag the fruit, which they call the "jagua". The jagua is about the size of an avocado, and inside is a deep blue pulp that can stain your skin for days. It's perfect for temporary tattoos.

The jagua pulp will be turned into tattoo ink and shipped to Europe for sale. The men may not like tattoos, but they do like the money it brings in. The average wage for a laborer here is about $7 dollars a day. On good days, a jagua collector can make more than six times that.

"The jagua is our coca," laughs Mardonio. But unlike coca, the jagua is a sustainable product. The trees are naturally-occurring, so they don't have to tear down forests to plant them.

The men load about a dozen large sacks of jagua onto a boat and head upstream. Abandoned villages line the riverbank, reminders of the bloody fighting between paramilitaries and FARC rebels that has plagued this region for years. Rebels still roam the forest, but the army now has firm control of the river. The army is funded by Plan Colombia, the same program that gives the jagua farmers their funding.

Susan Reichle is Deputy Director for the Colombia branch of USAID, the US government's international development agency. Every year her department spends about $100 million dollars investing in projects that she hopes will provide an alternative to growing coca, with products like coffee, flowers, banana, or sugar. The jagua farmers have received $300,000. It's the carrot to Plan Colombia's counter-narcotics stick.

Reichle: "It's not just helicopters and weapons and spraying and whatnot. A good portion of our assistance is focused on alternative development lifestyles.

"The question we get asked very often, why would people leave a lucrative industry, a lucrative crop—and purely because they want to move into the legal economy. They do not want to live with violence, and coca—they understand, it comes with violence."

The jagua farmers beach their boat and haul the sacks of fruit up to an improvised airstrip. With no roads, the only way to send the jagua for processing is an hour-long flight by small plane to Medellin. It's expensive, but Nicholas Cock thinks sales will soon cover the costs. Cock is director of Ecoflora, the Medellin-based company that will process and export the jagua. With growing public concern about the toxicity of synthetic colorings, he sees a big opportunity for the jagua's all-natural blue:

"These candies, the Smarties, you don't find them anymore in blue in Europe, and kids are dying to get their blue Smarties back. We have developed a proprietary technology which makes it applicable for different uses including makeup, shampoos, conditioners, soaps, toothpaste, floor cleaners, Pepsi blue...

"We want to make the blue world from the natural resource in order to promote sustainable development in our country."

If the project is successful, Cock hopes that the men will not only get richer, they'll be less tempted to chop down trees to grow coca. Back in Napipi, there's evidence they may be on the right track.

This man doesn't want to give his name. He admits he used to grow coca. Not anymore [through translator]: "Now, I've got lots of jagua trees producing lots of fruit. It's a healthier alternative for my family. And nobody comes after you for it. I'm old. I don't want to spend my last days in jail."

When Plan Colombia began ten years ago, economic assistance like the crop substitution program was just a small part of the budget. That kind of aid has been slowly increasing, even as military assistance has decreased, and the trend looks set to continue. Plan Colombia's budget proposal for next year shows spending split equally between economic development and military aid.