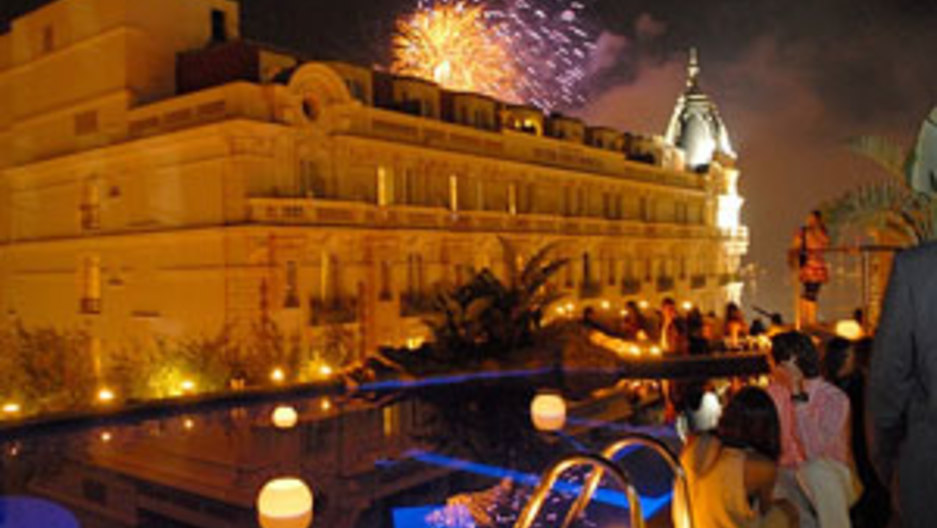 MARCO WERMAN: The Cannes Film Festival is in full swing in southern France. It’s not as glitzy as other years; there’s a recession – even on the riviera. Lisa Nesselson is a Paris-based critic for the British film magazine “Screen International”. She’s in the seaside city now. Lisa, it’s a rough economy out there and one doesn’t think of “down and out” when one thinks of Cannes, especially the Film Festival. Are the parties as lavish, is the fanfare as loud as usual?

LISA NESSELSON: Well, the notion the outside world has about what the Cannes Film Festival is is seriously skewed by the way it’s covered by international media. And in fact, there haven’t been many parties to speak of for years now. But I would say that where the economic downturn has been felt is that more of us are eating tuna fish out of a can between screenings instead of springing for a grilled cheese sandwich and a beer because you’ve got to watch every penny.

WERMAN: I mean, Cannes is a pretty sweet gig to get if you’re a journalist. How is your expense account this year? Are you staying in five-star accommodations?

NESSELSON: I’m staying in one-star accommodations but five-star prices, because my hotel room is 200 euros a night and it will drop down to 80 euros a night when all this is over. But my expense account is how shall I put this, non-existent. Last year, I spent about 10 times what I earned, and this year I may break even.

WERMAN: Let’s talk briefly Lisa about what Cannes is really supposed to be about, the movies. Tell us about In Glorious Bastards.

NESSELSON: In Glorious Bastards has the temerity to rewrite the outcome of World War II. And Quentin Tarantino was asked the other day if it’s a Jewish revenge fantasy, and he said, “Well that’s not the shelf of the video store that he put it on,” and I liked the image of the shelf of the video store. But what he’s done is he’s made a World War II movie that’s also sort of a spaghetti Western. And it’s much more straightforward than what we’ve come to expect from him. There’s a lot of darkly funny stuff that refers back to the nature of movies, but he’s also playing with history. And if I have to sum it up in a nutshell, I’d say that it’s about how movies have the power to change history.

WERMAN: And we actually have a bit of the trailer to In Glorious Bastards, and I think it will pretty much summarize the plot. Let’s hear it.

BRAD PITT: My name is Lieutenant Aldo Ray, and I need me 8 soldiers. We’re going to be dropped in France, dressed as civilians. We’re going to be doing one thing and one thing only: killing Nazis. We will be cruel to the German and through our cruelty they will know who we are. They will find the evidence of our cruelty in the disemboweled, dismembered, and disfigured bodies their brothers will leave behind us. And the German will not be able to help themselves from imaging the cruelty their brothers endured at our hands.

WERMAN: Brad Pitt there, as the character Aldo Ray in Quentin Tarantino’s latest “In Glorious Bastards.” Lisa Nesselson, “Antichrist” is a film that’s caught everyone’s attention at Cannes. Danish film maker Lars Von Trier’s latest feature about a couple, played by Willem Dafoe and Charlotte Gainsbourg who are trying to cope after the death of their son. It sounds like it could be a compelling drama, but the theater at its screening didn’t really agree. Tell us what happened.

NESSELSON: The reception for the film was a typical reception for a Lars Von Trier film and that is to say he’s very much a love it or hate it director. So you had a lot of people applauding, and then a certain number of people booing or hissing, but nobody got up and left. People were squirming, people were involuntarily shouting out, “Oh no!” or “Don’t do that,” or “Oh, my God.” But they didn’t get up and leave.

WERMAN: So what prompted all of this kind of crazy reaction?

WERMAN: Sounds like a real lifter-upper. Let’s end on a happy note. There’s this fun film called “Panique au village”, “A town called panic”. I saw the trailer for this on YouTube. It looks like a lot of fun, but it doesn’t take itself too seriously at all. It looks more like “Gumby” and “Mr. Bill” than it does “autor cinema”.

NESSELSON: That’s not a bad comparison but it is absolutely autor cinema, if we take the definition of that to be film makers with their own personal vision who come out with a movie that nobody else could have possibly made. This is two very talented Belgian animators who have decided to treat us to a universe made out of paper mache and cardboard – very basic, very bucolic – where all of the characters are just those incredibly generic toys that kids used to play with – a cowboy, an Indian, and horse. And those three characters, who are cleverly named “Cowboy”, “Indian” and “horse”, live together in a house, something happens to the house – they try to rebuild it and every time they try to rebuild it, weird little creatures from a parallel universe come and steal their hard work. And one of the great components of it is this is stop-action animation, so it’s very rough-hewn and yet it’s incredibly entertaining. And I think it will touch a place that people have sort of forgotten about with all the inroads we’re making in 3-D movies and computer animation. This is basic, old-fashioned stuff, and I felt like I was playing in a sandbox from start to finish.

WERMAN: And they all live happily ever after. That’s a clip from “Panique au village” from Belgium. It’s going to be seen in English as “A Town Called Panic”. Lisa Nesselson, a Paris-based critic for the British film magazine “Screen International”, always good to speak to you, this year from your one-star accommodation in Cannes. Thank you.