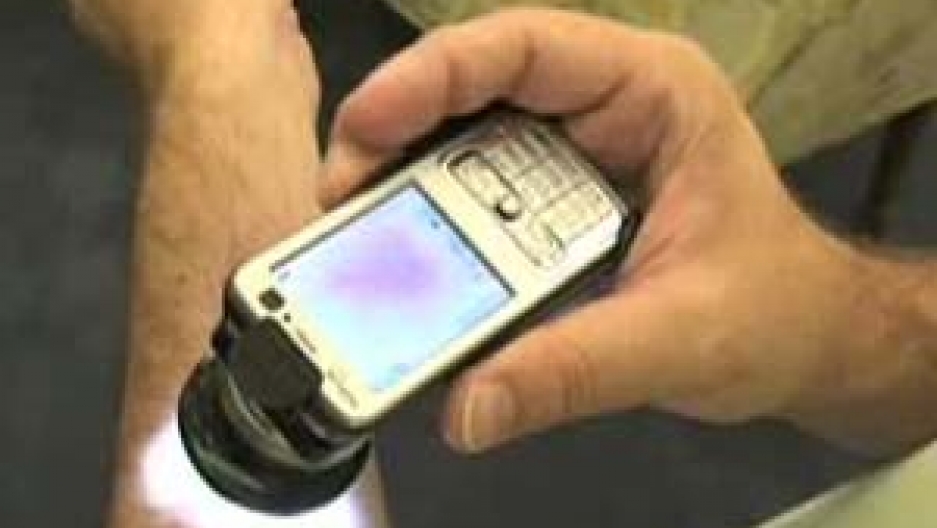 The CellScope turns a conventional smartphone into a microscope. (Image: theworld.org)

The Vodafone Americas Foundation is a non-profit arm of the mobile telecom giant Vodafone. The foundation recently ran a competition called the Wireless Innovation Project. It sought ideas on how new wireless technologies can help solve problems around the globe. More than 100 applicants responded. Vodafone then chose three projects to fund.

"The World’s" Technology correspondent Clark Boyd checked out the winners.

Part of the idea behind Vodafone’s Wireless Innovation Project involved applying some venture capitalist-style thinking to social and developmental goals like overcoming disease and micro-lending. Peter Suh is President of Vodafone Ventures. He says that the global market for wireless technologies has huge potential, both for profit and for doing good.

The same places where things like poverty and infectious diseases are also prevalent. And so while the Wireless Innovation Project was only open to applicants from the US, most entries looked far beyond America’s borders. The three winners are no exception. A group from Columbia University will get $300,000 dollars to study ANTs -- that’s short for "Active Networked Tags." These small, wireless devices can be embedded into everything from buildings to people’s clothes. The tags don’t need batteries; they can harvest energy from sunlight or even motion. That means they are always on.

And, in the event of an emergency, like an earthquake or a tsunami, the tags can talk to one another, says Columbia’s Peter Kinget: "The active tags can communicate with each other, and that’s why they can build up a network. And that’s a crucial aspect in the disaster recovery application, because that allows you to go ask the network where people are, how the structure is, where it came apart, and where people are compared to each other."

With enough tags in place, disaster teams wouldn’t need dogs or scopes to look for survivors in the rubble, according to Gil Zussman, another member of the Columbia team: "We see the rescue forces coming to the disaster site, bringing equipment which includes receivers that are deployed around the disaster site and starting to pull out the information. This whole system will be much more efficient and allow them to allocate resources more efficiently to rescue the people that really could be rescued."

The other two winners focused on cell phones and their imaging ability. A team from UC Berkeley won $200,000 dollars for what Professor Dan Fletcher and his team call a CellScope: "Our device basically turns a conventional smartphone into a microscope. So any camera enabled mobile phone doesn’t require any modification. We attach something to it and that allows it to image things that are much smaller than the eye can see. And we’ve designed it specifically to do diagnosis of tuberculosis and to look for malaria in red blood cells. And to be able to give the same image a doctor would see in a clinical microscope. We want to be able to see that out in the field."

Fletcher envisions the CellScope being used in rural areas of the developing world. A field worker could prepare a slide, snap a microscope quality shot of the blood sample, and then send the image, via the same cell phone, back to a clinic for analysis. The diagnosis could then be sent quickly, via cell phone text message, back to the field worker.

Aydogan Ozcan is a professor at UCLA. His team is working on what they call a Cell-o-Phone. Instead of attaching a microscopic lens onto a cell phone camera, Ozcan’s team, well, completely removed the lens. He says that samples are placed directly on the camera’s imaging sensors, creating holograms of those cells.

Ozcan says the device could be useful for performing tests for malaria, HIV, or even doing pap smears in remote areas. But, like the other winners, he sees applications in the developed world as well. There’s no reason, he says, that his device couldn’t be used to improve the kind of cell counting and characterization needed to treat cancer patients.

See pictures and short video demonstrations of all three of those projects.