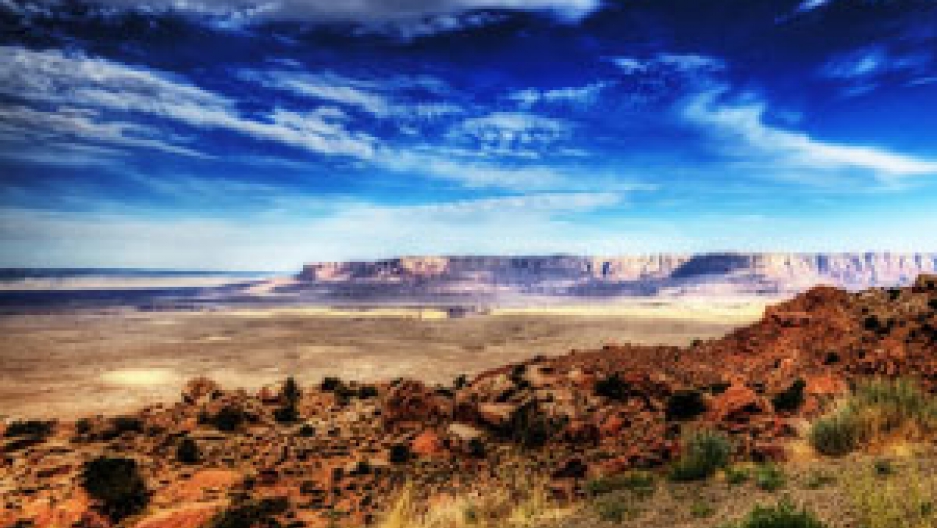 Probably what comes most immediately to mind when people talk about climate change is melting ice. But maybe we should also consider -- the taste of wine and genocide.

It turns out our changing climate is shaping our present and future in mysterious and diverse ways. To flesh out some consequences of climate disruption, author Stephan Faris traveled the world to bring us a forecast -- in his new book called "Forecast: The Consequences of Climate Change, from the Amazon to the Arctic, from Darfur to Napa Valley."

Stephan Faris says linking the dots from climate change to the conflict and refugees in Darfur was illustrated vividly in a tale he heard from a doctoral student called Alex de Waal: "This doctoral candidate named Alex de Waal came across this Arab sheik, who was kind of a big man in that region, and he invited him into his tent. And he actually draws a picture in the sand like a chessboard, and he says, the black tiles are where the African farmers are, and the white tiles are where are our people are, where the nomadic herders are. And we basically coexist, we're like chessboard bishops: we cross these places in diagonals. And the land in a sense is serving two people. But that's no longer working. Alex later on called this the moral geography of the region.

"Up until the 1960s and 70s the farmers would plant their crops and the nomads would pass through. They'd graze their camels on the hillsides behind the crops, the farmers would allow them to use their wells, they'd feed the animals with the leavings from the harvest, and you had this kind of symbiotic and peaceful relationship.

"But in the 70s and 80s you had this terrible draught, that some are saying is driven by climate change. So all of a sudden the land degraded, the rainfall wasn't coming as much, the crops weren't able to grow as much. And all of a sudden it was not enough to support the farmers and the herders, both. And so the farmers started closing off their land and started providing fences. And so you had this tension between the farmers, who were the landowners, and the nomads, who had these traditional ways of coexisting with the landowners, but didn't have any formal property rights. And this sheik was incredibly disturbed by this idea that this moral geography was broken, that his people and the farmers were no longer getting along.

"And about two decades later, when the violence that we've all heard about was breaking out, Alex remembered this story, because he saw that the leader of the Janjaweed, a man named Musa Hilal, was leading these campaigns of ethnic cleansing. And he realized that Musa Hilal was the son of the sheik that he'd met before, the sheik that was fearing about the future of Darfur."

The thesis of Faris's book is that climate disruption is just putting pressure on a lot of difficult places on the planet, and already making life quite difficult, and it's only gonna get worse: "Sure. And it was a way to look at climate change that had always seemed to me as very abstract, something about melting glaciers or drowning polar bears, or the most relevant it is to me is maybe something like hundreds of years in the future, when Florida's underwater. But what struck me about Darfur, and what motivated me to keep on doing the research in this book, was that the effects are happening already. Our climate is changing; it's changing in ways that we've never seen it before as a civilization. And every one of those changes is going to be disruptive. Even if places like Darfur and or like Hurricane Katrina we can't definitively tie them to the emissions of our cars and our factories and our power plants, the fact that these types of effects are the type of effects that we're expecting to see gives us a glimpse into the future."

Over the near term, there are some positive effects from warming climate, according to Faris: "Well, if you think about what makes a good wine, you've got basically three elements. You have the variety of the grape, which is the Merlot or the Cabernet. You have the soil, in which you plant it. And then you have the climate, the weather, the year that it was grown. And so there's actually a scientist in Oregon, named Gregory Jones, who's tried to go through the whole world and understand how wine has played out. And he's looked at different regions from 1950 to 1990, and he's found that, on average, his temperatures increased about a degree Fahrenheit in those regions. And then he looked at the scale of quality given by auction houses, and he says, that a degree rise in Celsius would lead to about a thirteen point rise on a hundred point scale in quality. And so, so far, climate change has actually benefited wine.

"But as temperatures continue to increase, and generally that's what they're going to be doing, the wines are going to start getting worse and worse, the grapes are going to start ripening too early on the vine. The year 2003 in Europe was a terrible year for wines because it was so hot that people were picking in August, they had never picked so early before, they were actually hiring refrigerated trucks to keep the grapes in. And one of the wine critics I've spoken to kind of describes the wine there as being raisiny and she's worried that the quality's going to degrade very quickly with time.

what Faris forecasts for the world if we see the more dramatic temperature increases that science is talking more and more about: "What worries me the most is that everything I covered in my book, which covers potential conflicts in South Asia, it covers immigration pressures, it covers the changing patterns of agriculture – is all stuff that we're going to experience almost no matter what. None of the proposals in Washington or in Brussels or people who are speaking about replacing the Kyoto protocol are really talking about capping climate change at anything less than about two degrees Celsius, which is about three and a half degrees Fahrenheit. The potential is that we could have you know four or even six degrees Celsius of warming, which is about 11 degrees Fahrenheit, and that's about the same level of magnitude difference as we had between now and the last ice age. And so the question is what happens next."

Stephan Faris is the climate change correspondent for GlobalPost.com and the author of the new book "Forecast: The Consequences of Climate Change, from the Amazon to the Arctic, from Darfur to Napa Valley."