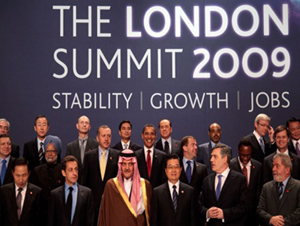 President Obama is calling the G20 a turning point in the pursuit of the global economic recovery. Today Mr. Obama and other global leaders ended the summit in London on a high note. They emerged with an agreement on a series of measures to pull the world out of an economic crisis.

Those measures include additional mony to pump up failing economies, and new global rules to crack down on abuses in the world of banking and investments.

"The World's" Laura Lynch reports on the plan that came out of the G20 meeting in London. It includes more than one trillion dollars for the International Monetary Fund.

All the talk of disagreement and divisions among the leaders seemed to fade away in the final hours of the summit. British Prime Minister Gordon Brown boasted they had found a way forward:

"This is the day that the world came together to fight back against the global recession -- not with words, but with a plan for a global recovery and for reform, and with a clear timetable for its delivery."

The plan includes a pledge of $1.1 trillion dollars for the International Monetary Fund. Some of the cash would be loaned out to countries with faltering economies to stop them from crumbling altogether.

The pledge includes $250 billion dollars for a bank overdraft fund. It's meant to provide another vital source of credit for cash-strapped developing countries. Brown calls it a profound restructuring of global finance:

"I think the new world order is emerging, and with it the foundations of a new and progressive era of international cooperation. We have resolved that from today, we will together manage the process of globalization, to secure responsibility from all and fairness to all. And we've agreed that in doing so, we will build a more sustainable, and more open and a fairer global society."

That means tighter regulations for banking and bankers' pay. A new blacklist will be published, naming and shaming secretive tax havens. That was something France's President Nicolas Sarkozy had been pushing hard for. The outcome left him smiling.

The leaders also vowed to block protectionism and boost trade, and when Barack Obama took his turn before reporters, he labeled the deal a turning point. But he admitted he had to compromise, even though he wouldn't say exactly where:

"I think we did ok. When I came here, it was with the intention of listening and learning, but also providing American leadership. And I think that the document that has been produced, as well as the concrete actions that will follow, reflect a range of our priorities."