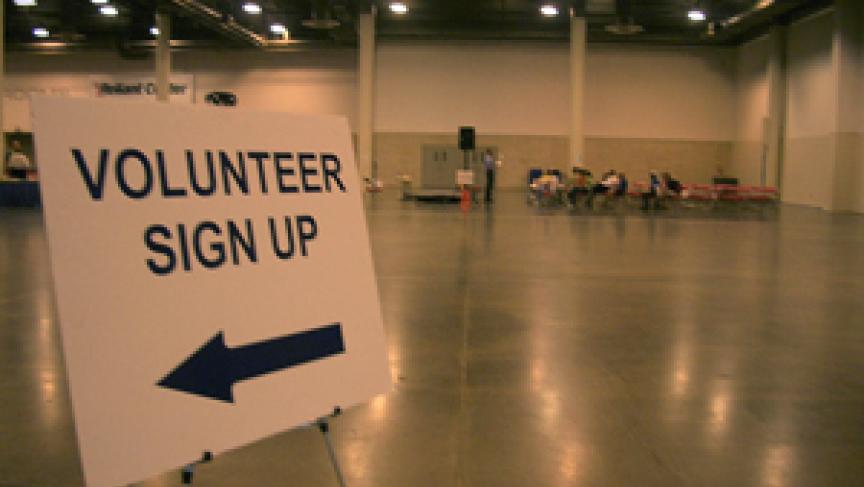 Britain is suffering its worst unemployment crisis in more than a decade. But not everybody who's out of work is in despair. Growing numbers of people are looking at this as a rare opportunity to volunteer. As The World's Emma Kwesiga Lydersen reports, many are signing up to go abroad.

Fifty-seven year old Lynette Savings thought she had a job for life at a London health charity, but last November, she was laid off. Rather than panicking, Lynette decided to try something she's always wanted to do.

"I'd been interested in volunteering for quite some time. I'd got the forms, never quite managed to fill them in. Then I got made redundant and after doing the usual kind of panic thing of applying for every job in sight, I then sort of stood back a bit and thought, "What do I really want to do?" And it was volunteering abroad."

Lynette plans to head off to Vietnam, to volunteer for a health and development organization. She got that job through the Voluntary Services Organization, or VSO. VSO was established back in the 1950s. At the time, it targeted young people, fresh out of school.

These days, there's no shortage of people with something to give. VSO says it received twice as many enquiries last year as in the previous year. Michelle Turner is VSO's head of volunteering. She says applications from people with business, management or IT backgrounds are up more than 20 percent.

"The economic situation's a key factor. We've seen volunteers who are taking advantage of their employer's leave of absence schemes. We've seen people who are volunteering to ride out the recession. But most of the volunteers are like Lynette who've been waiting to volunteer for a long time, and either retirement or redundancy has just triggered her to fill out an application form."

But volunteering doesn't come cheap. VSO volunteers have to raise about $1,300 before they go abroad. In return, VSO pays their travel and living expenses. Many other volunteer opportunities have much higher out-of-pocket costs, but Tom Griffiths of the group Gap Year dot com says the costs and benefits of a year abroad can’t be measured in money.

"Really, the positive mindset you come back with, that’s the big thing. You can really tell the difference between the type of person who’s done one of these things, and somebody who hasn’t. This type of person is really invigorating, they really know what they want to do. They’re so full of life and energy. So it’s a positive thing."

Lynette Savings says so far it is for her. She’s not worried that her Vietnam adventure will set her back.

"Well apart from working abroad and doing something useful, I want to use the skills that I’ve got, the management skills. And the project I’ll be working on will use those, and I also think that we’ll be in good set when I come back."

Savings says she expects it will look good on her resume.