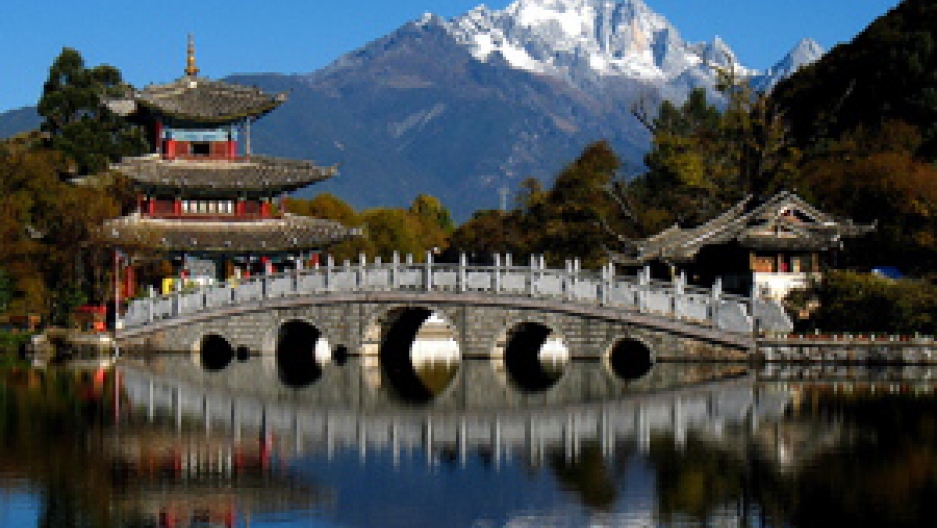 In China, decisions about economic development and infrastructure projects are generally handed down from above. Affected communities rarely have any meaningful say in the process, and are left to deal with adverse social and environmental impacts as best they can. “Living on Earth” reporter Elise Potaka discovered at least one community is forging a new path in southwest Yunnan province.

Lijiang’s traditional architecture and view of the snow-capped Mount Yulong make it one of China’s most popular tourist destinations.  Major attractions are the streams, canals and wells, which criss-cross the town’s narrow alleyways. In the past, Lijiang’s water came from the snow melt of Mount Yulong. But the snow has been disappearing for more than a decade now, probably due to a changing climate.

With less run-off, the city’s water levels also began to drop. Concerned that the diminished water in the canals would draw fewer tourists, local officials went in search of another water source.

About half an hour outside of Lijiang is Lashi Lake. It was here that the government, in the late 90’s, built a dam, diverting forty percent of the lake’s water to the streams and canals of Lijiang. With a total area of over 2000 acres, and more than 3000 people living close by, the impacts have been huge.

Niang Yao Jun, from Xihu village just up hill from the shoreline, says they used to live off fishing and growing crops near the lake. But the dam changed all this.

“Our fields were flooded, so we asked authorities to solve the problem and give us farmers other land. They helped us plant potatoes but when the rainy season came ther were landslides, erosion and other problems like that.”e

Looking for a longer term solution, farmers engaged the support of researchers from a small local environmental group called Green Watershed. The researchers suggested that agro-forestry could be part of an environmentally sustainable way to make a living. Along with their crops and livestock, villagers could grow trees to hold the soil and they could sell some of the timber.

Now villagers can make an annual profit of about 3000 U.S. dollars per acre from the timber. This has almost replaced the income that villagers lost when their fields were flooded.

While the group Green Watershed has been integral in setting up the programs, it’s a partnership, which emphasizes the importance of local knowledge. “Local people understand this area more than we do. In our opinion they’re the real experts,” says program officer Hu Chengshen.

Professor Yu Xiaogang, founder of Green Watershed and winner of the Goldman prize for the environment, believes the project could be used as a model for other communities affected by developments like dams. He says the key is to give the community a stronger voice.

Green Watershed first found that local people were marginalized from the decision-making process. To changes this they set up local committees to make decisions about fishing and water use. At these local gatherings, villagers can now exchange views and present their ideas to other stakeholders including local government representatives.

Most recently, villagers and NGOs proposed that some of Lijiang’s tourist profits be shared with upstream communities. “This payment will further encourage the local people to have more sustainable projects to manage this resource,” says Professor Yu.

Starting next year, some of Lijiang’s billion-dollar tourist profits will be sent to Lashi Lake to be used on nature conservation and poverty alleviation. The aim is to channel around $290,000 U.S. to villages each year.

At the lake, villages are working together to rebuild the fishing industry, as well as initiate small-scale tourism.

Locals know the challenges are far from over, but now they have a new set of survival skills and, more importantly, a seat at the decision-making table.