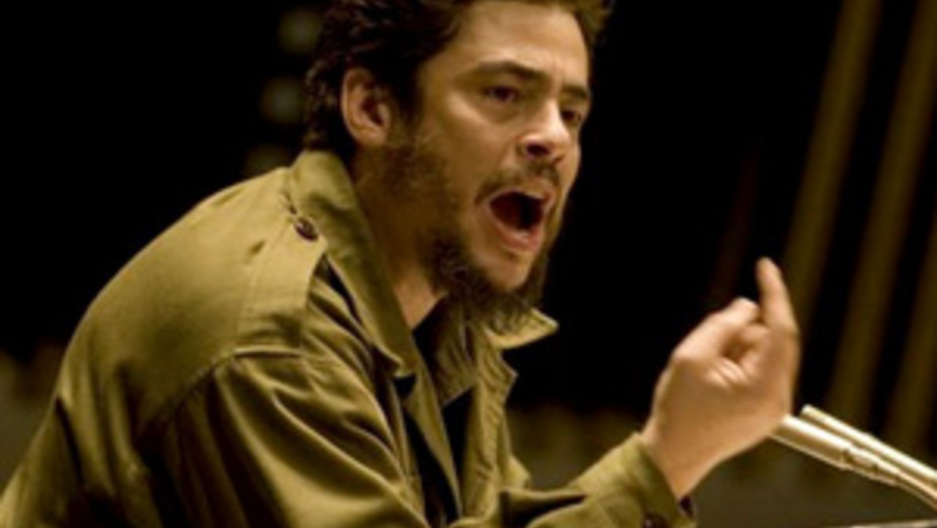 Funny thing how music from childhood can foreshadow something big later in life.

That line from the old Rolling Stones tune "Indian Girl" stuck in the memory of actor Benicio del Toro. He first heard the song when he was growing up in Puerto Rico. Now -- about 35 years later -- del Toro is portraying Ernesto "Che" Guevara in a two-part film called "Che." Del Toro co-produced the film. Steven Soderbergh directed it.

The two parts depict the main battles Che led in his life. There was the Cuban revolution that brought his companiero Fidel Castro to power. And there was the "cult of Che" -- formed around this Argentinian-born revolutionary, as he tried to convince peasants in one Latin American country after another to take up arms. You see their lives in the mountains and jungles.

Part of the movie focuses on Che's visit to the United Nations in 1964. He delivered scathing assaults on American imperialism.

del Toro says of Che's U.N. address: "I think to me ... that black and white section of the movie where he was in New York City for ten days -- that's kind of like the interior monologue of the character. That's what he believes in, that section becomes what he stands for, verbalized. And his poetry, that U.N speech is basically ... Shakespeare Spanish ..."

"If you understand [his] success in Cuba, the drive that got him there, which is the history of Latin America ... Latin America has been, since the time that the Spanish came, has been reckless to say the least ... reckless with their people. So knowing all that history and how many times Cuba wanted to be truly an independent country ... it wasn't until Fidel Castro and Che decided to take action. And the only way they saw fit was armed struggle, and they were successful ... then you  understand a little bit of ... what you can call in him mad, or guts ... the man behind the t-shirt."