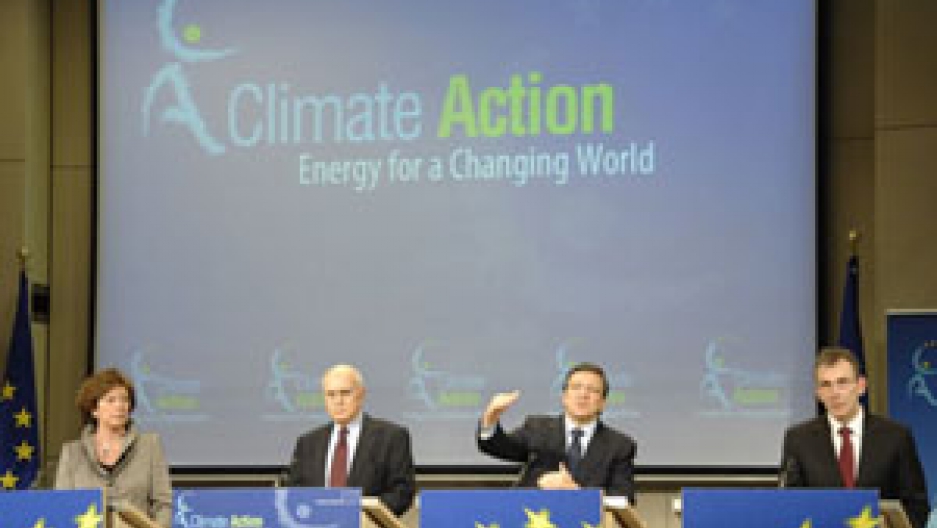 The EU presented a plan of action back in January of this year. (Image: ClimateAction)

In 2007 the European Union put its 27 member states on the front lines of the global warming battle by promising big cuts in greenhouse gas emissions. But a lot can happen in a year. Reductions have not been so easy for Italy, Spain and Eastern Europe, and with a global financial crisis to nurse, there are added fears that compliance will come at too high a price.

Matt McGrath -- an environmental correspondent with the BBC World Service who has been following the current round of the European climate negotiations -- says the EU doesn't seem so enthusiastic now about getting to decreasing its greenhouse gas emissions:

"Yeah, there's a chill wind blowing through the corridors of Europe at the moment and all that great unity of the 27 members seems to be going out the window a little bit. You remember just a year ago, they were talking about cuts of 20 percent of emissions by 2020, 20 percent improvement in energy efficiency by 2020 and 20 percent commitment to using renewables by 2020. All the twenties, as they call them. But now, after everything that's happened with the economy and as the realization of how much this actually means in real terms is dawning on the leaders of the EU, there are some very, very cold feet, particularly in Eastern Europe, but not just there, in Germany as well and Italy – all over we're seeing an outbreak of 'well, we need to be a little bit more flexible about this.'"

McGrath explains how current economic woes factor in: "I think there's just a general fear that the cost of the implementations, particularly in some countries, will make jobs disappear and at this particularly crucial time when we're talking about spending billions of dollars around the world to save the banks, when people are fearing for their jobs as well, to be putting up the costs of making cars in Germany or whatever it might be and helping export those jobs to other parts of the world – that is a real political no-no, that's something that no politician will want to do. So Angela Merkel, the German Chancellor, the most committed European in terms of driving these targets, is now starting to talk about backing off to protect the native industry that are very important to Germany, the big, heavy coal and steel industries, car manufacturing. Those are the jobs, and those jobs are held by people who vote, and they vote in German elections, and that's the political reality meeting the "ideal," if you like, in terms of the climate."