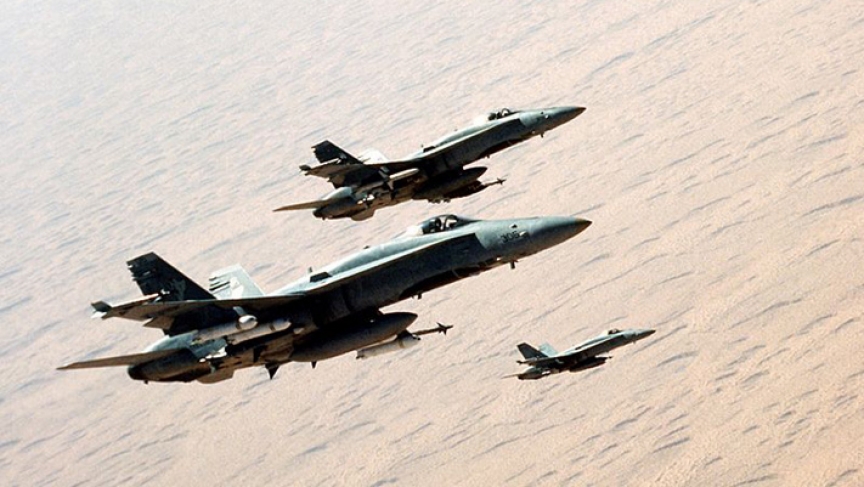 The 1991 Gulf War was a different kind of war for a different kind of time. Vietnam, and the quagmire it represented, was receding into the past. The humanitarian interventions of the 1990s were not yet on the horizon. The Cold War was coming to a close and a new world of international cooperation seemed to be dawning.

The Gulf War unfolded almost without a hitch. And  unlike Vietnam, the ending seemed clean. But it didn't take long for that image to unravel.

When US troops returned from the Persian Gulf in 1991, they were treated to victory celebrations and a ticker tape parade. It was the parade Vietnam War veterans never got.

In his autobiography Colin Powell describes the thrill of riding up Broadway in New York in a 1959 Buick Convertible. He and other architects of the Gulf War had cut their teeth in Vietnam. In planning the engagement with Iraq, they had one overriding goal: This war would be short and sweet.

The crisis began when Saddam Hussein invaded Kuwait on August 2, 1990. Over the next few months, the United States worked to build an international coalition to take action against Iraq.

"Just two hours ago, allied forces began an attack on military targets in Iraq and Kuwait," he said.

President Bush stressed that the action had the consent of the United Nations and Congress. He said the goal was to drive Saddam Hussein out of Kuwait. And he promised that the coalition would act quickly and forcefully.

"I've told the American people that this will not be another Vietnam, and I repeat this here tonight," the President said. "Our troops will have the best possible support in the entire world and they will not be asked to fight with one hand tied behind their back."

The President was able to keep his promise. In little over a month he was back in front of the cameras.

"Kuwait is liberated," he announced. "Iraq's army is defeated. Our military objectives are met."

These were short sentences used to describe a short campaign: six weeks of air attacks and a mere four days of ground operations. And when he addressed the troops by radio a couple of days later, the president proclaimed that the ghosts of that previous conflict had been exorcised.

"The spectre of Vietnam has been buried forever in the desert sands of the Arabian Peninsula," he said.

The men who prosecuted the 1991 Gulf War were deeply influenced by Vietnam. At the time Colin Powell was Chairman of the Joint Chiefs of Staff. He played a key role in ensuring the war was brought to a swift end.

General Norman Schwarzkopf remembered feeling relieved and surprised by the speed of the conclusion.

"All of us were stunned by the fact that we'd achieved victory so quickly, with such a low loss of life on the part of our forces," Schwarzkopf said in an interview. "And it took a very long time for that to sink in. I mean we had won a stunning victory at almost no cost relatively speaking and everyone of us was kind of walking around weeks later shaking our heads afraid that you were going to wake up from this wonderful dream you were having and find yourself in a nightmare."

The endgame was not a nightmare for the Americans, but it turned into one for the Iraqis. During the conflict President Bush had encouraged the Iraqi people to overthrow Saddam Hussein. Now, at the end of the war, Iraqi Kurds and Iraqi Shiites tried to do so.

But having called for the Iraqi people to rise up, the first Bush Administration then abandoned them. Saddam's forces crushed the rebellions, killing tens of thousands of people. US forces still on the ground in Iraq stood by and watched.

"So what had been a brilliant military campaign and a great success at the end of February began to look like a fiasco at the end of March," says Peter Galbraith, a former US diplomat and the author of two books about Iraq.

Galbraith should know. In the late 1980s, he was instrumental in documenting Saddam Hussein's atrocities against his own citizens.

At the end of the Gulf War the Iraqi leader's ability to crush the internal rebellions was made easier by a fatal mistake on the part of the Americans. During ceasefire talks, Iraqi military leaders asked General Schwarzkopf for an exemption, in order to use their helicopters. Their bridges were all destroyed, they argued, and they needed to ferry officials around the country. Schwarzkopf was later interviewed about it.

"That seemed like a reasonable request and within my charter I felt that that was something that it was perfectly all right to grant," Schwarzkopf said.

But instead of using the helicopters to transport government officials, the Iraqis used them to gun down civilians. Schwarzkopf said he felt used.

"I think I was suckered, because I think they intended right then, when they asked that question, to use those helicopters against the insurrections," he said.

But Galbraith said Schwarzkopf's justifications were absurd. He said US commanders should have responded, as soon as they realized what was happening.

"After all, for a victorious power dictating the terms, to allow an exception for helicopters to fly government officials around doesn't mean that you've made an exception to allow them to use those helicopters to gun down civilians. And so, that really was inexcusable. I think it was inattention. I think it was really a focus - their minds were someplace else. They wanted this thing to be over," Galbraith says.

Everyone wanted the war to be over. Especially President Bush. But there were some missing parts to this ending. At a White House briefing, the President made it clear to reporters that he felt something wasn’t quite right.

"You know, to be very honest with you, I don't, I haven't yet felt this, this wonderfully euphoric feeling that many of the American people feel," he said. "You mentioned World War II. There was a definitive end to that conflict. And now we have Saddam Hussein still there."

Not only was the Iraqi leader still in power, his Army was not destroyed. The game plan had been to deprive Saddam of his troops by surrounding them as they fled Kuwait, and forcing them to surrender. But then Washington became fixated on ending the ground war at 100 hours.

General Schwarzkopf himself declared the gates closed. But in fact there were gaps in the line and Iraqi Republican Guard units were streaming northward, out of the clutches of coalition forces.

"He then turned around and made his defeat into a victory by telling the Iraqi people and the Arab world that his army had stopped the Americans at the Euphrates river line, and therefore he was the victor in the mother of all battles. It was a pure lie, but we never understood that you must make your enemy know he is defeated by having him admit his defeat," he says.

There are plenty of people who argue the United States should have fought on in 1991, but Galbraith says that whole debate is a red herring.

"There was no need for US troops to go on to Baghdad. The US simply could have enforced the ceasefire that Iraq had already accepted, specifically insisted that Iraq not fly its helicopters, not use them for military purposes, and that Iraq not move its tanks and other military units," he says.

Galbraith believes that had the United States done so, the internal uprisings would have succeeded, and Saddam Hussein would have been ousted there and then. In his view, the leadership in Washington lost sight of what it was fighting for.

"It was an odd moment. After all, the first President Bush compared Saddam Hussein to Adolf Hitler. And then he simply allowed the man he'd called the Hitler of the Middle East to engage in mass murder against his own people. There was a real disconnect between the rhetoric and the arguments for the war and the reality on the ground," he says.

Several weeks after he’d announced the war over, President Bush found himself on the defensive.

"Of course I feel a frustration and a sense of grief for the innocents, that are being killed brutally, but we are not there to intervene," he said. "That is not our purpose. It was never our purpose. I do not want to see us get sucked into the internal civil war inside Iraq."

But in the end, the humanitarian catastrophe proved too large to ignore. Hundreds of thousands of Iraqi Kurds fled over the border into Turkey, where they struggled to survive in refugee camps. The United States launched Operation Provide Comfort to deliver aid to them. Months after the war was officially over, the US used its troops to carve out safe havens in northern Iraq so that the Kurds could return to their homes. Here was the mission creep that President Bush had sought so hard to avoid. It was certainly a much messier ending than promised.

But political scientist Stephen Biddle says we shouldn't expect neat endings in war. He himself even shies away from using words like “victory” or “defeat.”

"Most wars don't end with this kind of extreme, binary, one-sided outcome," he says. "They generally end up in some sort of negotiated deal, which secures neither side's war aims completely. Our most important war aim was unambiguously secure. Saddam Hussein did not have control of Kuwaiti oil fields after 1991, but there were a variety of other war aims that lots of Americans thought were worthwhile that were not secured, and the result wasn’t as happy for us as many expected it to be."

The United States ended up maintaining forces in the region for years to come. It also patrolled the skies over Iraq, launching sporadic airstrikes against Iraqi targets.

Twelve years after the Gulf conflict, it went to war against Iraq again.

For Galbraith there's an eerie parallel between the two wars. In his view, both Bush Administrations paid too much attention to their military campaigns and not enough to securing important political objectives in the aftermath.

"We're not going to win wars simply by smashing the enemy," he says. " We can't eradicate the enemy. We need to think about and be able to plan and put resources into what follows. And that's really the great failure. And it's an incredibly costly failure."

And one that ultimately made Iraq feel a lot more like Vietnam than the Gulf War planners of 1991 ever intended.