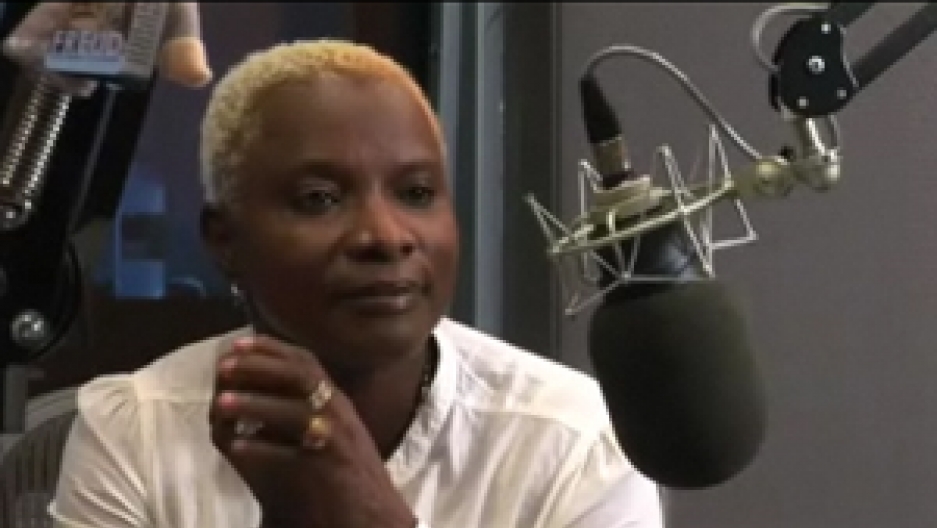 It's a fair bet to say that Benin singer Angelique Kidjo has thousands, if not millions of fans around the globe.

Her Grammy award winning career stretches over 20 years. She's been a UNICEF Goodwill Ambassador for over five. And while fans adore her, Angelique Kidjo herself is an adoring fan of OTHER musicians.

She came by our studios to tell us who she listens to and what's on her iPod:

These are the songs on Angelique Kidjo's iPod:
# A Tale from Pan's Labyrinth. Composed by J. Navarrete
# Habibi by the Lebanese singer Fairuz
# State of Independence by Donna Summer
# Language Classes! Right now, Kidjo is learning Portuguese

Some listeners got in touch about one particular song by the great Lebanese diva Fairuz.. They thought it sounded strangely familiar.
The lyrics were composed by Fairuz's long-time Lebanese songwriters and collaborators the Rahbani Brothers. Listener John Herlihy wrote to ask why the song "Habibi" has the same melody as a well known Russian folk song, "Polyushka Polye."

He wondered if there's a connection. Indeed there is; the song actually goes by three different titles.

There's "Polyushka Polye." It also goes by "Meadowlands," if you heard The Weavers perform it. Some musicians also bill it as "Song of the Plains." I found this 1968 Russian recording of it, with composing credits attributed to Messrs Knyipper, Guszjev and Raics.

That version is on a compilation called "Best of Communism." Which proves once again that even if you tank, you can still put out a greatest hits album. But how does a Red Army anthem get to Lebanon?

A call to Fairuz's first violinist for over twenty years, Lebanese violinist Joseph Chamaa, now lives in California, said, “I remember that the song (SINGS) is a Russian song. But I don't know the name of it originally. I know many songs from Russia, because they go all over to other countries.”

One more call, this time to Dawn Elder, a Lebanese-American and a music agent revelaed that Lebanon was never a satellite in the Soviet sphere of influence. But Russia had pull musically with Lebanese musicians.

“Many of the great young composers or master musicians either migrated to Paris, studying at the conservatoire in Paris or in Russia with the Moscow Symphony. So you saw tremendous intermingling between styles between Lebanon and the European and Russian world.”

So a Russian tune with political meaning got a new treatment in Arabic as a love song.

Listener Henry Molumphy pointed out that the song got stretched even further.

He wrote: "I first heard it in English on one of my mother's Paul Robeson records from the 1930s."

So we'll leave you with Robeson and his treatment of Polyushka, or Habibi, or Meadowlands, or Song of the Plains...regardless of language...the melody remains the same.