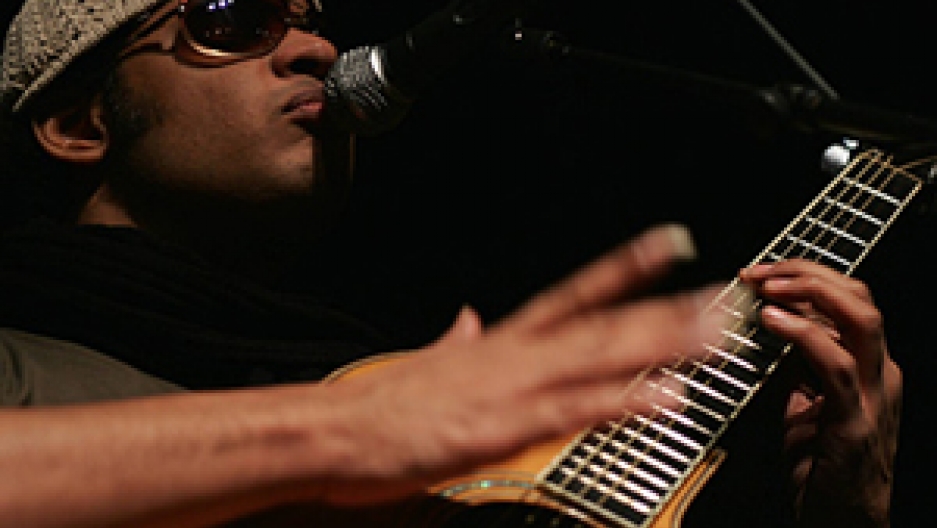 Share
Paul Midon grew up in New Mexico. His family is African-American and Argentine. And Midon writes songs that combine those influences.

His key vocal influences are Stevie Wonder and Donny Hathaway.

His guitar style brings in a life-long affair with flamenco and a few other latin idioms.

Midon: There's one song on the album called "Tembererana" which is based on a rhythm from Argentina called carnavalito, and I used that rhythm, and I use traditional instrumentation that would be used in playing the carnivalito, bombo, charango, and quena, and it's sort of a pop song. So in this record particularly, the Argentine influence was there.

Here are a few notable facts about Raul Midon:
- He is blind.
- His twin brother - also blind - is an astrophysicist at the Goddard Space Lab.
- Their mother died when they were young.
- Raul and his brother were raised by their father.
- He recognized Raul's talent.
- And when the boy was six, his dad started him in guitar lessons.

Midon: The first guitar lessons I had were all flamenco, so the first things that I learned on guitar and the way I learned to play guitar was from a flamenco perspective. So it's a very important part of guitar for me, and particularly the rhythmic approach and the percussive approach to guitar playing that's in flamenco.

Midon: My father actually owned a restaurant in which there was a flamenco show every night, and of course I was fascinated with it and I would go to this club, which, I was pretty out of place being a five or six year-old child, and going to this club at night and listening to this pretty intense music.

Midon: Something that I've always heard in my head, and it started I guess with flamenco, but it was this idea of having percussion and chords at the same time, and somehow making that happen with one instrument. And so, I think you know when I moved to New York and found myself in sort of situations playing solo, to people that were really not there to see me and I really had to get their attention.

Global Hit is a music segment from PRI's "The World," a weekday radio news magazine offering a mix of news, features, interviews, and music from around the globe. More "The World."