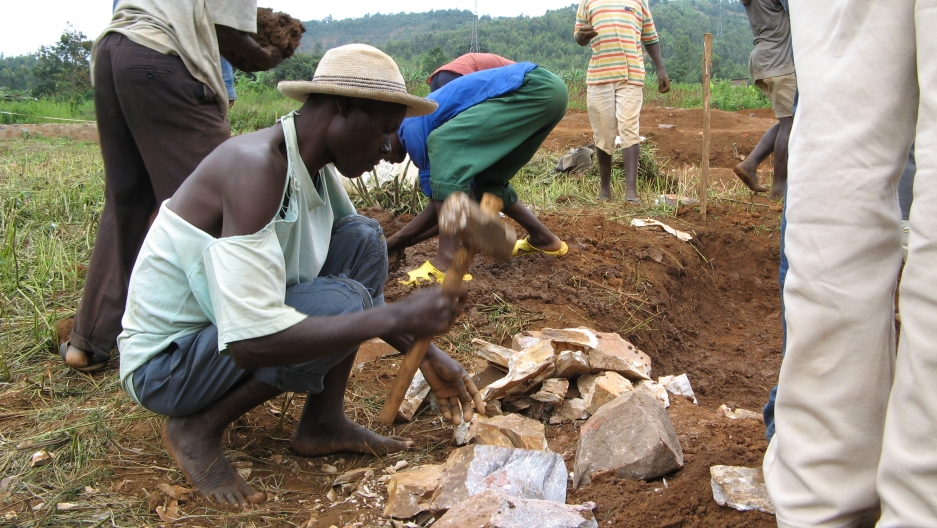 A TIG camp outside Kigali, Rwanda.

The Rwandan government wants justice for the victims, but it also wants to promote reconciliation. So it's created a program of community service. It's designed to help confessed killers ease back into society.

The program is called "TIG" -  it's an acronym for a French expression meaning 'community service.' More prisoners are finishing their sentences with a year or two in the program. They work on agricultural projects and in quarries. They also build houses and roads. Some commute from home; others live in camps at the work site.

At a TIG camp outside Kigali, ex-prisoners are building houses for homeless genocide survivors. About 200 men work here. They're known as "tigistes." Some are clearing ground, others are breaking and hauling rocks, some are mixing mud for foundations.

Leopold Burangayija coordinates the work at the camp. He says he is surprised how much the tigistes seem to enjoy the labor.

The program is designed to prepare the tigistes to re-enter society. It provides the structure of a work day, it teaches new skills.

And then there's the indoctrination.

TIG official Theophila Nyirahonora uses words like re-education and sensitization. She says the objective is to change the mentality of the tigistes, what she calls their "old" ideology. She puts forward the optimistic government line that these men will be able to reconcile with survivors.

"These men are absolved of their crimes. They've accepted what they've done. And people in their communities accept them back too. They know these men have confessed and served their sentences. And so they're not afraid of them. They can work together and live side by side again," Nyirahonora says.

Jean Baptiste Rudasingwa is one of the tigistes. He agrees to talk to me. He says he is guilty of participating in a killing. He says he didn't kill directly, but he was present when a Tutsi victim was murdered. He says he should have tried to save the victim. Instead he stood by. Rudasingwa's excuse is a familiar one. 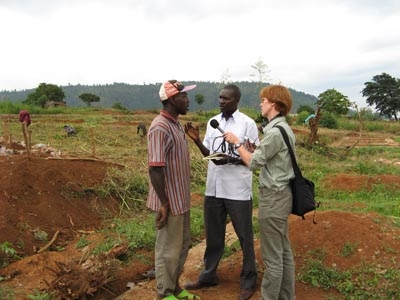 "We were being scared the government was scaring us to do that we were being forced to do that. I was afraid. I was scared for my life because we were told if you don't do that you are being fined or sometimes you can even be killed," he says.

Rudasingua says he is grateful to the current government for letting him finish his prison sentence by doing TIG.

"Because normally someone who killed the person has either to be killed or something heavier than that. So, when I look at myself at this particular place here today and with the crime I committed for sure I feel overwhelmed to the current government for what they're doing for me. And in fact I'm happy to do this work here of TIG because I know it's part of what I'm supposed to do," Rudasingua says.

He says his confession has helped his relationship with survivors of the genocide.

"If you tell a victim how his or her beloved ones were killed and where the bones were thrown and then they maybe go and dig out the bones and bury them in the official way they feel better and then sometimes for us we feel better because we feel released from the tension we have," he says.

Survivors of the genocide may beg to differ.

Some of them complain bitterly that the TIG progam is too lenient. But Rudasingwa speaks with confidence. He is forthright and relaxed.

His fellow tigiste Marcel Dusabemuremu is not. He's tense. He looks troubled. But Dusabemuremu has reason to be troubled. He killed a 7-year-old boy.

"There was a war and the leaders told us to go and kill Tutsis. We took other traditional weapons, like machetes, we took clubs, we took other weapons and then we went for the operation. We were four of us. We went and found some children hiding somewhere four of them again. So each one picked a child. So I picked one and I killed one and everyone killed one one one," Dusabemuremu says.

"Did you know the child you killed?" I ask him.

"Yes this child was my neighbor," Dusabemuremu replies.

"And what was the name of the child?" I ask.

"It's very difficult to stand and hear your story. It's hard to imagine killing a child and I wonder if there's anything else you can tell me to help me understand," I say.

Dusabemuremu stares past me as he speaks. His answers seem rote. Like excerpts from an official confession. It's hard to gauge his tone though-the meeting is brief and the language barrier is large. He says he knows what he did was wrong. But if he's remorseful, I can't sense it.

Alexandre Gatembe represents a group of genocide survivors. He has come here to check on the progress of the construction. I ask him how he feels about the tigistes. He says he talks to them every day. He says killers and survivors, Hutus and Tutsis must reconcile. What better way to do that, he says, than have perpetrators build homes for survivors.

"If there is no reconciliation there is no people of Rwanda. We are going to die one after one and there is no future for our kids so it's a must for us. It's a must," Gatembe says.

But Gatembe acknowledges it's painful.

"What can I say? It's a kind of stone which you put on your head and which is very heavy. So as far as the days are going on you begin to understand that there is no way. It is a unique way to pass through. You have to reconciliate," he says.

It's late in the day. The tigistes put down their tools. They gather by the roadside for a daily ritual.

The tigistes sing work songs they write themselves. The one today is about a bird, a beautiful bird.

The tigistes take off down the dirt road towards their sleeping quarters. They're dirty and tired. Another day's work is complete - and they're one step closer to going home.