The violence that spread from Jerusalem to cities across Israel and the Palestinian territories has both historical and contemporary roots.

In recent weeks, tension has flared over the eviction of Palestinian families in Sheikh Jarrah, east Jerusalem, Israeli authorities blocking access to the important Damascus Gate plaza during Ramadan, and a march of thousands of Israeli ultra-nationalists through the city on May 6, 2021, in celebration of “Jerusalem Day,” which marks the capture of east Jerusalem in 1967.

But the one incident that led to a significant escalation involved Israeli security forces firing rubber-coated bullets, tear gas and stun grenades at worshipers gathered at Al-Aqsa Mosque on May 7.

After Taraweeh last night and into the wee hours of this morning, Masjid al-Aqsa was transformed into exactly the same theatre for Israeli attacks as yesterday morning. pic.twitter.com/yv455UeQvI

As a scholar of global Islam, I teach introduction to Islam and include a discussion about Al-Aqsa as part of the syllabus. That’s because Al-Aqsa has deep religious significance for Muslims around the world. But, it is also important to highlight its remarkable political relevance for Palestinians. These two facts make it a focal point for conflict.

The night journey of Muhammad

The Masjid al-Aqsa, or simply Al-Aqsa, means “the farthest mosque” or “the farthest sanctuary,” and refers to the lead-domed mosque within the sacred precinct of Haram al-Sharif — “the Noble Enclosure.” The precinct includes the Dome of the Rock, the four minarets, the compound’s historic gates and the mosque itself.

Mentioned in Sura 17, verse 1 of the Quran, the mosque is linked to the story of Muhammad’s “Isra” — the “night journey” from Mecca to Jerusalem — that in part confirms him as the last and most authoritative of the prophets for Muslims. The Quran says the prophet was “carried ... by night from the Sacred Mosque [in Mecca] to the Farthest Mosque [Al-Aqsa], whose precincts we have blessed.”

From there, it is believed that Muhammad ascended to heaven — called the Mir'aj. The Dome of the Rock — Qubbat as-Sakhra — is said to shelter the rock from where Muhammad physically ascended.

The mosque’s origins stretch back to the seventh century. It was first built in A.D. 637, just five years after the prophet’s death. It has been destroyed, rebuilt and renovated multiple times.

The current building largely dates to the 11th century and hosts daily prayers and Friday gatherings that draw large crowds. It lies adjacent to important Jewish and Christian religious locales, particularly the site of the First and Second Jewish Temples.

At times, the Dome of the Rock — a shrine — and Al-Aqsa — a mosque — have been confused as one and the same. While part of the same “Noble Sanctuary,” they are two distinct buildings with different histories and purposes.

However, the term Al-Aqsa is sometimes used to indicate the entire “Noble Sanctuary” complex. Originally, it is believed that the term “the farthest sanctuary” referred to Jerusalem as a whole.

After Mecca and Medina, the vast majority of Muslims worldwide consider Jerusalem the third holiest place on Earth.

Referenced frequently in Islamic tradition and hadith — records of something the Prophet Muhammad said, did or tacitly approved of — it is believed that while in Mecca, Muhammad originally oriented his community’s prayers toward Al-Aqsa.

In A.D. 622, the community fled Mecca because of persecution, seeking refuge in Medina to the north. After a little over a year there, Muslims believe God instructed Muhammad to face back toward Mecca for prayers. In Surah 2, verses 149-150, the Quran says, “turn thy face toward the Sacred Mosque [the Kaaba in Mecca] ... wheresoever you may be, turn your faces toward it.”

Nonetheless, Jerusalem and its sacred locales — specifically Al-Aqsa and the Dome of the Rock — have remained sites of Islamic pilgrimage for 15 centuries.

The ‘most sensitive site’ in conflict

Given its sacred significance, there was great concern about the precinct’s fate after Israel’s victory in the 1967 Arab-Israeli War and its subsequent annexation of East Jerusalem.

Although Israel granted jurisdiction of the mosque and complex to an Islamic waqf — “endowment” — Israel still commands access to the grounds and security forces regularly perform patrols and conduct searches within the precinct. Under the Preservation of the Holy Places Law, the Israeli government has also allowed entry to different religious groups – such as Christian pilgrims.

Many Israelis respect the sanctity of the place as the holiest site in Judaism. In 2005, the chief rabbinate of Israel said it is forbidden for Jews to walk on the site to avoid accidentally entering the Holy of Holies - the inner sanctum of the Temple, where God promises his full presence. Nonetheless, certain ultra-Orthodox Jewish groups controversially advocate for greater access and control of the site, seeking to reclaim the historic Temple Mount,  and rebuild the Temple.

Described as “the most sensitive site in the Israel-Palestinian conflict,” it has frequently been host to political acts.

For example, in August 1969, an Australian Christian named Dennis Michael Rohan attempted to burn down Al-Aqsa, destroying the historically significant and intricately carved minbar — or “pulpit” — of Saladin, a treasured piece of Islamic art. 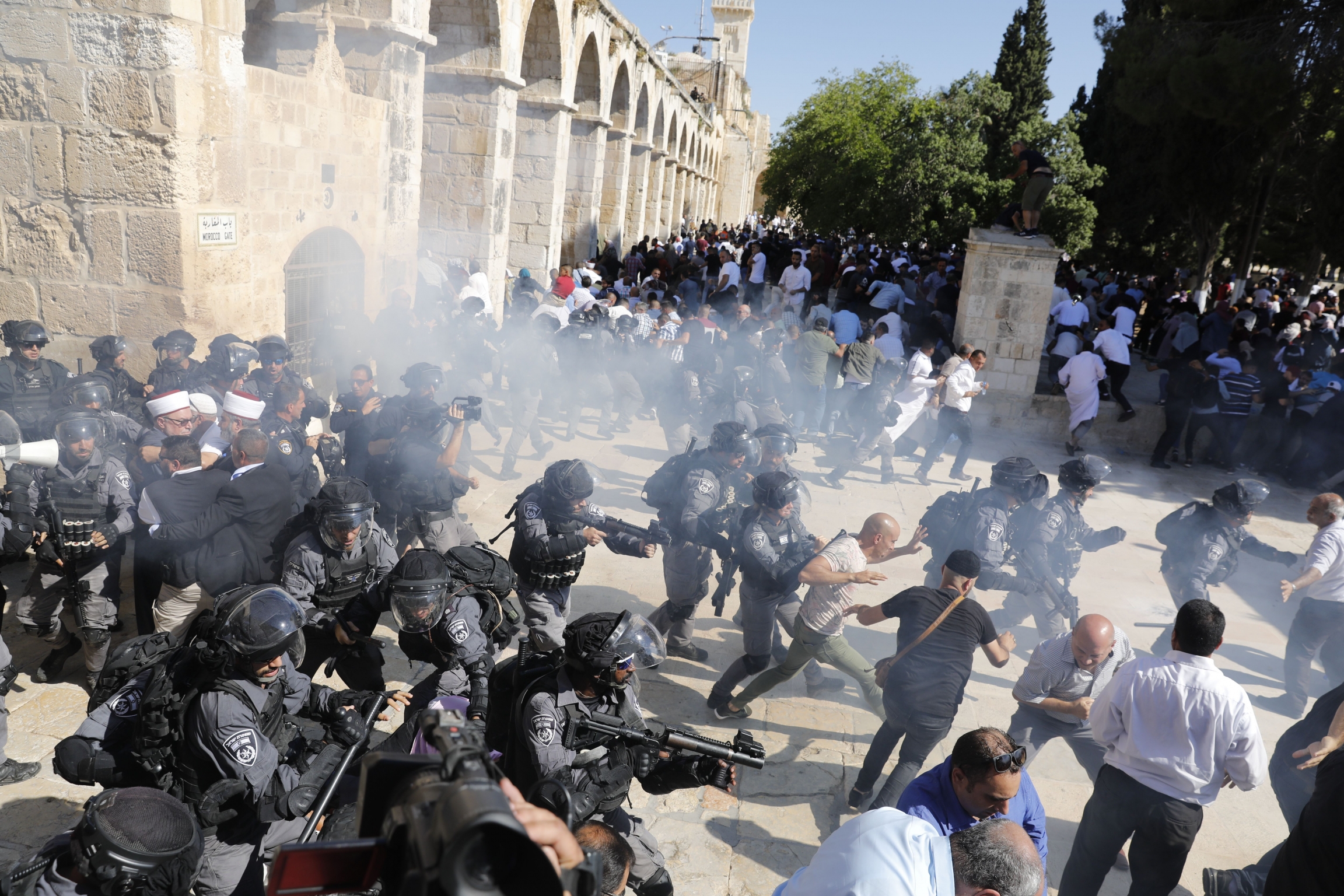 Israeli security forces fire sound grenades inside the Al-Aqsa Mosque compound in the Old City of Jerusalem on Aug. 11, 2019.

On Sept. 28, 2000, Israeli opposition leader Ariel Sharon and a delegation guarded by hundreds of Israeli riot police entered the precinct. This sparked protests and a violent crackdown by Israeli authorities, with multiple casualties. Many Muslims worldwide considered this a “desecration” of the sacred mosque, and the event helped ignite the Second Intifada, or Palestinian uprising.

Tensions peaked again after an attack on Yehuda Glick, a controversial right-wing rabbi, in autumn 2014. In response, Israeli authorities closed down access to Al-Aqsa for the first time since 1967. In March and April of that year, Israeli police used tear gas and stun grenades on Palestinians inside Al-Aqsa, prompting international outcry.

Numerous other incidents between Israeli forces and worshipers have occurred at Al-Aqsa in recent years.

Controlled access to the site reminds Palestinians of their relative powerlessness in their ongoing land disputes with Israeli authorities. At the same time, attacks at Al-Aqsa resonate with Muslims across the world who react with horror to what they see as the desecration of one of their most sacred sites.

Defending Al-Aqsa and fighting for rights to access it, I argue, have become proxy conflicts for both Palestinian claims and the need to defend Islam as a whole.

Ken Chitwood is a Lecturer at Concordia College New York and a Journalist-fellow, USC Center for Religion and Civic Culture. This article is republished from The Conversation, a nonprofit news service dedicated to spreading the knowledge of experts, under a Creative Commons license.