As a child, French Ivorian director Philippe Lacôte remembers traveling to the edge of the Banco forest to visit the notorious La Maca prison in the Ivorian city Abidjan.

“La Maca is a familiar place for me,” the director said from his home in Abidjan.

Back then, Lacôte’s mother was being held at the prison for political reasons, and he would travel there once a week to visit her. He remembers watching the prisoners with fascination.

Today, those earliest impressions form the basis of his second feature film, “Night of the Kings,” a French-language film that was released this year and has been short-listed for the Oscars international feature film category. 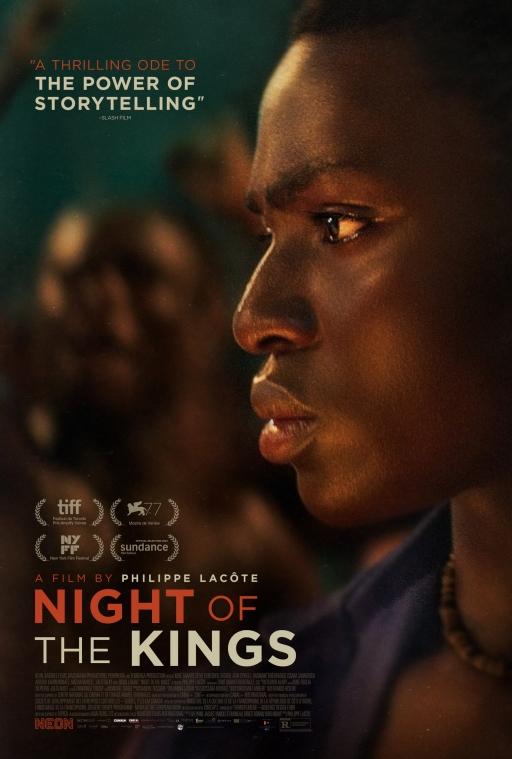 "Night of the Kings," a film by Philippe Lacôte.

The film tells the story of a young pickpocketer who, shortly after arriving at the prison, gets selected as the new “Roman” — a storyteller who must entertain his fellow inmates at night.

It’s based in part on a real tradition at La Maca.

“My goal was to observe this society of prisoners as a complete society,” Lacôte said. “A society with a government, with laws, with its beliefs.”

Roman, played by first-time actor Koné Bakary, is thrust into the middle of the prison’s rituals and politics on the night of the red moon — and soon realizes he must continue storytelling throughout the night if he hopes to survive.

Scheherazade is a legendary Persian queen who saves her own life by entertaining a king with her intriguing stories night after night in the tale of "One Thousand and One Arabian Nights."

The Scheherazade-inspired film is also molded from the West African tradition of the griot — a figure who, Lacôte said, functions both as a storyteller and historian in the Ivory Coast. This figure straddles a thin line between the real and the magical, the dead and the living.

“I wanted to pay a sort of tribute to the griot. ... The griot is very important for me, because he has to say something about mystical things, about cultural things in the Ivory Coast.”

“I wanted to pay a sort of tribute to the griot,” Lacôte said. “The griot is very important for me because he has to say something about mystical things, about cultural things in the Ivory Coast.”

Indeed, as the night passes, Roman elongates his story about the Ivorian outlaw Zama King, in a bid to survive the night.

His narration begins to leap across time and reality, weaving ancient mythical history into the Ivory Coast’s postelection violence.

The tale is accentuated by poetic singing and dancing by fellow inmates, many of whom were played by former prisoners.

“We used their experience to make it visually [more realistic], and they helped us a lot in small details,” Lacôte said.

That political message, about the universality of storytelling, is perhaps one of the reasons why “Night of the Kings” is gaining attention in the United States, where it was recently released in select virtual theaters and on select streaming platforms.

Related: Academy: Nigeria's first-ever Oscar submission has too much English

For Lacôte, US interest in his French-language film is both a pleasant surprise — and a long time coming.

“It’s time for African cinema to be a real part of international cinema. We want to share our stories,” he said, noting that “Night of the Kings” is one of two films by African directors that have been short-listed.

The second is “The Man Who Sold His Skin,” by Tunisian director Kaouther Ben Hania.

The final nominees for the Oscars will be announced on March 15.