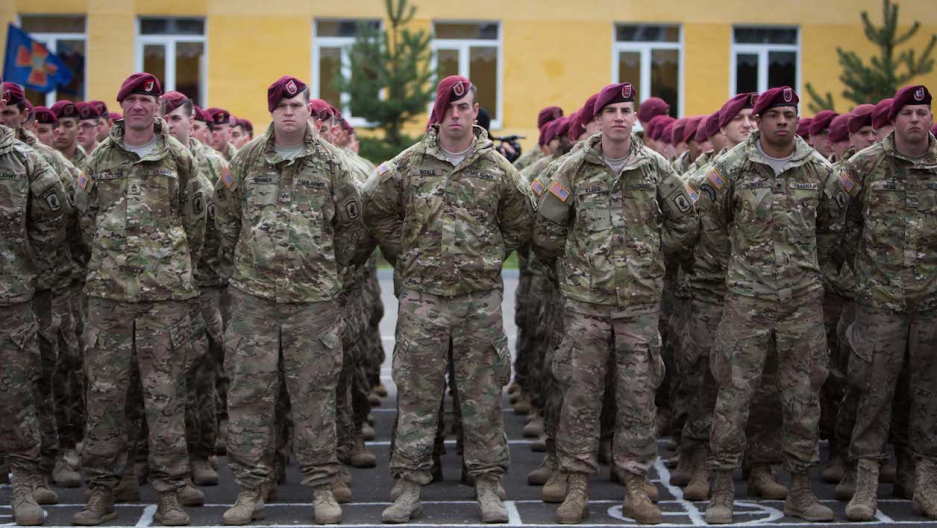 About 300 US Army soldiers began training Ukrainian troops on Monday at a western Ukrainian base in Yavoriv.
Credit: Dan Peleschuk
Share

Ukrainian officials asked Washington for lethal weapons to help fight Moscow-backed separatists. What they’ve just received, you might say, is the next-best thing: about 300 soldiers from the United States Army’s 173rd Airborne Brigade to train Kyiv’s troops in the ways of war.

This week, the American soldiers are kicking off a six-month training program at a military base here in western Ukraine — about 800 miles from the rebel insurgency out east — to boost the fighting capability of Ukraine’s National Guard.

“I think as we progress and move through this training, we’ll learn a lot from each other,” Capt. Matthew Carpenter, who commands around 70 troops in the brigade, said at the opening ceremony on Monday. “And we’re really excited.”

Moscow has long complained that Washington is propping up a pro-Western government in Ukraine that launched the war in the east, where more than 6,000 people have been killed since last year.

It also believes Ukraine’s campaign against the rebels is actually part of a broader Western plot aimed at undermining Russia. That’s despite Western allegations that Moscow is fueling the pro-Russian insurgency through weapons and even military support.

Last Friday, Vladimir Putin’s spokesman was quick to respond to the arrival of US troops in Ukraine, saying it “could destabilize the situation.” A fragile truce in eastern Ukraine reached in February has been marked by regular small-scale violations.

But the Americans here say they’re staying out of politics and focusing on training their Ukrainian counterparts. The program will involve about 900 members of Ukraine’s National Guard, many of whom have already seen action in the east, and will include both individual and group instruction on everything from medical support to weapons use.

So far, the Ukrainian troops say they’ve been impressed by the American discipline they're perceiving.

“If a soldier is walking along and sees a sergeant, the reaction is really something you have to see,” said Vadym Perepichka, a senior lieutenant in the elite Jaguar regiment that’s fought on the front lines in eastern Ukraine. “It’s as if he’s seen God himself.”

When the war with Russian-backed militants broke out last spring, Ukraine’s fighting forces were poorly trained, in disarray, and marred by widespread corruption.

So Kyiv relied heavily on an array of volunteers to fight alongside the regular army. Some of the volunteer units, many of which are now part of the National Guard or the Interior Ministry, were criticized for their far-right ideology, private funding, or even reported rights abuses in government-held territory.

But speaking to reporters Monday, Ukrainian President Petro Poroshenko said most of the country’s “so-called volunteer battalions” have been successfully integrated into official structures. He was also eager to cast the National Guard as a professional fighting force.

On the surface, training only 900 Ukrainian troops may seem insignificant, especially since tens of thousands of soldiers have been involved in the government’s proclaimed “anti-terror operation” in eastern Ukraine.

But analysts here say the training could produce a trickle-down effect, in which the Ukrainian troops would pass on lessons learned from the Americans to their comrades-in-arms.

And according to Oleksiy Melnyk, a defense analyst at the Razumkov Center think tank in Kyiv, the US mission also sends a strong political message to the Kremlin.

“The noise raised by the Russian side about how this destabilizes the situation is a sign of how crucial [the US presence] is,” he said. “In reality, this is a stabilizing factor.”