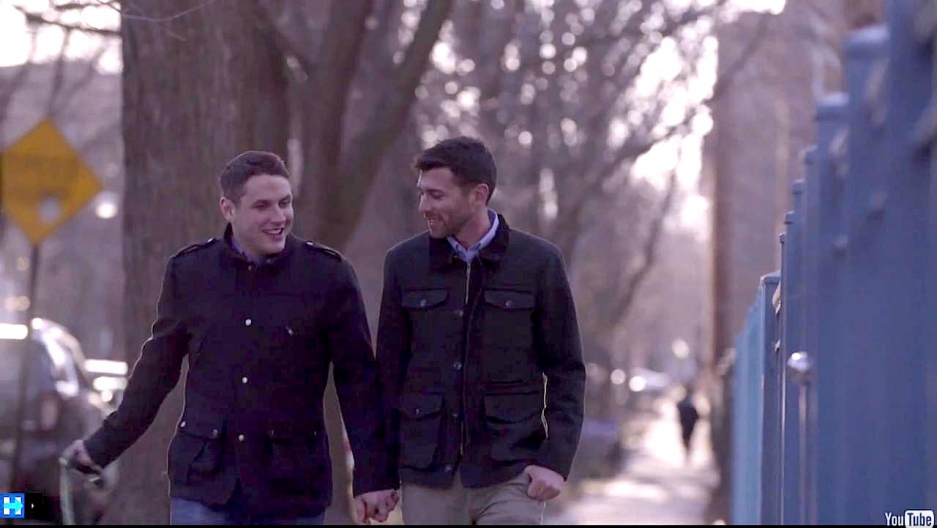 KYIV, Ukraine — Hillary Clinton has been a pet peeve of sorts for Russian President Vladimir Putin. So have gay rights activists.

And a couple of men talking about marrying each other in Clinton’s 2016 campaign launch video? That may have just crossed the line.

It also might have broken Russian law if a local television station wasn’t careful about how they broadcast the clip.

TV Rain, an opposition-minded station and Russia’s only remaining independent network, put an 18-and-over rating on the video. Its spokesman told ABC News on Monday that the age warning was meant to avoid prosecution under the country’s ban on homosexual “propaganda” among minors.

Clinton launched her much-awaited presidential campaign with the following “Getting Started” video that’s big on diversity. One scene features two young men holding hands and discussing their plans to get married this summer.

(One of the grooms-to-be later tweeted that Clinton is invited to the wedding.)

Responding to sharp criticism from the former secretary of state, Putin once said Clinton “has never been too graceful in her statements.”

Many of Putin’s conservative countrymen might agree, at least when it comes to her latest video message. Russia’s anti-gay attitudes are rising: 63 percent of the population says homosexuality should not be accepted in society, according to a new Associated Press poll. Videos by gay-bashing groups have even gone viral online, part of a violent trend Human Rights Watch says is “deliberately ignored” by Russian authorities.

The vaguely worded gay propaganda prohibition, which Putin signed into law in 2013, punishes people with fines for “promoting nontraditional sexual relations” to minors. Russian and international rights activists have decried the law, saying that instead of protecting Russia’s youth, it sends a message of intolerance to the masses.

Some critics even called on athletes and the international community to boycott the 2014 Winter Olympics in Sochi over the ban. And there's a growing playlist of protest songs over the issue.

For the couple featured in Clinton’s video — lawyer Jared Milrad and health care consultant Nathan Johnson — the 18+ rating is a bitter reminder that Russia is still far from the openness the two advocate.

“It’s past time to end this idea that being gay is a choice,” Milrad told GlobalPost Monday, “or that somehow we are spreading propaganda by simply standing up for what we believe in, or walking down the street holding hands.”

Telecommunications companies are required to comply when releasing material that might fall under the legislation.

TV Rain told ABC News it wasn’t pressured by the authorities, but instead decided on its own to use the 18+ rating.

It’s at least the second time in a week the rating has made news.

Last Thursday, controversial Russian lawmaker Vitaly Milonov, who sponsored the original version of the federal law in his native St. Petersburg, proposed applying the rating to Apple’s new operating system because it includes a new set of gay emoticons reportedly released as part of the upgrade.

He told local news site Fontaka.ru the company should develop a special Russian patch that would exclude the emoticons. If not, Milonov said, the new iOS should be marketed as 18+ and “sold only in specialized stores together with whips and gags.”

“Otherwise, any minor who uses an iPhone could become the subject of a major action action Apple under Russian law,” he said.