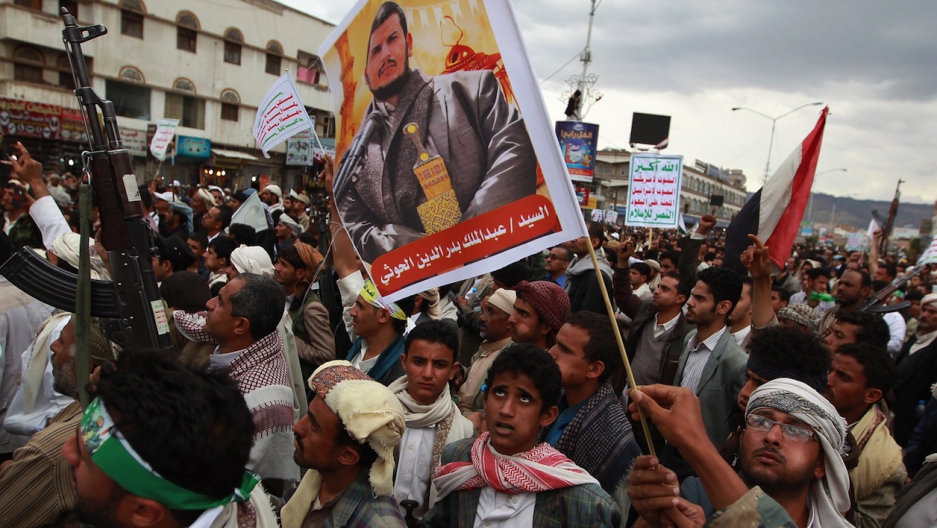 Yemeni supporters of the Shiite Huthi militia hold a portrait of the movement's leader on March 26, 2015, during a gathering in Sanaa. Warplanes from a Saudi-led Arab coalition bombed Huthi rebels in support of Yemen's embattled president, as regional rival Iran warned the intervention was a 'dangerous' move.
Credit: MOHAMMED HUWAIS
Share

DUBAI, United Arab Emirates — In the early hours of Thursday morning, the news emanating from social media in Yemen was even more confusing than normal. Residents of Sanaa, the capital, were pouring onto Facebook and Twitter to ask the same question: What the hell is going on?

One resident said that Saudi Arabian jets were flying over the Yemeni capital, Sanaa, and dropping bombs on the international airport — which is also the home of the country’s main air force base. Thus Saudi jets were also bombing key military installations in and around Sanaa and other cities occupied by a militia known as the Houthis.

Shortly after, the US government issued a statement of its own, saying that it was helping underpin the nascent campaign with intelligence and logistical support. The Saudis later said that they couldn’t rule out a ground campaign, and that they had a 150,000-man force ready to go to war.

In hindsight, the chaotic mess that Yemen finds itself in, and Saudi Arabia’s newfound aggression, should not be surprising. The country has been stumbling toward a civil war between two broad coalitions backed by the regional superpowers, Iran and Saudi Arabia, for months now.

The rise of the Houthis

Last year, the Houthis started winning back-to-back victories against conservative Sunni tribes and military units they had been fighting in the country’s mountainous northern highlands for a decade.

The group also lambasted Yemen’s transitional president, the US- and Saudi-backed Abed Rabbo Mansour Hadi, for failing to implement a series of democratic reforms agreed upon at multi-party peace talks earlier in the year, attacking him for a fuel price hike that had brought the country back from the brink of bankruptcy. They captured the zeitgeist: Yemenis were fed up with a political transition initiated in 2011 that had brought economic malaise, declining security and endless promises of a bright new future that many felt the country’s political leadership had no intention of making happen.

Saudi Arabia, increasingly paranoid about Iran’s growing profile in the region — and seeing the Houthis as an Iranian proxy — started pressuring President Hadi to take a more aggressive role in bringing the Houthis down to size.

Yet when Houthi fighters arrived in Sanaa in September of 2014, it was the tribal militias and military units allied with the Sunni Islamist Islah party that mounted the defense of the capital. Hadi was reluctant to send his own loyalists into the fight until it was too late. On Sept. 21, he signed a peace deal with the Houthis that handed them an unprecedented level of political power in exchange for a promise to withdraw their men from Sanaa. The country’s political elite gathered in the presidential palace to endorse the deal. Most of the men in the room were shellshocked.

The problem with underdog militias is that when they finally gain the upper hand, they rarely see the point in making concessions. The Houthis stayed put in Sanaa and started spreading east and west while doing their best to cement their control over the government and marginalized Hadi, who became an increasingly invisible and unpopular figure. They were incensed when, in February, Hadi bolted from Sanaa after a month under house arrest and rescinded a resignation issued a month earlier.

Many Saudi Arabian policymakers were infuriated by the idea that the Houthis, whom they see as a noxious Iranian proxy in their own backyard, might actually complete their power grab.

And so Riyadh seized on Hadi as a figurehead for an anti-Houthi coalition of forces drawn from Sunni tribes, southern secessionists and the few military units still loyal to the beleaguered president, who started to bluster about sending the Houthis back to the mountains.

That kind of rhetoric must have appealed to hawks in Riyadh, who are becoming obsessed (not without reason) with the idea that Iran is increasing its regional reach. In recent months, Iranian politicians have boasted that they control the capitals of four countries in the Arab world — Baghdad, Beirut, Damascus and Sanaa. It can’t have helped that Iran quickly showed its support for the Houthis after Hadi fled, offering a year’s supply of oil and announcing twice daily flights between Tehran and Sanaa.

But it soon became clear that the Houthis, who are also backed by Yemen’s Machiavellian former president Ali Abdullah Saleh, were in a position to beat Hadi handily. They are better fighters and are vastly better equipped than Hadi’s men. Over the weekend, Houthi militias and military units loyal to Saleh closed in on Aden, seizing an important air base some 60 kilometers northwest of the southern port town. Hadi fled for a second time in as many months.

Saudi Arabia sees the attack on Houthi-controlled military installations and a new countrywide no-fly zone as a rebuke to Iran. It could well be the first salvo in a more muscular response to Iran’s growing influence in the region from Saudi Arabia’s new king, Salman. But there is a danger the Saudis, like the Houthis, will take this too far and overstretch themselves.

What has happened in Yemen started out as an internal dispute, one that was probably resolvable once the different parties involved had taken a few chunks out of each other and realized that no one could win an outright victory. If the Saudis decide to push on and try to crush the Houthis, they could push Yemen into the kind of sectarian disorder seen in Syria and Iraq.

The Houthis are experts at guerrilla warfare, while the Saudi army is a largely untested force. There are questions over the extent to which the Iranians supported the Houthis in the past, but the airstrikes on the group have made this a matter of pride. Tehran — still enjoying a newly dominant position in parts of Iraq, Syria and Lebanon — will now probably pull out the stops to assist the Houthis. The losers, as in Libya, Iraq, and Syria, will be people whose only crime was to be born in the wrong country.