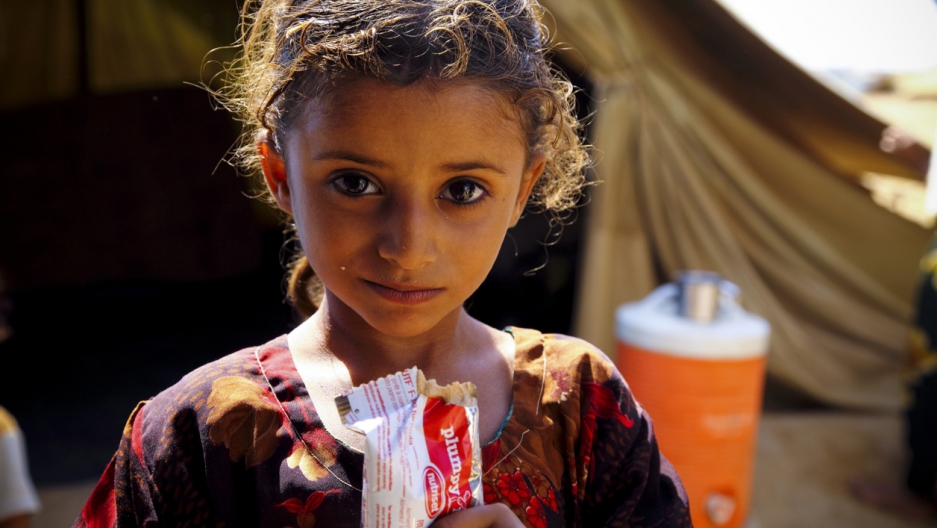 This is a 5-year-old girl in Yemen diagnosed as malnourished. She was given a pink wristband to wear to show she has not been getting enough to eat.
Credit: Hugh Macleod
Share

There are a lot of problems in Yemen.

An ineffectual government backed by foreign powers raised the ire of a rebel group known as the Houthis. The Houthis have fought their way through the capital and beyond. They are joined by Yemen's old president — who was ousted in a popular protest movement in 2011 — and his army loyalists. Ali Abdullah Saleh was also an ally of the United States and Saudi Arabia. And he also oversaw an ineffectual and corrupt government. For three decades.

But here is the part that really matters: All of this is making one of the hungriest places in the world even hungrier. It is a famine-level humanitarian crisis, without the charity concerts.

Mexican President Enrique Peña Nieto has made it his mission to take out the drug cartels. And on paper he's done an alright job. His security forces have arrested Joaquin “Chapo” Guzman, the head of the powerful Sinaloa cartel; Omar and Miguel Treviño, who head up the Zetas; and Servando “La Tuta” Gomez, who runs the Knights Templar.

That's an impressive feat that has hurt all of those cartels. But analysts worry the president has spent too much time going after the heads of these groups and not enough time attacking their infrastructure. As such, new gangs are simply moving in where the others have been forced out.

The Jalisco New Generation gang is now the fastest growing cartel in Mexico.

“It is like the proverbial hydra. When you chop off one head, another grows in its place,” a former DEA official told GlobalPost Senior Correspondent Ioan Grillo, who is based in Mexico City. “One issue is that while the Mexican government has done a good job hitting the kingpins, it also needs to go after the corrupt officials, money laundering, and the infrastructure of cartels.”

And what is especially scary about New Generation is its firepower. The cartel is actually running entire factories that churn out AR-15 assault rifles.

Uber is valued at $40 billion. And the way things are going, it's going to need every penny.

Since Uber doesn't operate as a normal taxi service and often forgoes taxi licenses for many of its drivers, legal hiccups have cropped up all over the world. Entire countries have banned the service. And numerous other cities from Mumbai to Anchorage are trying to do the same.

Legal battles are in so many different phases it can be hard to visualize the state of the company, where it is able to operate and where it isn't. So we made a map for you.