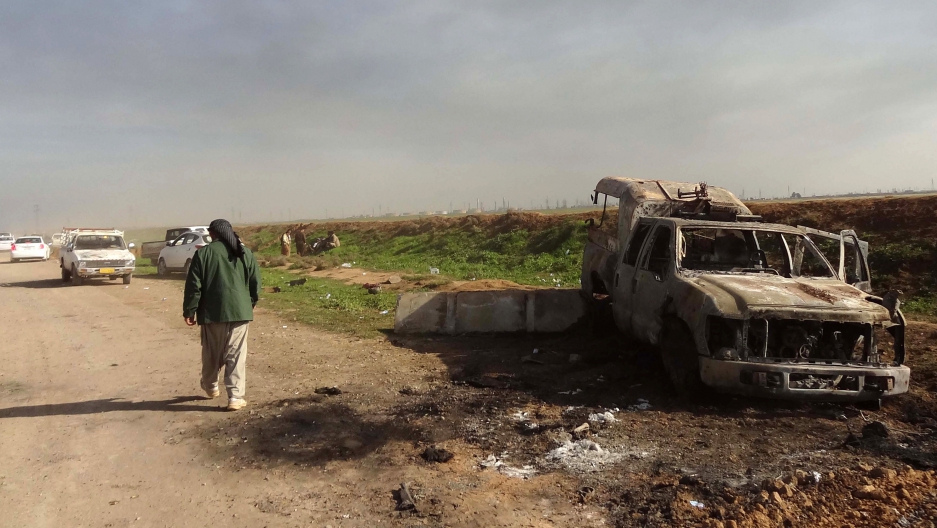 An Iraqi man walks past a the wreckage of a vehicle on February 1, 2015, near Al-Assal village, some 25 km West of the northern city of Kirkuk, a day after Iraqi Kurdish forces and police retook the area from Islamic State (IS) group.
Credit: Marwan Ibrahim
Share

KIRKUK, Iraq — In a small room within a compound of nondescript buildings southwest of Kirkuk, three Kurdish peshmerga commanders are gathered in front of a giant map that covers the wall behind them.

The map is dotted with dozens of arrows and pins. Each marks a point on the front line against the Islamic State (IS), and the brigade that controls it.

"We liberated this entire area," says one of the men, sweeping his hand across the middle of the map. "We feel now that the enemy is very weak."

Before IS stormed through northern Iraq last year, this area and Kirkuk itself were controlled by the Iraqi army. But when the marauding militants reached the edge of the city in June, most of the soldiers dropped their weapons and fled, leaving the peshmerga — the armed forces of the semi-autonomous Kurdistan region — to move in and claim a prize they have long considered their own.

Today, the peshmerga have pushed even further south of the city, taking back villages and towns from IS. They have lost some 1,500 fighters. But the pins on the map are piling up.

The people of Kirkuk have largely welcomed the peshmerga and the security they’ve brought. But the question of whether Kurdish forces should remain there permanently is more controversial. The answer could have a dramatic impact on the future of Iraq.

There is a tug-of-war going on for this city — with its massive oil wealth and a multicultural population of Kurds, Arabs, Turkmen and Assyrians, among other groups. Either it will remain part of Iraq, or become part of Kurdistan. Neither side wants to give it up.

A view of the area southwest of Kirkuk under the control of the Peshmerga. The frontline with the Islamic State lies just beyond the hill in the distance.

“The Iraqi troops left the people of Kirkuk for ISIS,” says Dr. Kemal Kirkuki, the peshmerga commander for this winding frontline and the former speaker of Kurdistan’s parliament. “They ran away.”

As far as Kirkuki sees it, Kurdish forces saved the city from IS, also known as ISIS or ISIL. That’s given Kurds sudden control of a place they have long claimed as part of Kurdistan.

“Who defended Kirkuk?” he asks, from this peshmerga base 10 kilometers away from the front line with IS. “[The Iraqi army] has no right to come back. Kirkuk is part of Kurdistan.”

The Kurdistan region’s president, Massoud Barzani, has made similar statements. In February, he declared that “today’s reality has been achieved with precious blood and we will not tolerate any change to these borders."

Dr Kemal Kirkuki at a peshmerga base southwest of Kirkuk.

For many Kurds, taking control of Kirkuk was simply the righting of a historic wrong. Kirkuki references the Paris Peace Conference of 1919, the pivotal post-World War I gathering at which Britain and France carved up the Middle East and left the Kurds without a homeland.

A sign of the importance Kurds attach to Kirkuk can be measured by its nickname: “the Jerusalem of Kurdistan.”

But there are many who are uncomfortable with the idea of the city changing hands. The last Iraqi census deemed reliable(read: non-political) took place in 1957, and found the makeup of Kirkuk to be around 50 percent Kurdish, 30 percent Arab and 20 percent Turkmen.

Later, it was the target of Saddam Hussein's "Arabization" policy of moving Arab families into areas inhabited by Kurds and other minorities to change the ethnic balance in their favor. But the Kurdish share of the population has grown larger since, as families have moved back to the areas they once lived.

A significant number of Turkmen and Arabs are opposed to the idea of joining the Kurdish region, wishing instead to remain part of Iraq. As Kurdish officials repeat that they will never hand back control of the city to the Iraqi army and central government, Sunni Arab and Turkmen politicians say the opposite, motivated by a fear of Kurdish hegemony and what it would mean for their communities.

Both Sunnis and Turkmen have played a key role in fighting IS alongside the peshmerga, and both have suffered significant casualties — something they say should give them a voice in deciding what happens in Kirkuk.

A troubling development as far as the Kurds are concerned is the buildup of Shia militias to the south of the city. According to some reports, as many as 5,000 Shia fighters under the banner of the Popular Mobilization Units (PMU) have set up camps in Kirkuk province to battle IS.

Although Kurdish forces and the Shia militias are cooperating to fight IS for now, it’s what comes next that worries some people.

Many in Kirkuk view the presence of the government-backed militias with suspicion, a potential threat to Kurdish control of the city. Shia militias have been arming and training Arabs and Turkmen from Kirkuk and their leaders have vowed to send extra forces to help defend the area, despite a warning from Barzani that their entry into the city itself would be "prohibited under any circumstances."

Down on the front lines, Kirkuki says he harbors no ill will toward the Shia militias, but insists that they are not needed to defend Kirkuk.

“I was happy for them when they liberated Tikrit,” he says. “I hope they go on to liberate other areas around Baghdad. But we are here for Kurdistan. We have shown that we can defend Kirkuk.”

A group of Iraqi fighters made up of government forces, Popular Mobilisation units and Peshmerga combatants flash the sign for victory during fighting to retake control of the city of Basheer, some 20 kilometres south of the northern city of Kirkuk, from Islamic State (IS) group jihadists on March 13, 2015.

A sea of oil

It’s not only the balance of power in the city that is at stake, but the control of Kirkuk’s massive oil fields.

How and to whom the oil from Kirkuk flows  — and there is a lot of it — has long been a point of contention between Baghdad and Erbil.  The Islamic State’s advance led to the Peshmerga taking control of two large oil fields in the province, Bai Hassan and the Avana Dome, both of which the Kurdistan government will aim to hold on to.

A messy agreement worked out in December between Erbil and Baghdad meant that Erbil handed over oil from areas under its control (including Kirkuk) in return for a share of the central government’s budget. The deal is close to unraveling, with Kurdistan’s government complaining that it has not been able to pay the salaries of peshmerga for three months because Baghdad has not held up its end of the bargain. Baghdad, in turn, says the fields have not produced the anticipated output.

“You had several overlapping disputes already, none of which were resolved. But the facts on the ground have been changed dramatically because of ISIS,” says Patrick Osgood, of the Iraq Oil Report.

With both Kurdistan and Iraq’s economies in the dumps, the fate of Kirkuk’s oil is likely to become a larger issue as time goes on.

A market in Kirkuk that was once the target of frequent bomb attacks. Now, residents say it is safer.

For most residents of Kirkuk, the biggest change since the peshmerga has been in control has been the improved security. That has led many to call for peshmerga to remain.

“Thanks to God it is safer now,” says Bakr Ramzan, a 73-year-old market vendor in the city. “There are no car bombs like before.”

The busy market where Ramzan has his stall was once the site of frequent attacks. Just 20 yards away, at the market’s entrance, a building shows the scars of the last one to hit, in January. Car bombs and suicide attacks were a frequent menace to the city before the peshmerga came to town.

Safety and security is something that comes up often in the discussion about who should control Kirkuk.

“I want to be part of Kurdistan because it is more safe,” says 33-year-old Faridon Ismail. “People are getting used to the safety now.”

'We want everyone to agree'

The Kurds insist that a referendum will be held to decide Kirkuk’s status, “just like Scotland’s,” says Kirkuki, referring to the country’s vote to remain part of Great Britain.

But the Kurds have been waiting a long time for such a vote. A clause inserted into Iraq’s 2005 constitution stipulated that a national census would be held, followed by a referendum on Kirkuk’s status — all to take place before 2007.

That date came and went, but now the Kurds find themselves in an altogether stronger position. They are pushing for a referendum sooner rather than later.

Dr. Mohammad Khorshid, a politician in Kirkuk for the Kurdistan Democratic Party — Kurdistan's second-largest party — anticipates a rocky road ahead.

“With all the divisions here, we cannot predict the future,” he says in his office compound on the edge of Kirkuk. “We must decide our future by a referendum.”

Most discount talk of conflict, citing the strength of the peshmerga in the city and the lack of appetite for a another fight. A referendum, with another messy agreement on the city’s oil, seems the most likely outcome.

It is likely that such a vote would mean Kirkuk becoming part of Kurdistan's semi-autonomous region, a result that could dramatically alter the relationship between Baghdad and Erbil at a time when Kurdish politicians are increasingly talking about breaking away from Iraq entirely and pushing for independence.

“People are tired of all this trouble,” says Khorshid. “They are looking for safety and a better life. Of course we want Kirkuk to be part of Kurdistan, but we cannot impose it by force. We want everyone to agree.”

Mustafa, Kurdistan’s foreign minister, thinks he can win the detractors over.

“Everybody in Kirkuk would be much better off being with Kurdistan than with Iraq — the Turkmen, the Arabs, the Assyrians, the Armenians,” he says.

“We have shown the rest of the world that we are for pluralism and diversity.”