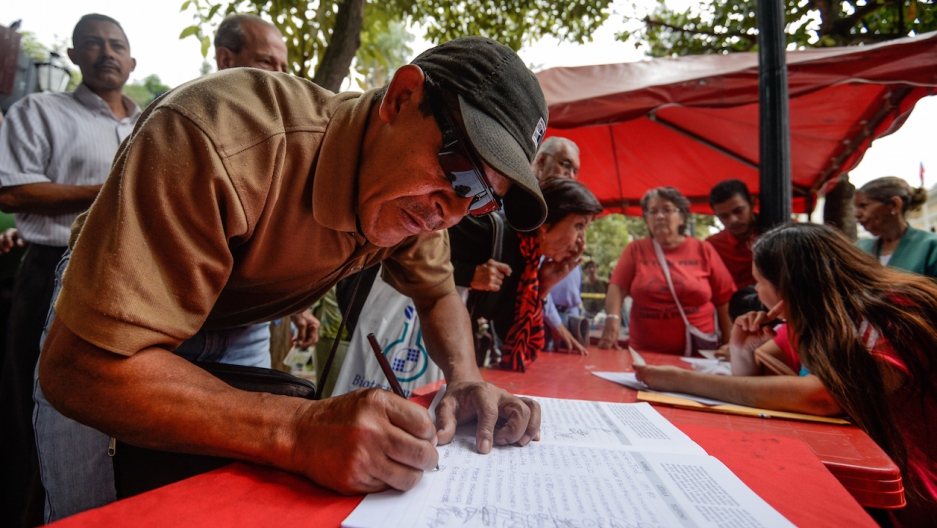 Venezuelans are lining up to sign a petition in support of their government against the US sanctions.
Credit: Federico Parra
Share

And so, President Nicolas Maduro is drumming up a petition, to be signed by Venezuelans opposed to the measure, to hand Obama in person at the Summit of the Americas in Panama on April 10 and 11.

That all sounds fair enough, until you realize Maduro has set himself the improbable target of getting 10 million signatures — equivalent to one in three Venezuelans, including kids — in less than a month.

Even for a spectacularly popular leader, that would have been a tall order. But for Maduro, with an approval rating of just 22 percent and his country staring into an economic abyss, you'd think it would be impossible.

More from GlobalPost: Why Latin American governments don’t want to fight with Caracas

How is he doing it?

Well, he began last week by ordering all Venezuelan schools to hold an “anti-imperialist day” against “US meddling” in the oil-rich but bitterly divided nation’s internal affairs.

Activities would include — you guessed it — the “collection of the signatures of the students, and teaching, administrative, maintenance and cooking personnel.”

Maduro’s next step, according to the opposition and human rights groups, was to order state workers to join in, or be sacked.

One case picked up in the local press was of a supervisor at Carbonorca, a state-owned manufacturer of electronics parts. Within hours of objecting to the collection of signatures at work, he reportedly was fired without explanation.

Venezuelan human rights group Provea claims even pregnant employees are being given the boot.

This Provea tweet reads: “In the Ministry for Supreme Happiness, they are denouncing firings of pregnant women who refused to sign against US decree.”

Yes, that’s right, Venezuela has a Ministry for Supreme Happiness.

Never mind inflation of around 70 percent, widespread shortages of food and medicines, and a homicide rate through the roof — or the fact that you can lose your job for thinking differently. If people are feeling grumpy, the way to lift the national mood is by establishing an Orwellian-sounding government agency.

And then, Maduro had one more trick up his sleeve. According to Nelson Bocaranda, the editor of RunRunes, a popular independent Venezuelan news website set up as the government took control of critical newspapers or squeezed them out of business, officials are also pressuring the military to sign the petition.

Bocaranda’s tweets read: “All the members of the components of the FANB [National Bolivarian Armed Forces] and their family members, including child minors with ID cards … SHOULD SIGN on a mandatory basis and their signatures should be handed in before April 7 to the CEO [Strategic Operational Command].”

Maduro has justified mobilizing state resources to garner the signatures by arguing that the United States is an existential threat to Venezuela. In fact, in the two years since he took up his country’s highest office, he has also claimed on nearly 20 different occasions to have thwarted coup attempts orchestrated from Washington — without ever providing meaningful evidence.

Discussing his petition this week, he said: “I believe that the threat from Obama has awoken the greatest love for what we are doing for the fatherland.”

“History books will recall him, President Obama, as the one who attempted to threaten a people and what he did was lift up their national, patriotic and Bolivarian spirit.”