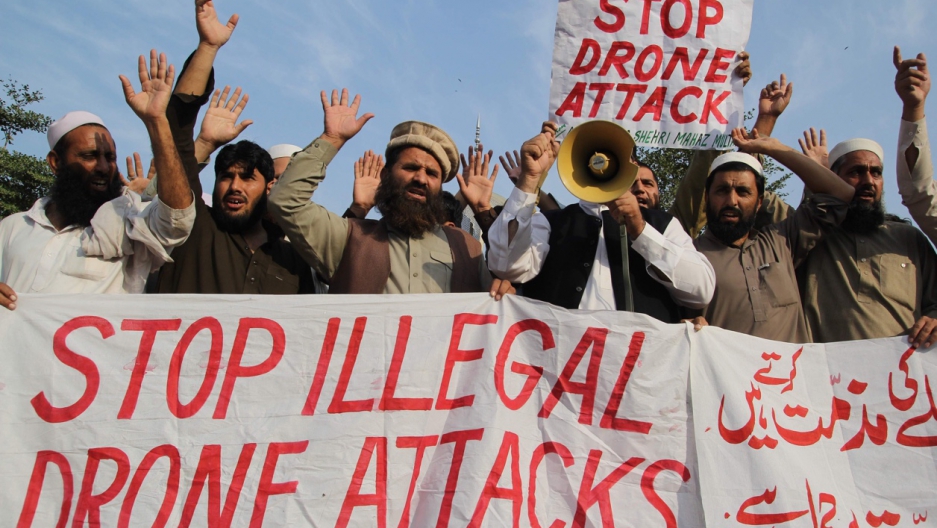 Pakistanis protest against US drone strikes in on Oct. 31, 2014.
Share

Here is what the Obama administration will admit: Three Americans and one Italian were accidentally killed during counterterrorism operations (that means drone strikes) in January in the remote regions of western Pakistan known as North and South Waziristan.

In one strike, the US government says two American Al Qaeda operatives were killed. But, it said, neither had been identified in advance and neither was deliberately targeted. The other American and the Italian were hostages, killed in a separate strike. The CIA, which carried out both attacks, did not know the hostages were there.

That's the official truth. And here's the implication: The United States doesn't really know who it's killing with its drone strikes in Pakistan. The government doesn't require the CIA to identify individuals before a strike. The agency only has to establish that the targets live a pattern of life that is consistent with terrorist activity. This is why headlines always read “suspected militants killed,” or “suspected Al Qaeda operatives killed.” The US government can't be sure. Not so incidentally, two years ago the United States said it would halt such attacks, which are known — coldly — as "signature strikes."

As a result, every single independent analysis of casualties caused by drone strikes puts the number of civilians killed far higher than the US official estimate. And every civilian killed is another propaganda tool for Al Qaeda, swelling its ranks and prolonging an undeclared and largely secret war.

One hundred years ago today began the systematic killing of up to 1.5 million Armenians living in what was modern-day Turkey. The Ottoman Empire was on the decline and worried that the Armenians were siding with its enemy, Russia. So it rounded them up and marched them to the desserts of Syria. It was a march of death.

Some argue the events of 1915 and after should be recognized as the 20th century's first genocide. But not Turkey. Turkey thinks the number of Armenians killed is exaggerated by scholars. And it thinks those that those that did die were simply caught up in the larger conflict of World War I like everyone else. It's difficult to understand what the current Turkish government gains by denying this history. But here we are.

Interestingly, there is one group in Turkey that is beginning to come around — the Kurds. The ethnic Kurdish population, which these days is at least 14 million-strong in Turkey, had a heavy hand in the killing of Armenians a century ago. But they have begun to atone. And this appears to be partly because the Kurds themselves have since been the victim of repression by the Turkish state.

Turns out Cuba has had a lung cancer vaccine for years. It was unavailable to Americans though because the US government — which until recently was apparently still fighting its war on Communism — refused to allow any kind of relationship with Cuba.

It may come as a surprise to some but the Castro regime has long invested in medical research. “[Cuba] is famous for putting its extensive health system to work as a kind of global doctor diplomacy arm,” writes GlobalPost Senior Correspondent Ioan Grillo, who is based in the region.

Since Obama began normalizing ties, the two countries have been able to share medical research. A delegation from New York just returned from Havana and will now begin trials to test the vaccine. It is called CimaVax and has proven successful in past trials preventing the return of lung cancer after patients go through chemotherapy.