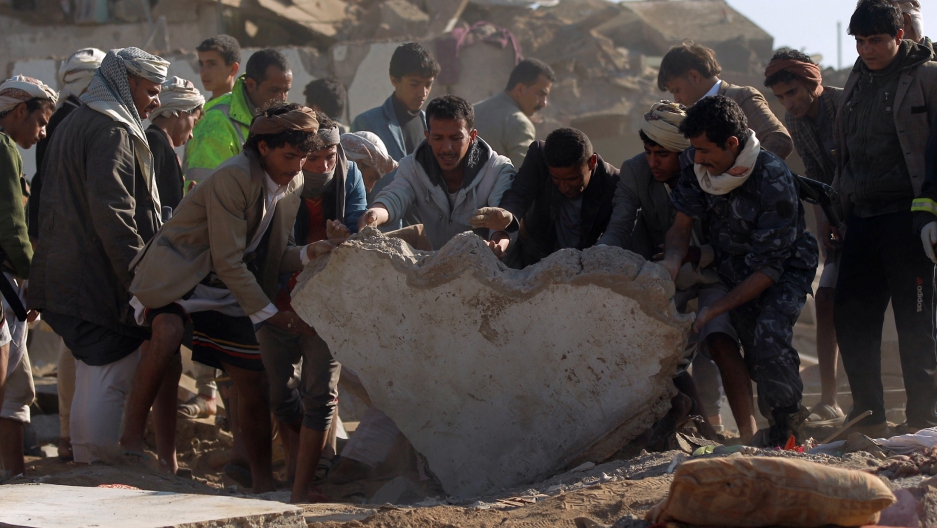 Yemenis search for survivors in the rubble of buildings destroyed during Saudi air strikes against Houthi rebels, near Sanaa Airport, on March 26, 2015.
Credit: Mohammed Huwais
Share

Somaya Alkorshwmi has spent two straight nights in her basement, sheltering from the barrage of Saudi-led airstrikes that began targeting rebels in Yemen on Thursday.

Her family and neighbors joined her in her house in the capital Sanaa, as missiles rained down on the barracks nearby.

“Today the bombing started earlier and we were not as shocked and scared as yesterday, we were prepared today,” Alkorshwmi told GlobalPost by phone on Thursday evening. She added that she was nonetheless "terrified."

Sanaa residents were awoken when the bombing first started in the early hours Thursday. The deafening booms were followed by an announcement from the Saudi Arabian ambassador in Washington that his country was leading a coalition of Arab states in an attack on Houthi rebels, who have advanced across the country and were closing in on Yemeni President Abd-Rabbo Mansour Hadi, who had fled from the capital to the port city of Aden last month.

“I went to sleep at 1:30 a.m. and woke up an hour and a half later to the sound of the bombing,” said Osamah, a Sanaa resident who did not want his full name to be used. “The sounds could be heard across the city. The anti-aircraft guns went out all across Sanaa.”

Like many in the city, Osamah woke up worried about family and friends. A few people braved going out on to the streets to bring back news that everyone he knew was safe.

“The situation in the day time was normal, people were getting along with their lives,” Osamah said.

But not everyone escaped unhurt. The unprecedented foreign strikes on Yemen's capital, as well as other targets throughout the country, left 25 people dead as of Thursday evening, according to Yemen's Houthi-controlled Ministry of Health. Amnesty International said that toll included six children.

Many residents of Sanaa now fear of being caught in what they said appeared to be “random” bombings.

“We're scared,” said Muhammed Abbas, a contractor. “We've experienced shells and they can cause damage, but missiles are different — a missile can destroy a whole neighborhood.”

The Arab coalition carrying out the bombing campaign hopes to be able to drive back Houthi fighters from Aden and weaken them in Sanaa, potentially paving the way for an extended ground campaign to rout them entirely. But it is possible that the campaign could backfire, refocusing civilian anger toward Saudi Arabia and away from the Yemeni government or the Houthi rebels.

“People don't see this as targeting the Houthis, it is targeting Yemeni dignity,” Abbas said.

He also touched on a general anti-Saudi sentiment that is prevalent in Yemen. Many Yemenis have long felt that Saudi Arabia, Yemen's large and powerful neighbor, too often intervenes in the poverty-stricken country for selfish reasons.

“The hatred most people have for Saudi Arabia makes people not care who's in charge, everyone is opposed to Saudi,” Abbas said.

Hussain al-Bukhaiti, a pro-Houthi activist, said that this “hatred” for Saudi Arabia was the one thing that united Yemenis.

“I went around the city, everyone is angry. People who were against the Houthis are against the attacks,” al-Bukhaiti said, reflecting a sentiment that was expressed by anti-Houthi residents of Sanaa, like Osamah and Alkorshwmi.

Al-Bukhaiti said he hoped the Saudis would send in ground troops “because they will suffer heavy losses.”

'I bought qat and went home'

Not everyone in Sanaa is against the airstrikes, however.

“It had to be done, someone had to deal with the Houthis and teach them a lesson,” said Amro Salman, a businessman.

“They tried negotiations and peaceful means, but they just carried on advancing.”

Salman, who said he is considering traveling to his home city of Taiz in central Yemen, spoke as bombs pounded Sanaa. He said he was enjoying an evening with his friends chewing qat, a mild narcotic popular with Yemenis.

“I went to a shopping mall for work but no one was there, so I left, bought qat, and went home.”

In Aden, Yemen's second city on the Arabian Sea, and the center of a secessionist movement calling for the return of the once independent South Yemeni state, residents celebrated the bombings.

Aden was on the verge of being overrun by Houthi fighters and forces loyal to former President Ali Abdullah Saleh, an advance that now appears to have been rolled back.

“People celebrated with fireworks at the decision and the strikes that hit the Houthis and Saleh's forces,” said Kafa Hashli, a journalist.

“Aden was on the verge of turning into a disaster zone as people were preparing for urban warfare, and some youth had even decided to join Al Qaeda, which has been attempting to recruit by saying that the youth had to defend their land,” she added.

Al Qaeda has attacked the Houthi Shia movement as pro-Iranian Shias, latching onto a sectarian narrative that is becoming more widespread in Yemen.

“If it had not been for this intervention the south and Aden would have been on a dangerous and chaotic path that would have benefited no one apart from Saleh, the Houthis and Al Qaeda,” Hashli said.

“I am against any foreign intervention, but the Houthis did not give us any other choice but to seek foreign support,” al-Sakkaf said.

“The south is hurting and that hurt would have increased had the Houthis taken over. We hope that these strikes don't stop until the Houthis and Saleh are taught a lesson.”