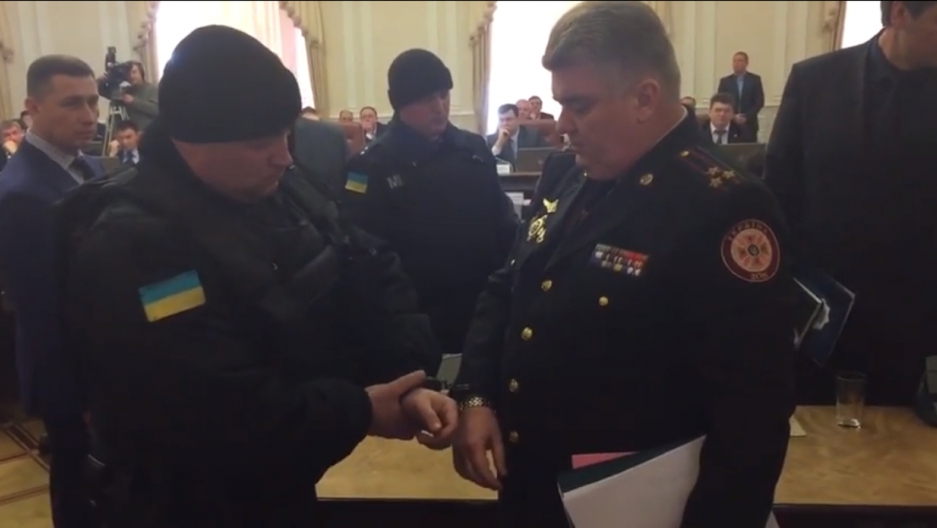 KYIV, Ukraine — There’s hardly a better way to send a message to the masses than broadcasting it live on TV.

Serhiy Bochkovsky, the head of the state emergency services, and his deputy, Vasyl Stoyetskiy, were handcuffed and hauled out of the room by police right in front of the cameras.

Investigators believe the two may have procured state supplies at inflated prices and pocketed the extra cash. Bochkovsky and Stoyetskiy have not yet publicly commented on the allegations.

Watch the video of Bochkovsky getting busted.

“When the country is at war and when we are counting every penny, they steal from people and the state,” Reuters quoted Yatseniuk as saying.  “This will happen to everyone who breaks the law and sneers at the Ukrainian state.”

The prime minister made sure to tweet photos of the arrests, too, where he repeated his warning.

Wednesday’s bust was undoubtedly aimed at proving the country’s anti-corruption fight is for real. That’s especially important since Ukraine largely depends on a cash infusion from Western lenders, who’ve made political and economic reforms here a key part of the deal.

Critics who slam Ukraine for its corruption record are praising the arrests. But they also warned that “five minutes of shame” aren’t enough to wipe out corruption once and for all.

“The public, demonstrative arrest of state officials and a public trial are elements of a systematic fight against corruption,” wrote Pavel Sheremet, a prominent Belarusian journalist covering Ukraine.

More from GlobalPost: Not everyone is afraid of Ukraine’s economic crisis

Critics have accused Kolomoisky of raiding two state-controlled companies over the past week in a show of defiance against an official effort to crack down on oligarch control over state assets.

Poroshenko fired Kolomoisky early Wednesday morning, prompting speculation that a bigger showdown between the government and the billionaire, who enjoys a considerable support base, may be underway.