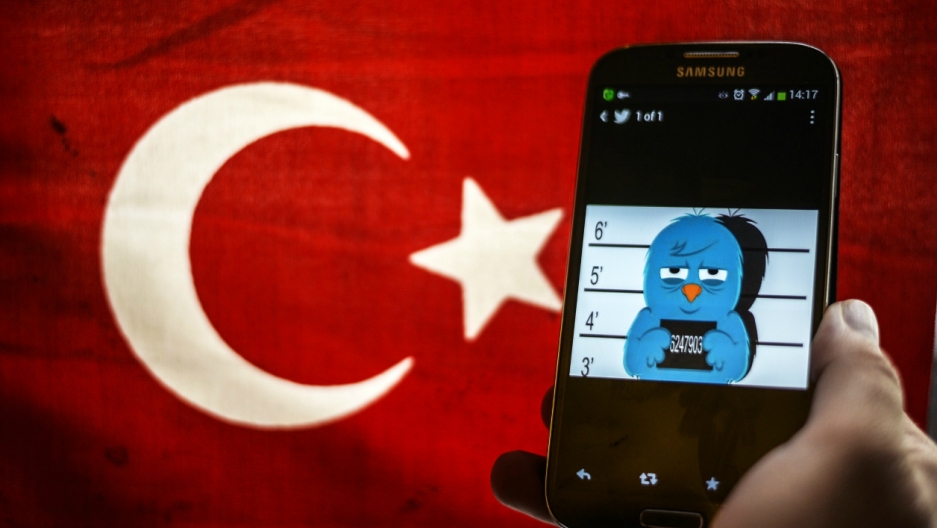 A picture representing a mugshot of the Twitter bird is seen on a smart phone with a Turkish flag on March 26, 2014 in Istanbul. A Turkish court on overturned the government's controversial Twitter ban imposed after audio recordings spread via the social media site implicated Prime Minister Recep Tayyip Erdogan in a corruption scandal.
Credit: OZAN KOSE
Share

ANKARA and ISTANBUL — Twitter has complied with Turkey's request to remove photographs of a prosecutor held at gunpoint by far-left militants, an official said on Monday, and a ban on the social network site ended hours after being imposed.

YouTube, which authorities also banned after an Istanbul court ordered social media to remove any content showing the kidnapped prosecutor, remained blocked late on Monday as talks with it continued, the official said.

Mehmet Selim Kiraz, the Istanbul prosecutor seen in the pictures, was later killed in a shoot-out between his hostage takers and police last week.

"Twitter has agreed to shut down accounts and remove images relating to last week's hostage-taking. The website will reopen to access very shortly," the senior official said before the site became accessible again.

The micro-blogging site intends to appeal the Turkish court order, an official said without giving his name.

Other social media sites were affected as well. Facebook said it had complied with a court order to restrict access to some content or face a block on its service. A company spokesman said it would appeal the order.

Late on Monday, an Istanbul court ordered Google to remove controversial content on the prosecutor killed in hostage-taking incident, otherwise access to it would be blocked also.

Ibrahim Kalin, a spokesman for President Tayyip Erdogan, said a prosecutor had demanded the bans because some media organizations had acted "as if they were spreading terrorist propaganda" in sharing the images of the hostage-taking.

"This has to do with the publishing of the prosecutor's picture. What happened in the aftermath is as grim as the incident itself," Kalin said. "The demand from the prosecutor's office is that this image not be used anywhere in electronic platforms," he told a news conference in Ankara.

Kiraz died from his wounds last Tuesday after security forces stormed the office where members of the far-left Revolutionary People's Liberation Party-Front (DHKP-C) had taken him hostage. His two captors were also killed.

The DHKP-C had published a picture of Kiraz with a gun to his head and said it would kill him unless its demands were met.

"The wife and children of prosecutor Kiraz have been deeply upset. The images are everywhere," the Turkish official said.

Google said it was working to restore service to the YouTube video-sharing site, which it owns. Turkey's telecoms regulator could not immediately be reached and there was no statement on its website.

Turkey filed over five times more content-removal requests to Twitter than any other country in the second half of 2014, data published in February by the micro-blogging site showed.