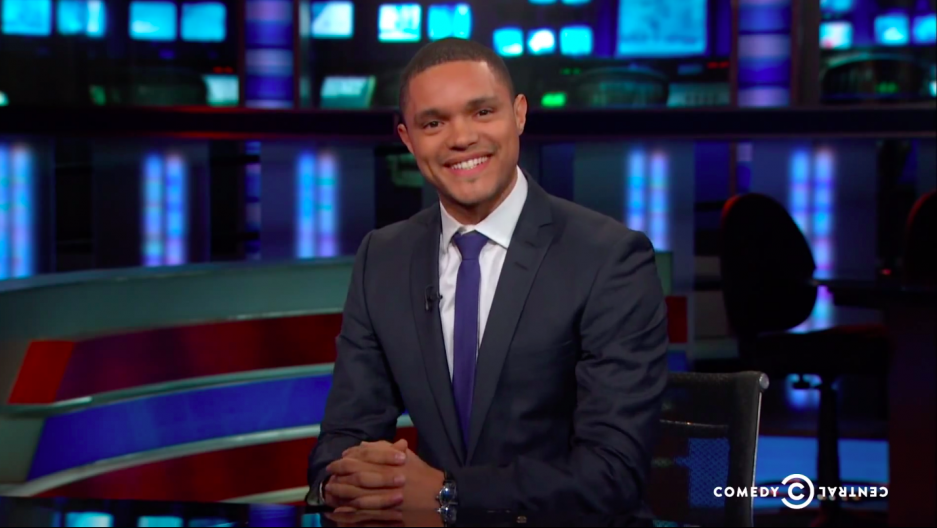 The 31-year-old standup comedian from Soweto, the black township on the outskirts of Johannesburg, has been named Jon Stewart's successor as host of "The Daily Show" on Comedy Central.

In December, Noah became a "contributor" to the satirical news program, appearing in segments on topics including African stereotypes and Boko Haram in Nigeria.

But now he is slipping into the big seat, and South Africans are cheering him on.

Very excited to welcome our next host: @Trevornoah! That's right - another guy in late night from Soweto. http://t.co/zlNhBmjg6I

No-one can replace Jon Stewart. But together with the amazing team at The Daily Show, we will continue to make this the best damn news show!

The congrats for @Trevornoah is on the scale of massive in the first degree. That's pretty massive. #DailyShowWithTrevorNoah

We'll have to drop Eskom, Cosatu, spytapes, alles. Only one news question this week: is @trevornoah now bigger than Nelson Mandela?

Could Trevor Noah be SA's third A-lister after Madiba and Charlize? I think so!

So @Trevornoah is now the most influential South African alive. @TheDailyShow

If you make it on New York Times and Time on the same day and you haven't killed anyone or died, you've made it in this life. @Trevornoah

If @Trevornoah wasn't a brilliant comedian with great delivery of prepped material, I might have accused him on cashing in on good looks!

I'm SO proud of .@Trevornoah! Wow! You have proven that THERE ARE NO LIMITS! #BlackExcellence

#ANC congratulates South African Comedian, @Trevornoah for being named as the new host of the 'The Daily Show'. pic.twitter.com/qWMouHMqRx

Cde Gwede Mantashe has wished @Trevornoah well and congratulated him on his daily show appointment. @TheDailyShow

The US ambassador to South Africa ...

OMG! This is gonna be wild! Congrats to brilliant South African @Trevornoah taking over @TheDailyShow. America, fasten your seat belts!

Oh my goodness @Trevornoah just made it to the top of satire on earth!!!! Unbelieeeeeavable!!

So apparently @trevornoah now has a real job !!! #DailyShow

I opened for @Trevornoah once. Just saying.

Just heard from my delighted grandchildren that @Trevornoah will host US TV's @TheDailyShow! Geluk my skat! Make it your Ark!

Every South African even vaguely related to comedy is currently trying to remember if they've met Trevor Noah, and how the meeting went.

And even Mandela's former assistant

But some concerns going forward

Very happy for @Trevornoah, but is he going to have to start twanging now?