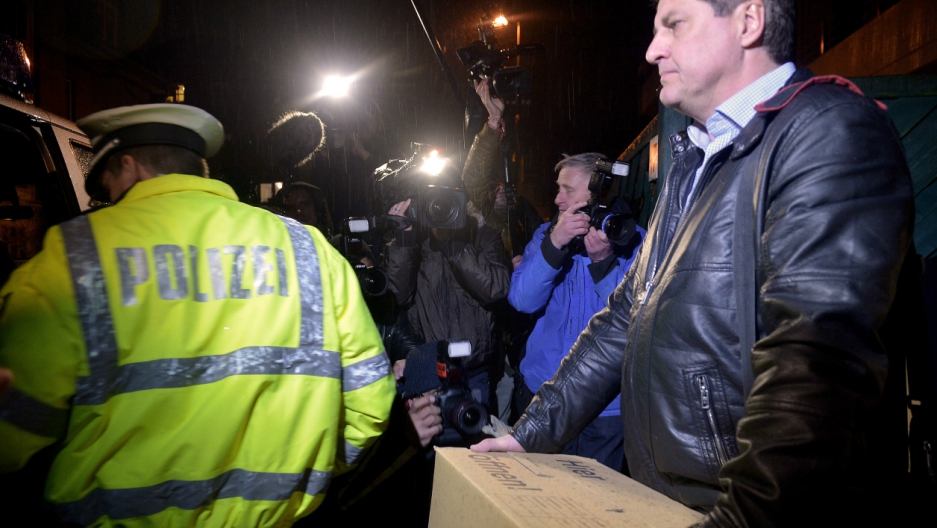 Investigators carry boxes from the apartment of Andreas Lubitz, the co-pilot on Germanwings flight 4U9525, in Duesseldorf, Germany.
Credit: Sascha Steinbach
Share

DUESSELDORF, Germany — German authorities said on Friday they had found torn-up sick notes showing that the pilot who crashed a plane into the French Alps was suffering from an illness that should have grounded him on the day of the tragedy.

French prosecutors believe Andreas Lubitz, 27, locked himself alone in the cockpit of the Germanwings Airbus A320 on Tuesday and deliberately steered it into a mountain, killing all 150 people on board.

"Documents with medical contents were confiscated that point towards an existing illness and corresponding treatment by doctors," said the prosecutors' office in Duesseldorf, where the co-pilot lived and where the doomed flight from Barcelona was heading.

The torn-up doctor's notes found in his home would have excused Lubitz from work for medical reasons for a period that included the day of the crash. That supported the view that Lubitz had "hidden his illness from his employer and his colleagues," the prosecutors said.

They found no suicide note or confession, "nor was there any evidence of a political or religious background to what happened," they added.

Germanwings said Lubitz had not submitted any sick note that would have grounded him on the day of the crash.

In France, authorities said they had recovered between 400 and 600 body parts strewn across the Alpine crash site. No bodies were found intact and DNA testing would be the best way to identify the remains, Patrick Touron, deputy head of the criminal research division of France's Gendarmerie, told reporters at the site. Investigators would look for pieces of uniform to try to identify the crew including Lubitz.

Lubitz's mental health — and what Germanwings and parent company Lufthansa knew about it — could become central questions in any future legal case over the crash. Under German law, employees are required to inform their employers immediately if they are unable to work.

A hospital in Duesseldorf said Lubitz had visited to receive a diagnosis as recently as March 10. It would not give further details because of patient confidentiality rules but said media reports he was treated there for depression were inaccurate.

Reports in German media suggested Lubitz had suffered from depression in the past and that Lufthansa would have been aware of at least some of that history.

Germany's Bild newspaper, citing internal documents forwarded by Lufthansa's Aero Medical Center to German authorities, reported that Lubitz had suffered a "serious depressive episode" around the time he suspended his pilot training in 2009. It said he subsequently spent over a year in psychiatric treatment.

Lufthansa and German prosecutors declined to comment on the report. The airline's CEO Carsten Spohr said on Thursday there was nothing in his past to suggest Lubitz was a risk, and that after he resumed his training, he passed all tests with "flying colors."

An international agreement generally limits airline liability to around $157,400 for each passenger who dies in a crash, but if families can prove an airline was negligent they can pursue compensation for greater damages in lawsuits.

Lawyers who have represented families in past airline disasters said that potential lawsuits could focus on whether Germanwings properly screened the co-pilot before and during his employment and on whether the airline had adequate safety policies controlling access to its cockpits.

Within hours after French prosecutors disclosed their theory that the crash was deliberate, several airlines changed their rules to require two crew members in the cockpit at all times, a measure already mandatory in the United States but not in Europe.

Lufthansa announced on Friday that it too would change its rules to require a second crew member in the cockpit. On Thursday, Spohr said he saw no need to do so, sparking a social media backlash.

Brussels announced it would recommend that rule change to all EU airlines. Such a recommendation can be implemented faster than changing European regulations to impose the requirement.

Robert Tansell Oliver, whose 37-year-old American son Robert Oliver Calvo was killed in the crash, said the family was not eager to sue. His son, a father of two small children, had been working for a fashion company in Barcelona.

"I don't feel anger. I'm really sorry for the parents of that young pilot. I can't imagine what they are going through right now," the father said outside a hotel near Barcelona airport where family members of victims have been staying.

"I am careful when there is a judicial inquiry, but everything points to a criminal, mad, suicidal action that we cannot comprehend," Valls told iTELE.

Lubitz was described by acquaintances in his hometown of Montabaur in western Germany as a friendly but quiet man who learned to fly gliders at a local club before advancing to commercial aviation as a co-pilot at Germanwings in 2013.

A friend who met Lubitz six years ago and flew with him in gliding school said he had become increasingly withdrawn over the past year.

Before Lubitz became a co-pilot in late 2013, the friend said the two had gone to movies and clubs together. But he noticed at two birthday parties they attended over the past year that he had retreated into a shell, speaking very little.

"Flying was his life," said the friend, who agreed to speak about Lubitz's mental state on condition of anonymity. "He always used to be a quiet companion, but in the last year that got worse."

(By Tom Käckenhoff. Additional reporting by Victoria Bryan and Michelle Martin in Berlin, Andy Callus in Paris, Marco Trujillo in Barcelona and Eric Gaillard in Seyne-les-Alpes; Writing by Noah Barkin and Peter Graff; Editing by Janet McBride and Giles Elgood)