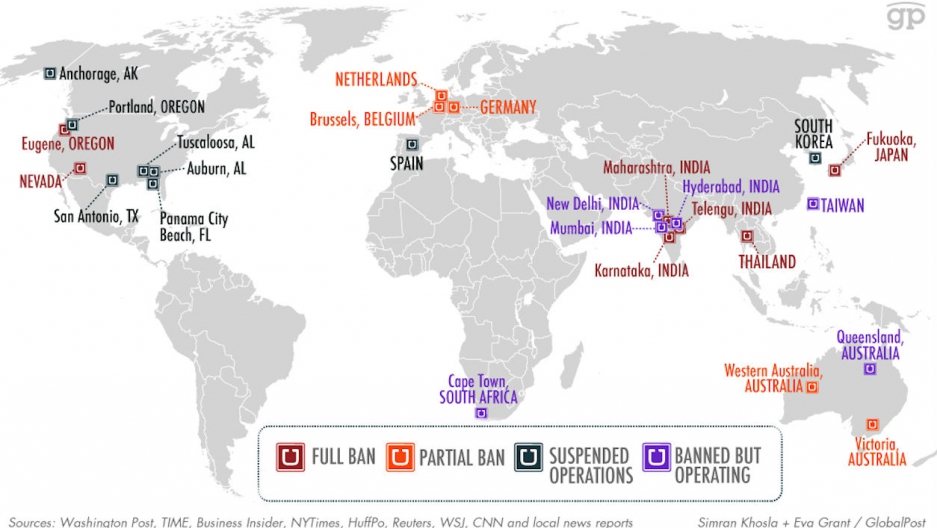 Uber is valued at more than $40 billion. Will that be enough to cover its legal fees?

On paper, the ride-sharing/taxi service is one of Silicon Valley's most successful startups, which is sort of incredible considering the string of public relations disasters it's suffered (and created) over the past year.

Uber has been plagued by sexual assault allegations. (In India, it's rolling out a depressing new feature to improve safety: an "SOS" button.) Senior executives, including CEO Travis Kalanick, said some very brand destructive things about women and journalists. And on March 23, 2015, UN Women ended a partnership with the company just a few weeks after announcing it was starting one.

And then there are the legal restrictions.

That taxi driver probably doesn't like what's on the screen.

Uber doesn’t function as a normal taxi service, instead occupying the strange business space between chauffeur service and tech company. Uber often foregoes taxi licenses for many of its drivers, causing legal hiccups when the company enters new, heavily regulated markets. Some countries and regions have completely banned the service, finding it illegal under national or state laws. Other places, like France and Germany, ban just its discount services, such as UberPOP and UberX.

As you can probably guess, Uber's legal status varies country-by-country — a lot —and so does its response to legal challenges.

Some nations and cities, like South Korea, have chosen to delay their decisions on Uber, asking the service to suspend operations until they can pass Uber-specific legislation and regulations. In some cases, Uber has independently chosen to suspended operations in response to growing pressure from local communities and municipalities (like in Panama City Beach, Florida). In other places, it's continued to operate in the face of that pressure. (In Cape Town, South Africa, for example, traffic police impounded 34 Uber vehicles for operating illegally.) Other times, legal loopholes have allowed it to continue their operations. In Germany, where ride-sharing services are banned from operating without taxi licenses, Uber plans to purchase commercial licenses for its drivers.

Even legal clarity doesn't guarantee a smooth ride when it comes to introducing new competition into the local taxi market. In Brussels, a cab driver intimidated and harassed multiple Uber drivers, including one incident where he threw eggs and flour at an employee. And cities around the world have held protests against the company.

The map above shows the places around the world that are trying to restrict Uber's operations. Here's a large version of the map.