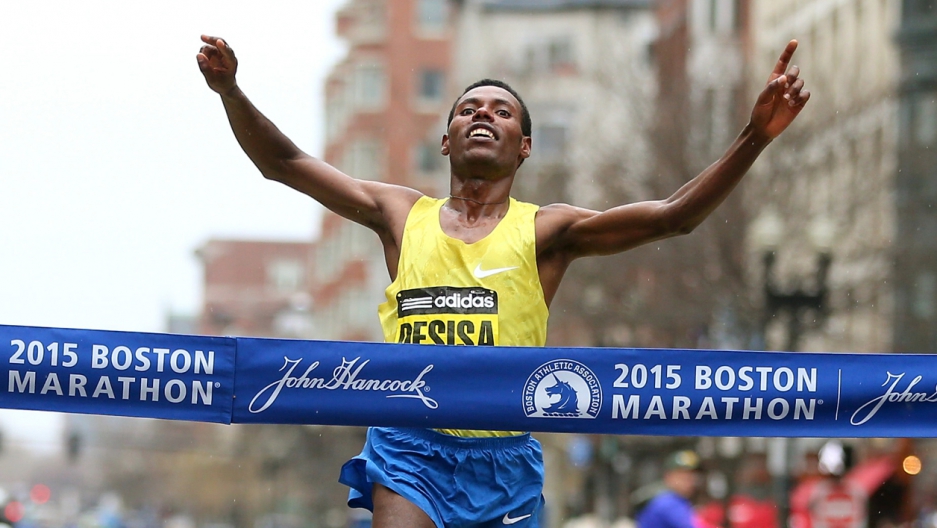 BOSTON — Another Boston Marathon is in the books and you won't be at all surprised to learn that the race was totally dominated by runners from Kenya and Ethiopia.

First prize in the men's field went to Lelisa Desisa from Ethiopia. Including Desisa, the top ten included four Kenyans, three Ethiopians, two Americans, and one Ukrainian. The top six finishers were all from Kenya or Ethopia.

For around a quarter of a century the world's greatest marathoners have all come from Kenya and Ethiopia, and over the next week, as tends to happen after major marathons, you'll probably see articles trying to make sense of results like the ones we saw today in Boston. They'll have headlines like, "What Makes Kenya's Marathon Runners The World's Best?" and "Why Kenyans Make Such Great Runners: A Story of Genes and Cultures" and "The Ethiopian town that's home to the world's greatest runners."

Those are really hard questions to answer.

So let's do something simpler. Let's look at this recent period of Kenyan and Ethiopian dominance in a longer historical context. How did other nations fare before these two countries started winning everything?

Here are the countries that have produced Boston Marathon winners since the first race in 1897.

Over the first half century of the Boston Marathon, it was a local race that grew into a national race and then into an international race. There were only between 100 and 200 entrants during this era, and US runners practically swept, as you might expect, plus strong showing from Canada.

It was after World War II that the winner's podium became seriously diverse.

Finland won four times in a row between 1959 and 1962 thanks to Eino Oksanen, who won three of them. The US had an impressive resurgence in the 1970s, thanks to four victories by Bill Rodgers. As you can see, runners from several countries on multiple continents stood on the winner's podium during a span of time you might think of as the age of parity.

That all changed in 1988, the year Ibrahim Hussein won for Kenya.

Here's where the winners have come from since.

The women's field followed a similar pattern to the men's, but in condensed fashion. Women have raced Boston since 1966, but their times were only considered official beginning in 1972.

Others join the party.