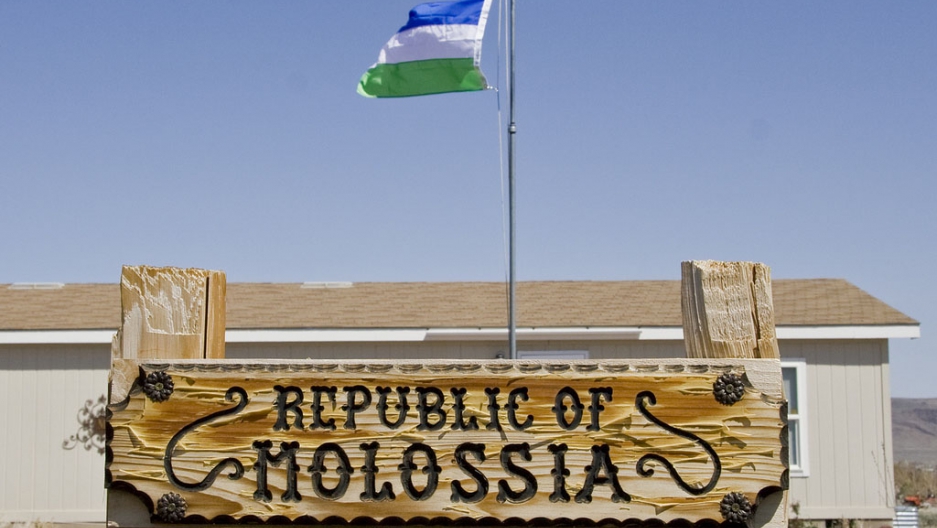 The original Republic of Molossia sign, which has since been upgraded. Photo taken on April 20, 2008.
Credit: Ryan Jerz
Share

Kings, presidents, emperors, and even supreme dictators gather together today just outside of Disneyland in Anaheim, California.

If you’re wondering why you haven’t heard of this large assembly until now it’s because the countries represented aren't technically real.

It’s a meeting of “micronations” — countries that exist almost entirely online, or are comprised of one person — called MicroCon 2015. There are approximately 400 of them out there, according to some reports.

And they have some incredible names: Who wouldn’t want to pay a visit to the “Republic of Molossia,” the “Grand Duchy of Broslavia,” or “the Provision Territories of F.A.R.T”?

So what do micronations actually look like? Depends on the theoretical nation. The Principality of Sealand, the most famous example of a micronation, located on a sea fort off the shores of the United Kingdom, invites one to become a Lord, Lady, or Baroness on its official website.

The Republic of Molossia has an official tourist season, passport stamps, and tours given by the president himself.

While it doesn’t take much to create your very own micronation, some have some interesting back stories. Molossia was first established by MicroCon’s organizer, Kevin Baugh, in 1977. It spans 1.3 acres in Nevada.

The Grand Duchy of Westarctica was established after its leader, Travis McHenry, realized that no other nation has laid claim to part of the Antarctic back in 2001.

The Grand Duchy of Broslavia is headed by Jacob Felts, whose nation of five citizens claims to have a volunteer army sporting cardboard AK-47s that fire rubber bands.

Sealand was borne out of a dispute over a British pirate radio station.

The Royal Republic of Ladonia formed after a 2011 dispute over a sculpture in Sweden.

#TIL the #micronation of Ladonia has its own timezone, LST – Ladonia Standard Time, UTC/GMT +0:57 (3 mins slower than neighboring Sweden)

This weekend’s MicroCon will be the first in North America, and the schedule looks pretty jam packed. Attendees, according to the conference’s website, “are invited to attend in full micronational regalia.”

They’ll discuss topics like “intermicronational trade,” or why micronations matter. It will be held at the stately Anaheim Central Library, complete with “‘science-fair’ sized” displays.

But don't worry, it won’t be all debate and building diplomatic ties. Participants come together for “the Cotillion,” a formal/semi formal ball.

As long as there are awkward, staged photos, it sounds just like any other diplomatic gathering.