Editor's note for queasy readers: Some of the images below might turn your stomach.

The first forkful of “laab dib,” one of upcountry Thailand’s most coveted dishes, is a sharp blast of bitterness. That’s the raw cow bile.

Then, the flavor fades into a grassy tang. That’s literally the taste of grass, partially digested, drained from a cow’s stomach and spritzed over your lunch.

Then comes the best part: a tender sweetness melting across the palate. That’s uncooked meat, minced to a pulp.

It leaves blood on your lips and, if you’re unlucky, a few parasites in your gut. But for diehard fans of “laab dib” — an intimidating mix of raw meat, blood, bile and spices — this meal is to die for. Sometimes literally.

All that rawness may sound menacing. But if you’re ever ordered Thai take-out, you’ve likely had a version of laab. One of Thailand’s signature dishes, laab (pronounced “lahb”) is essentially minced meat, usually beef or pork, flecked with chili and herbs. Then it’s briefly stir-fried in a flaming wok.

That last part — the cooking — is what separates your typical Thai joint in the US from the finest meat shacks in northern Thailand.

Hilly, green and roughly the size of Kentucky, this region is the ancestral home of a special uncooked form of laab. Here, the dish is a source of local pride and a mainstay at special ceremonies. It’s served slightly chilled and punched up with a splash of raw blood and raw bile. And it exudes pure machismo.

“If it isn’t splashed with fresh blood, it just isn’t delicious,” says Wiwat Kanka, 52, owner of an open-air eatery in Phrae, Thailand. Just as Memphis is known for smoked ribs, Phrae is known for spicy raw meat.

The restaurant’s name (“Jin Sod”) translates to “Fresh Meat.” It’s a simple place, essentially a tin roof held up by logs with a kitchen off to the side. But it draws crowds seeking Wiwat’s specialty: plates of raw flesh, swimming in blood. “As you can see, mostly men come here,” he says. “All types of men love raw meat!”

In addition to bile, “I also rely on a liquid called ‘pia,’ which is light yellow, like the color of rice stalks,” Wiwat says. “It’s basically just rice stalks that a cow ate and halfway digested before slaughter.” 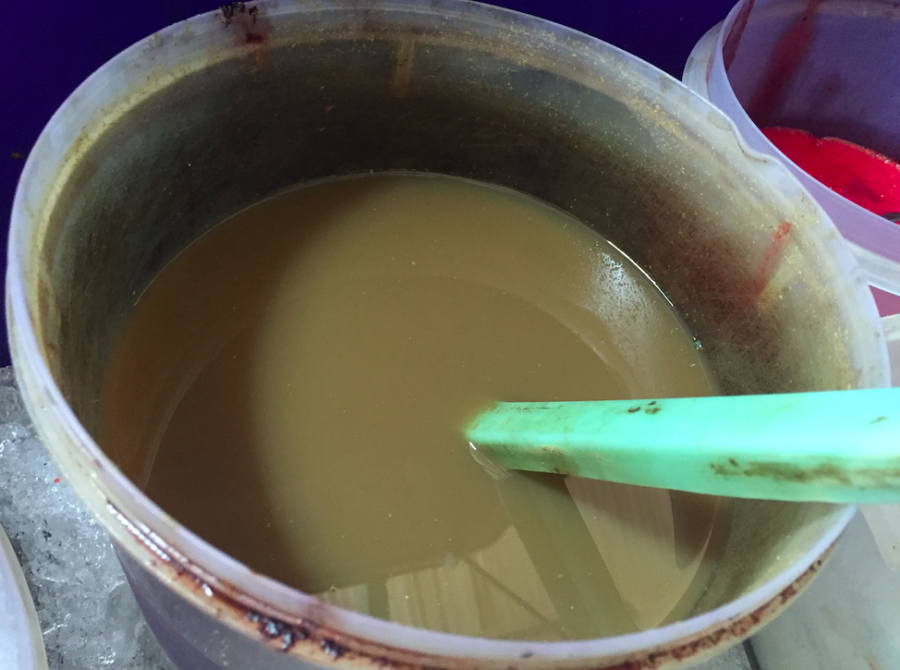 Fresh pia, in all its raw glory.

Freshness is crucial for this potentially dangerous dish. The risks from eating raw meat include contracting trichinosis, caused by an infectious worm, along with fatal bacteria or potentially rabies.

The exact number of deaths from raw meat consumption in Thailand is unknown. But research shows that incidence of “Streptococcus suis,” a fatal infection associated with raw pork, is unusually high in Thailand. Worse yet, Thailand’s incidence of bile duct cancer is 80 times that in America. Thai doctors say eating uncooked meat is to blame. The World Health Organization also says raw meat is a “major cause” of potentially deadly illnesses in Thailand and urges its population to abandon the habit.

Around the world, there is no shortage of indigenous food that will shock Western sensibilities. But northern Thai food is no longer a little-known cuisine. It has been yanked from obscurity and dropped onto a pedestal for American foodies.

The Western culinary scene’s gaze was turned to northern Thai food by Pok Pok, a 2013 cookbook written by American chef Andy Ricker, who runs restaurants in Los Angeles, Portland and Brooklyn. A cult following now surrounds the text, which exalts the meatier, herbier Thai food favored in the upcountry farmlands.

“If I had to choose my last meal before I was shot into space,” Ricker writes, “it would be this jumble of minced meat.” He is referring to laab, and he concedes that the raw version is, in fact, superior. Few northern Thai farmers would disagree.

In the US, northern Thai restaurants have sprung up from Las Vegas to Boston. But while mainstream Thai — think pad thai noodles — is nearly as passé as Chinese lo mein in a greasy white box, northern Thai is still fringe enough to be hip. Few who order cooked laab in Miami or Houston, however, realize they are swallowing a rendition of the dish that, according to many rural Thais, is inferior to its blood-soaked ideal.

“When you cook it, you lose the texture,” says Austin Bush, an American food writer who has lived in Thailand for nearly 20 years. (Bush, who specializes in northern Thai cuisine, contributed to the Pok Pok cookbook.)

“Most of the flavor is there after cooking it,” he says. “But it clumps up a bit. You don’t have that smooth, very fine texture. It’s tougher.” 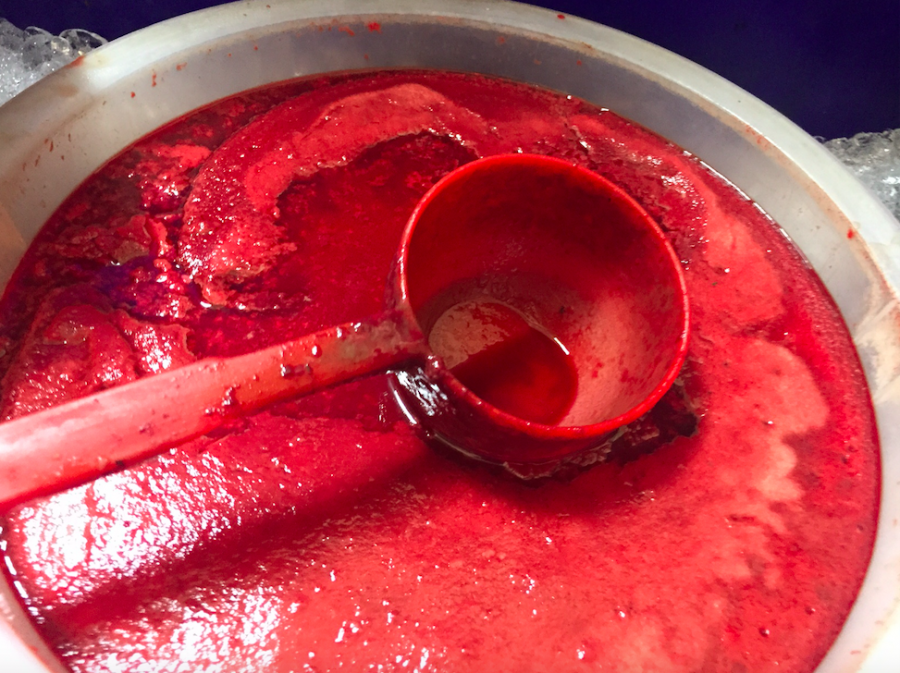 Cow blood, an essential part of the recipe.

Many Thai food fans in the US will flinch at the cow organs alone, but Americans were once far less picky. Consider the recipe for “sonofabitch stew,” a frontier-era delicacy. It calls for the brains and stomach tubing from a milk-fed calf.

Even in more recent times, souse, trotters and scrapple — made from pig faces, feet and guts — were ordinary in parts of the US. Now they are widely considered strange. Meanwhile, drinks with names like Monster Khaos Energy Juice and chicken nuggets shaped like Spongebob have become perfectly common.

Upcountry Thais have yet to fully succumb to the global processed food industry. Yes, in Thai villages, rustic meals are being replaced by processed noodles, fizzy sodas and other manufactured foods. But compared to suburban Americans, they are still much more familiar with the sounds and smells of farm life.

And with that background, a meal dripping in fresh blood is far less menacing. The fact that death makes their dinner possible is not disguised by silly packaging or meat molded to resemble cartoon dinosaurs.

Amart Wongtalueng, a regular customer at the Jin Sod eatery in Phrae, was fed raw buffalo by his parents at the age of three. That sparked a raw meat love affair that persists to this day. What remains of his lunch is a plastic plate, pooled with crimson, flecked by a few leafy herbs floating on the surface.

Many Thai men, fearing cancer and roundworm, begin to swear off raw meat sometime in middle age. But not Amart. “Just look at me,” he says. “Nearly 50 and this food has never put me in the hospital.”

“Sure, I’ve probably had parasites,” he says, grinning. “But all humans die. No matter what you eat, you can’t escape death.”