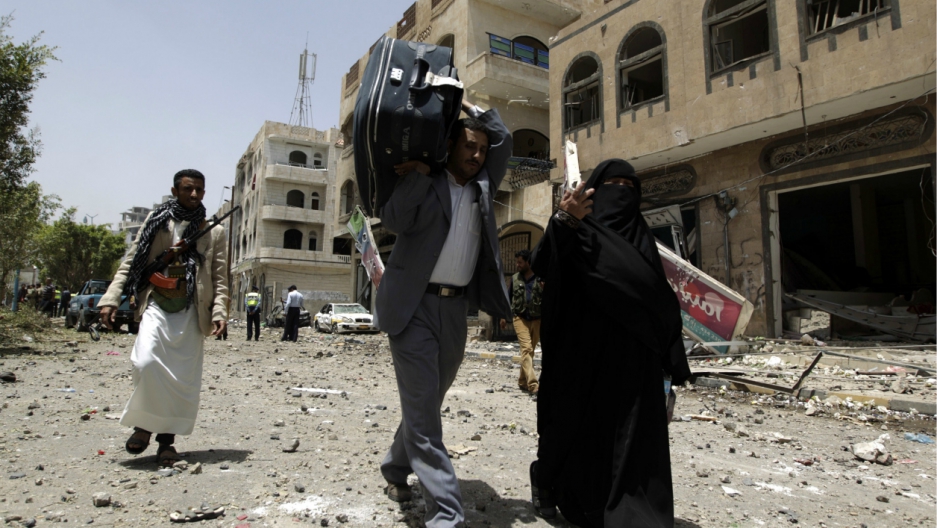 Yemenis carry their belongings after their family house was hit during a raid by Saudi-led coalition warplanes on a missile depot in southern Sanaa, on Apr. 20, 2015.
Credit: MOHAMMED HUWAIS
Share

Saudi Arabia said Tuesday that it was ending its devastating air campaign over Yemen. A few hours passed without an airstrike. Then Wednesday the Saudis struck again after Houthi rebels seized a government military base. It's unclear whether the resumption was just a last hurrah or if the bombing will continue indefinitely.

Saudi officials had earlier said that the airstrikes would stop because their coalition had achieved its objective. It was an odd thing to say because the bombings did nothing to stop the advance of Houthi rebels, and they did not hasten the return of the Saudi-backed Yemeni government. Instead, they killed hundreds of civilians, displaced thousands, and cut access to food and water for millions of already deeply suffering Yemenis.

What's more, the Saudi-led airstrikes allowed Al Qaeda to gain more territory in Yemen, and threatened to deepen sectarian divisions and spark a regional conflict involving Iraq, Iran and even the United States. And while the United States supported Saudi Arabia logistically and by providing intelligence, US officials said the Americans called for an end to the bombings because they were killing too many civilians and appeared detached from a broader military strategy, according to The New York Times.

US President Barack Obama went on television Tuesday night and said he believed a political solution could end the conflict in Yemen. “There are a lot of people inside Yemen suffering," he said. "What we need to do is bring all the parties together and find a political arrangement.”

It's hard not to wonder where this logic was when the United States and Saudi Arabia negotiated a deal at the height of the pro-democracy Arab Spring protest movement in 2011. Those negotiations did not bring "all parties together." They did not include any of the activist leaders. The deal may actually have been illegal under international law. It offered the ousted president, Ali Abdullah Saleh, immunity from heinous crimes. It also led to the installation of his vice president, Abd Rabbuh Mansur Hadi, as the new president.

The corrupt and ineffectual leadership of both Hadi and Saleh, who ruled with US support for three decades, plunged Yemen into poverty and created a climate ripe for the rise of Al Qaeda. It also generated sympathy for the Houthi rebels. Incredibly, Saleh has now essentially changed sides, fighting alongside them.

Suffice it to say, that deal the United States and Saudi Arabia struck a few years ago has had unfortunate consequences.

It's Earth Day today. Earth Day is a day set aside to celebrate environmental protection. The first Earth Day was in 1970. These days marking it is bittersweet. Since 1970, despite numerous laws and endeavors to help save the Earth, our planet is facing a kind of peril those in 1970 could not even have imagined. Calamity is calling.

Global warming, or climate change if you prefer, is in full swing. And yet its very existence is still debated in all seriousness on mainstream television news networks. Glaciers are melting, seas are rising, once unheard-of natural disasters are becoming more frequent, and species are dying out at a horror-movie pace.

Earlier this month, Guatemalan anti-mining activist Telesforo Odilio Pivaral Gonzalez was shot dead near the Escobal silver mine, which is owned by Canadian company Tahoe Resources. Belgian Emmanuel de Merode, the warden of the Virunga National Park and a real-life superhero, was shot several times in an ambush a year ago. De Merode has been waging a legal battle to stop British company SOCO International from drilling for oil in Africa’s oldest national park.

There are many more examples. Forty-five years after the first Earth Day, and this is still the state of affairs.

The phrase essentially means “what's going on” in Jamaican Patois. Obama said it in front of a crowd of students at the University of the West Indies during a recent trip. Video of the speech quickly went viral, and some predicted it would soon be sampled in music all over the region.

As GlobalPost's Timothy McGrath writes, those predictions were accurate. Here are some of the best ways DJs are remixing one of the coolest things ever said by a US president.