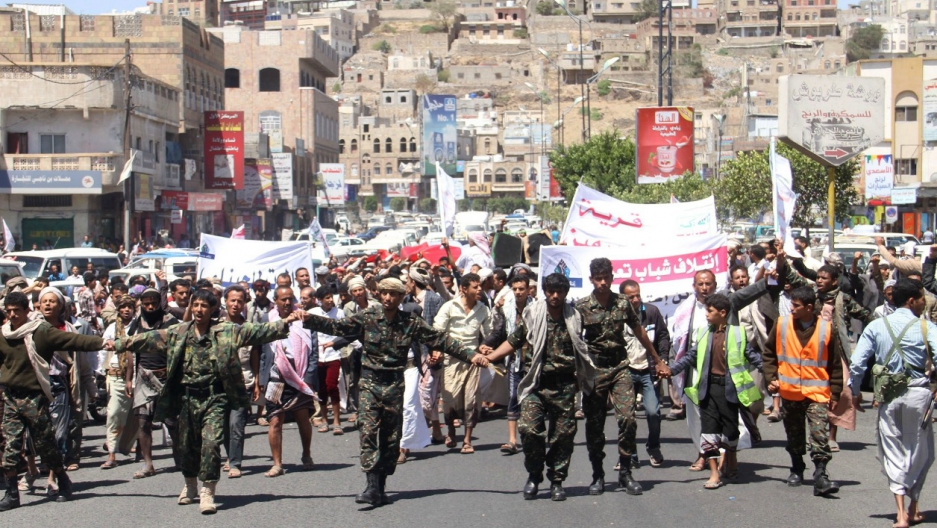 Yemeni Shiite Houthi rebels and supporters take part in a demonstration in the southwestern city of Taez against the Saudi-led military intervention in the country on March 29, 2015.
Credit: STRINGER
Share

The air strikes are targeting the rebels' southward advance on the port city of Aden, the last bastion of Saudi-backed president, Abed Rabbo Mansour Hadi.

Nuclear-armed Pakistan shares a long border with Iran, considered to be the center of Shiite power and has a warm relationship with Saudi Arabia, Iran's main regional rival. An estimated 20 percent of Pakistanis are Shiite.

"We have already pledged full support to Saudi Arabia in its operation against rebels and will join the coalition," the Pakistani official said.

A Pakistani team, to be led by Defense Minister Khawaja Asif and foreign policy chief Sartaj Aziz, had been due to arrive in Saudi Arabia on Monday but delayed the trip at the request of the Saudis, the official told Reuters.

"Pakistan remains firmly committed to supporting the sovereignty and territorial integrity of Saudi Arabia in accordance with the aspirations of the people of Pakistan," a statement from Sharif's media office said.

"Pakistan stands committed to playing a meaningful role in arresting the deteriorating situation in the Middle East."

There are already roughly 800 Pakistani servicemen in Saudi Arabia, but none are combat troops.

Pakistan has already had small demonstrations both for and against military intervention.

Sharif has long enjoyed close relations with the Saudi royal family. After his second term as prime minister was ended by a military coup in 1999, he was sent into exile in Saudi Arabia.