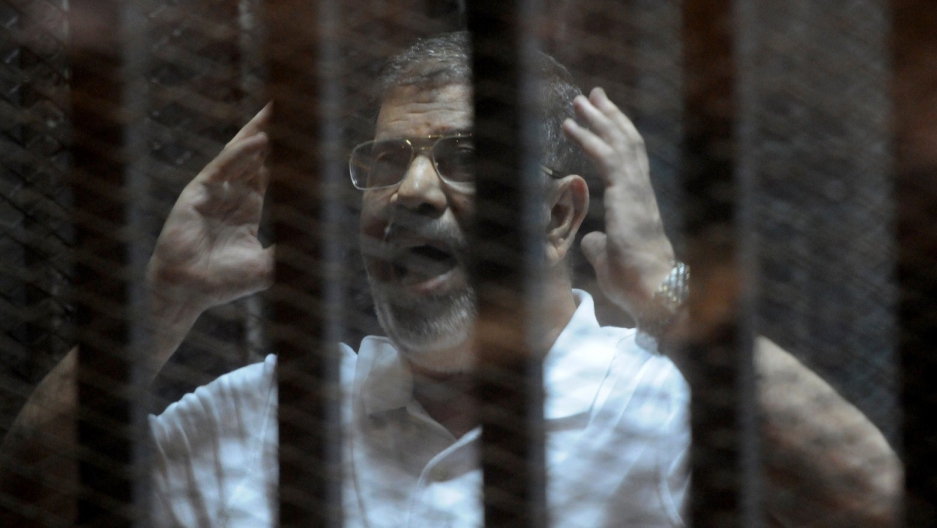 Egypt's deposed Islamist president Mohamed Morsi gestures inside the defendants cage during his trial at the police academy in Cairo on October 14, 2014.
Credit: Stringer
Share

CAIRO, Egypt — Former Egyptian president Mohamed Morsi, who was ousted in an army-led coup in 2013, has been sentenced to 20 years in prison with labor and five years of probation.

Morsi, who became the Egypt’s first democratically elected leader following Egypt’s 2011 revolution, received the sentence for the incitement of violence against opposition protesters outside the presidential palace in 2012, while he was in power.

Morsi was acquitted of murder charges relating to the same clashes which could have seen him given the death penalty. The sentence is the first to be brought down upon the leading Muslim Brotherhood figure, who was elected in 2012 following the January 2011 revolution that swept long-serving dictator Hosni Mubarak from power.

He may face the death penalty in two more cases: one on charges of espionage and the other in which charges range from breaking out of prison by force to stealing chickens. The verdicts in the remaining two cases are expected on May 16.

Morsi was ousted by the army on July 3, 2013, following a turbulent year in office marked by widespread protests. He has been in prison since.

Tuesday’s sentences come against the backdrop of a crackdown that has seen tens of thousands of Morsi’s supporters jailed and hundreds sentenced to death over the last two years. The Muslim Brotherhood has since been declared a terrorist organization by a new government led by President Abdel Fattah el-Sisi, a former army general.

The group’s Supreme Guide Mohamed Badie was sentenced to death on April 11 and appeared in court this week wearing the red prison garb worn by prisoners facing the death penalty. Many of the death sentences issued in previous cases have been overturned on appeal.

In November, a Cairo court overturned a life sentence issued in June 2012 against Mubarak for causing the deaths of 846 protesters.