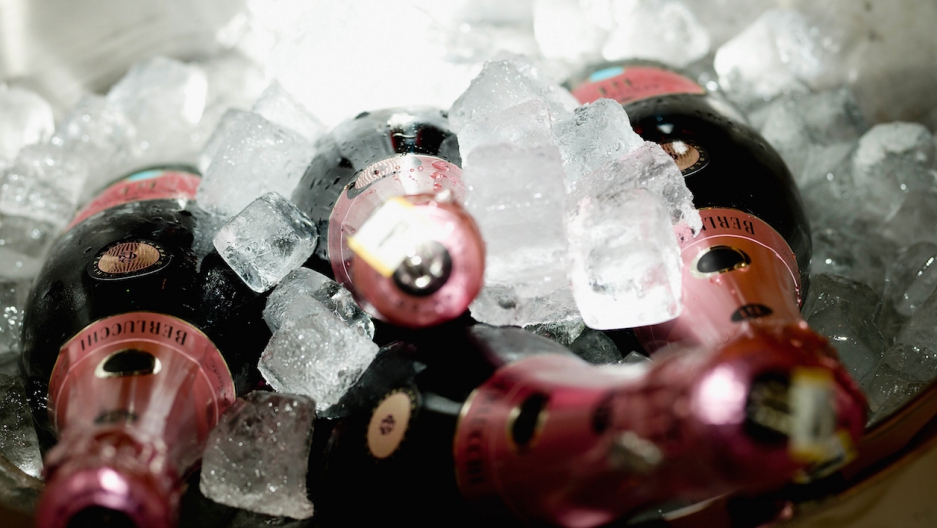 Things are looking up for Europe, but don't pop the bubbly just yet.
Credit: Johannes Simon
Share

LISBON, Portugal — Outside of Greece's latest flirtation with financial collapse, something odd is going on in the euro zone.

The currency bloc that's been a byword for crisis, stagnation and recession for the past six years actually seems to be doing rather well.

Just a few months ago, the euro zone's powerhouse economy looked to have run out of steam. There was talk it was poised to join southern partners languishing in recession. This week, a report by leading economic think tanks is predicting 2015 growth at a healthy 2.1 percent — almost double their previous forecast in October.

"The growth machine is back," wrote Handelsblatt, a Dusseldorf-based business daily. "It looks like Europe's largest economy can expect nothing but good news in the coming years."

One of the countries hardest hit by the debt crisis, it’s been mired in almost constant recession since 2009, with half the young people out of work and banks kept afloat by a 100 billion-euro ($108 billion) European Union rescue package.

Things started to look up in the middle of last year and the recovery is gathering pace. Figures last month showed 60,000 Spaniards had left the unemployment lines, the best result in 13 years.

Embattled Prime Minister Mariano Rajoy claims a million jobs will be created over 2014 and 2015.

"The government, and me in particular, are overjoyed because hiring figures in March are the best ever and first-quarter growth is positive for the first time in many years," Rajoy told Radio Nacional de Espana last week. "The trend has changed."

Ireland — which in 2010 was forced to follow Greece in seeking an international bailout — saw its economy expand by 4.8 percent last year, outpacing all other EU countries and growing at twice the rate of the United States.

Another bailout recipient, Portugal, is hoping for 2 percent growth.

Even Italy and France — long the laggards among Europe's major economies — are showing signs of progress.

The International Monetary Fund on Tuesday raised its 2015 growth forecast for France to 1.2 percent, compared to its previous 0.9 percent prediction.

Italy's improvement is more modest. Still, expected growth of 0.5 percent this year — after the economy contracted over the last three years — is giving hope to Prime Minister Matteo Renzi.

"Italy has been like sleeping beauty in the woods for too long. We are here to wake it up," he said during a trip to Washington last week. "It's not possible to backtrack."

Cheap oil and a weaker euro help turn things around

All that optimism is a far cry from the gloom at the start of the year. Economists then were predicting the euro zone would be sucked into a deflationary vortex of doom where falling prices and rising unemployment would condemn the continent to a century of stagnation.

After years of dragging down world growth, the euro zone is starting to make a positive contribution.

Investors are returning en masse to European shares. The Euro Stoxx 50 index of blue chips from around the euro zone has risen 20 percent over the past three months.

Cheaper fuel has been a shot in the arm for European industry, and has encouraged private citizens to spend more on other things.

Meanwhile, the fall of the euro by a fifth against the dollar over the past year has boosted sales by making European goods cheaper on world markets. EU exports to the US were up 18 percent in the first two months of 2015 compared to the same period last year.

The tentative recovery has been helped by the launch last month of the European Central Bank's long-awaited program to pump money into the economy by buying up 1 trillion euros ($1.08 trillion) in bonds up to September 2016.

With more money about, historically low interest rates, unemployment at the lowest levels since re-unification and wages rising faster than prices, Germany's notoriously cautious consumers are going on bit of spree.

Consumer spending should rise 3 percent this year, according to forecasts from the country's seven leading economic think tanks. That's good for all the other euro zone countries who sell stuff to Germans.

"There is clear evidence that the monetary policy measures we have put in place are effective," ECB President Mario Draghi said Wednesday in Frankfurt. "All institutions now see the prospects for a recovery."

"Downside risks are still there, but they are diminished. The issue now is to firm up this recovery and create conditions so that it's sustained through time," Draghi added, after being confetti-bombed by a youthful protester who leapt on his desk during the ECB's monthly news conference.

Those downside risks include Greece.

The radical Athens government elected in January is at loggerheads with the rest of the euro zone over labor and pension reforms, taxes and privatizations. Without agreement, its partners are refusing to hand over bailout money needed to keep the Greek economy afloat.

That could see Greece default on its debts and be forced out of the euro zone.

Although European officials insist the bloc is now better prepared to handle a "Grexit," the impact risks snuffing out recovery.

A Greek default could drain billions from European banks and governments. Market uncertainty would rattle investor confidence in the whole euro zone with the immediate risk of contagion hitting Portugal, Spain and Italy.

Even without the danger of a Lehman-like shock coming from Greece, the euro zone recovery is fragile.

Growth below 2 percent will mean many countries will take years to regain their pre-crisis economic strength. Government debt levels are dangerously high. Businesses — particularly small companies — are still finding it hard to get credit.

Unemployment is falling painfully slowly, raising the prospect countries like Spain or France could follow Greece in voting for radical new political solutions unacceptable to the euro zone mainstream.

Opposition in the streets and legislatures risks holding up reforms to modernize economies in Italy, France and elsewhere. Years of austerity policies have held back public spending on infrastructure and innovation needed to keep economies competitive.

Thinks are looking more hopeful, but it's going to be a while before Europe breaks out the bubbly, be it champagne, cava or prosecco.