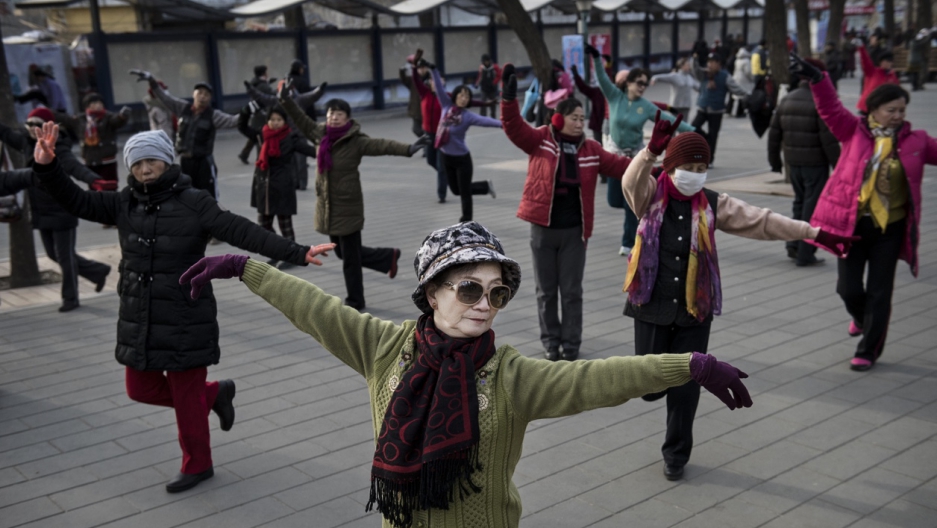 Chinese women dance as they exercise at a public park on Dec. 21, 2014 in Beijing, China.
Share

The seniors spend early mornings and whole evenings jiving in public parks, sidewalks and housing compounds to well-cranked mixes of techno, Mandopop or revolutionary songs. Their highly audible antics have long been a source of tension in densely crowded cities. So, last month, officials tried to start regulating the practice.

The first volley of official disapproval — timed to coincide with the warm weather that brings the “dama,” as they are known, out of hibernation — was a coordinated announcement from the General Administration of Sport, the Ministry of Culture, and state-run news wire Xinhua. It said that henceforth, “there will no longer be different dance routines for each community, but instead unified national routines,” chosen by an expert panel of fitness instructors.

For years, residents and neighbors have been clear: they’re fed up with both the noise and the encroachment on public space. The battle started with mere heckling. But it intensified. Soon angry neighbors were deploying homespun artillery, like water balloons and human excrement. One gun-toting man unleashed his dogs on the dancers. He was promptly arrested. And in one seemingly self-defeating move, a group of residents pooled $40,000 to buy military speakers — then blasted the elderly women with the sound of car alarms.

Most, however, seethe in silence.

The battleground over “dancing in the square” is emblematic of the particular tensions that have risen between older Chinese, raised in the collectivist spirit of the Mao era, and younger urbanites who, faced with extraordinary pressure to get rich and raise families, value their downtime. It also highlights the tricky nature of reining in a demographic whose sense of societal entitlement is both culturally ingrained, and increasingly deaf to changes around them.

Although the regulations were introduced — using the government’s latest buzz-phrase — to “spread positive energy,” the response was generally negative.

Critics of the grannies say their issue with them has nothing to do with choreography: it’s about the hours they keep, the noise they make, and the places they do it. And although well used to being bossed about by bureaucrats, the grannies also show little enthusiasm for the state-approved moves.

“I will never learn those dances,” one vowed to the Global Times, a Chinese tabloid. “I’d rather simply quit,” another told Shaanxi newspaper Huashing News. “They’ve no right to interfere.”

The five-month official campaign seems to be focused more on saving face among international visitors than preventing any use of loud, irritating music. One expert panelist singled out “strange and inelegant gestures” for criticism, for example.

Municipal authorities in China often seem embarrassed by their older denizens, and attempt to encourage more “civilized” behavior. For the 2010 World Expo, Shanghai’s leaders tried to minimize any danger to its image by warning, “Those who wear pajamas cannot go out.” The government has yet to issue any regulation on the dancers’ own garb, which can range from color-coordinated dresses to folk costumes and military uniforms.

The tradition for urban folk dancing grew from the guerrilla warfare of the 1940s, when Communist soldiers hid out with the peasants. They learned harvest-season dances and brought them to the cities they liberated. By the late 1960s, dancing was like every other form of artistic expression, either banned or completely politicized. Children instead learned “loyalty dances,” singing “No matter how close our parents are to us/ they are not as close as our relationship with Mao.”

Loyalty dancing faded after the Cultural Revolution, but public sashaying remained under attack in the 1980s by campaigns against “spiritual pollution.” Like most Chinese traditions, dancing survived the Communist Party edicts and, over time, grew in importance to older practitioners, particularly as economic growth, urban displacement and cultural differences eroded the family unit.

“Dancing is a social-network platform,” explained sociologist Kuai Dashen of the Shanghai Academy of Social Science, who said that the phenomenon has grown to include “cultural exchanges, matchmakers, product promotion and even gangs.”

One organizer, Zhang Li, was arrested last August in Beijing on suspicion of massive fraud. Zhang is said to have enjoyed cult leader-like status among her followers, who would compete to pay for meals and buy her jewelry in order to enjoy proximity to her while dancing in a downtown shopping area close to Tiananmen Square.

Zhang stands accused of running a Ponzi scheme that persuaded members to invest in the “Golden Horse company,” which supposedly helped pay for dancing equipment. Almost 40 retirees donated a total of 9.2 million yuan, or $14.8 million, expecting annual returns of up to 18 percent.

Most are attracted by the health benefits. Research suggests more than 60 percent join to stay fit. Most think dancing makes them happier and prevents diseases, thereby alleviating medical expenses. As such, they view dancing almost as an unassailable human right — putting them in confrontation with those who think the same about their privacy and peace.

When the phenomenon has shown up overseas, such as Moscow’s Red Square and Brooklyn’s Sunset Park, it’s attracted interest and admiration, but also complaints and police attention (and even one arrest). And although some rules in China do exist to keep dancers away from residential or public buildings — like hospitals — officials are rarely inclined to confront large, potentially cranky troupes of elders.

General Administration of Sport chief Liu Guoyong has now promised that community centers will be required to make room for the dancing dama. But whether they actually will, or whether that satisfies the women’s needs remains to be seen.

The dancing grannies are hardly troublesome enough to bother those with an eye on the big issues, like social stability and the economy. For them it is safer to let the seniors be rather than stir them up unnecessarily. As with so many nagging issues here, the government may be hoping time takes care of this one.