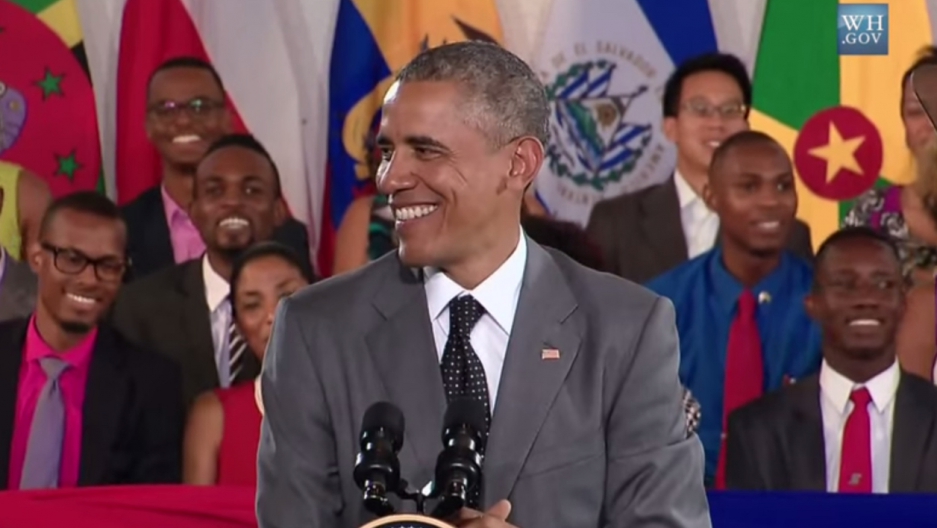 US President Barack Obama address students at the University of the West Indies during a visit to Jamaica on April 9, 2015.
Credit: White House
Share

Barack Obama visited Jamaica earlier this month. It was the first presidential visit to the country in 32 years, and Obama had a pretty packed schedule when he was there: He met with Caribbean leaders. He visited the Bob Marley museum. And he hung out with Usain Bolt.

But the thing we'll remember, and the reason Obama's Jamaica trip will go down in history as the coolest moment in his presidency, is what he said to a crowd of students at the University of the West Indies.

That was Obama's presidential rendition of a common patois greeting that means "what's going on." The video went viral immediately — of course — and soon people like Desus Nice, an internet celebrity and Bronx comedian, were predicting that Obama's "wha gwan, Jamaica" would soon be heard all over reggae, dancehall, and soca tracks.

Boy was he right.

Here are some of the best ways DJs are remixing the coolest thing ever said by a US president.

This song by remix artists Bombs Away has 49,000 listens on Soundcloud.

(Here's a look at how that track got made.)

Here are some more gems.

If you scrolled this far, here's your reward. Obama with Usain Bolt, striking the fastest man on Earth's famous pose.

What can I say.. It was truly a great honour meeting the President of United States of America @barackobama

And if you got this far, here's a "wagwan Jamaica" ringtone for you to download.

More from GlobalPost: A guide to smoking weed around the world