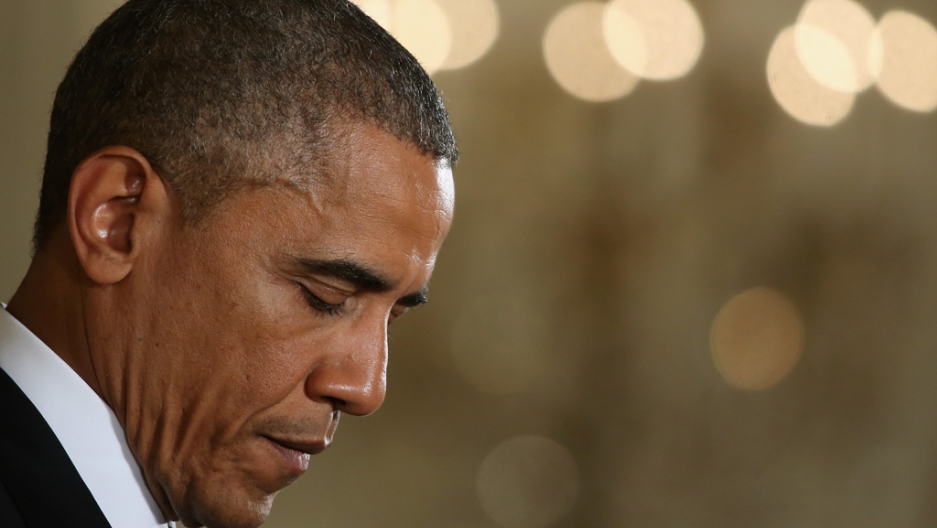 US President Barack Obama pauses while speaking to the media during a news conference in the East Room a day after Democrats lost the US Senate Majority, Nov. 5, 2014 in Washington, DC.
Credit: Mark Wilson
Share

The live blog is now closed. Please check the Breaking News scroll on our homepage for the latest news.

— Won't comment on whether the operation that killed hostages was a drone strike.

— The target was what officials knew with "near certainty" was an Al Qaeda compound. There were no particular human targets.

— Obama didn't sign off on the specific strike that killed the hostages.

— White House will offer compensation to the hostages' families. Now word on a dollar amount or on a process for arriving at one.

— US citizens and Al Qaeda affiliates Ahmed Farouq and Adam Gadhan were not targets of the strikes and were not listed as "high value targets." Would not comment on whether they could have been targets under the principles of the drone program.

12:00 p.m. EST — Who was Adam Gadahn, the American Al Qaeda affiliate killed in a US counterterrorism operation?

Among the three Americans accidentally killed in US counterterrorism operations this year was Adam Gadhan, an Al Qaeda spokesman who went by "Azzam al-Amriki."

How did a boy who grew up in Southern California on his family's goat farm grow to become the first American citizen charged with treason since World War II?

According to the New Yorker's 11,000 word profile of Gadahn published in 2007, it all started with death metal...

They published the heartbreaking statement on a Facebook page dedicated to him.

11:08 a.m. EST — Watch Obama's statement on the counterterrorism strikes that killed 3 Americans, including one hostage, and an Italian hostage

The family of Warren Weinsten, the American USAID contractor accidentally killed during a US counterterrorism operation in January, has published a statement on their website, bringwarrenhome.com:

"Bethesda, MD (April 23, 2015) – Following the announcement by The White House today that American humanitarian aid worker Warren Weinstein, who was abducted more than three and a half years ago in Pakistan, has died in captivity during a U.S. counterterrorism operation, Elaine Weinstein issued the following statement on behalf of the Weinstein family:

“On behalf of myself, our two daughters, our son-in-law, and two grandchildren, we are devastated by this news and the knowledge that my husband will never safely return home. We were so hopeful that those in the U.S. and Pakistani governments with the power to take action and secure his release would have done everything possible to do so and there are no words to do justice to the disappointment and heartbreak we are going through. We do not yet fully understand all of the facts surrounding Warren’s death but we do understand that the U.S. government will be conducting an independent investigation of the circumstances. We look forward to the results of that investigation. But those who took Warren captive over three years ago bear ultimate responsibility. I can assure you that he would still be alive and well if they had allowed him to return home after his time abroad working to help the people of Pakistan.

“The cowardly actions of those who took Warren captive and ultimately to the place and time of his death are not in keeping with Islam and they will have to face their God to answer for their actions,” Mrs. Weinstein said.

“Warren spent his entire life working to benefit people across the globe and loved the work that he did to make people’s lives better. In Pakistan, where he was working before he was abducted, he loved and respected the Pakistani people and their culture. He learned to speak Urdu and did everything he could to show his utmost and profound respect for the region.

“We cannot even begin to express the pain our family is going through and we ask for the respect of our privacy as we go through this devastating ordeal.”

While working as an economic development advisor, Weinstein was captured from his home in Lahore, Pakistan on August 13, 2011, and was held hostage for more than three and a half years.

“I want to thank Congressman John Delaney, Senator Barbara Mikulski, and Senator Ben Cardin – as well as specific officials from the Federal Bureau of Investigation – for their relentless efforts to free my husband.” Mrs. Weinstein added, “Unfortunately, the assistance we received from other elements of the U.S. Government was inconsistent and disappointing over the course of three and a half years. We hope that my husband’s death and the others who have faced similar tragedies in recent months will finally prompt the U.S. Government to take its responsibilities seriously and establish a coordinated and consistent approach to supporting hostages and their families.”

“I am disappointed in the government and military in Pakistan. Warren’s safe return should have been a priority for them based on his contributions to their country, but they failed to take action earlier in his captivity when opportunity presented itself, instead treating Warren’s captivity as more of an annoyance than a priority. I hope the nature of our future relationship with Pakistan is reflective of how they prioritize situations such as these.”

Here's the report from Reuters:

One American and one Italian who had been held hostage by al Qaeda in the border region of Pakistan and Afghanistan were killed in a U.S. counterterrorism operation in January, the White House said on Thursday.

U.S. President Barack Obama was scheduled to make a statement on the incident.

In a written statement, the White House expressed "tremendous sorrow" over the hostage deaths and said the United States had no reason to believe hostages were at the al Qaeda related compound targeted in the operation.

"Analysis of all available information has led the intelligence community to judge with high confidence that the operation accidentally killed both hostages," the statement said.

"No words can fully express our regret over this terrible tragedy," the statement added.

Weinstein was abducted in Lahore, Pakistan, in 2011 while working for a U.S. consulting firm. Al Qaeda had asked to trade him for members of the Islamist militant group being held by the United States.

Weinstein was seen in videos released in May 2012 December 2013, asking for Obama to intervene on his behalf and saying he was suffering from heart problems and asthma.

Italian aid worker Lo Porto has been missing in Pakistan since January 2012.

The White House did not describe the operation, but the Wall Street Journal reported that it was a the first known instance in which the United States has accidentally killed a hostage in a drone strike.

The White House said Obama "takes full responsibility for these operations and believes it is important to provide the American people with as much information as possible about our counterterrorism operations, particularly when they take the lives of fellow citizens.

"The uniquely tragic nature of the operation that resulted in the deaths of two innocent hostages is something we will do our utmost to ensure is not repeated," the statement said.

It said that while the operation "was lawful and conducted consistent with our counterterrorism policies, we are conducting a thorough independent review to understand fully what happened and how we can prevent this type of tragic incident in the future."

Italian media said Lo Porto, who was from Palermo, Sicily, was kidnapped three days after arriving in Pakistan on Jan. 19, 2012, to work for a German organization building houses for victims of a 2010 flood.

Another man was kidnapped with him but later separated and freed in October 2014 by German special forces.

9:55 a.m. EST — The White House announces that a US drone strike killed 3 Americans and one Italian in January

Huge news today from the White House, which released a statement saying that a drone strike in January targeting Al Qaeda in the border region between Pakistan and Afghanistan accidentally killed two innocent hostages, one an American and the other an Italian.