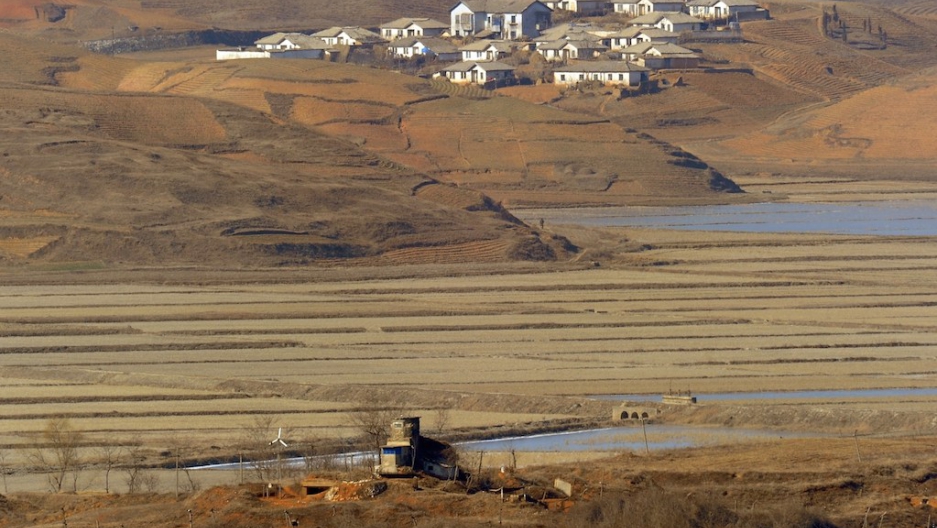 A North Korean guard post, seen from a South Korean observation tower in Paju near the Demilitarized Zone dividing the two Koreas, on December 23, 2011. Reports of rampant recreational drug use of amidon are trickling out of the country.
Credit: Prakash Singh
Share

SEOUL, South Korea — For years, crystal meth has been the intoxicant of choice for North Korean drug users. They take the stimulant recreationally, or occasionally to work long hours or suppress unsatisfied appetites in the impoverished countryside.

But these days, boy dictator Kim Jong Un’s embattled subjects are turning to a different drug: amidon, according to a report in DailyNK, a leading site covering everyday life in the hermit kingdom.

People are getting so hooked that they’re selling their belongings to inject more of the addictive painkiller, says a source who was identified by DailyNK as a trader from North Korea’s second largest city, Hamhung, a hub for the drug’s production.

“The number of female users is also on the rise,” he told the site. “They use it to relieve fatigue from working in the markets and undergoing forced labor. It’s also secretly given as a gift on holidays, like the Lunar New Year.”

The website carried a satellite image of a building in Chongjin, a trading hub not far from the Chinese and Russian borders, which a North Korean defector alleges is a sales point.

Aside from the DailyNK report, little is known about the extent of amidon use in North Korea. Two North Korean defectors in Seoul, who fled the country in the mid-2000s, said that while they have heard of a possible amidon use in the northeastern part of the country, details of the trade are hazy.

Sheena Chestnut Greitens, a non-resident senior fellow at the Brookings Institution who researches the North Korean drug trade, told GlobalPost that she has heard anecdotal reports about amidon recently.

Once a government-run industry, North Korea’s recreational drug trade has shifted mainly to private hands. The country is home to all sorts of abandoned, dilapidated factories, giving would-be traffickers locales to manufacture drugs for domestic consumption and export to China.

Amidon, commonly called methadone in the West, has roots in World War II, when the German military needed a powerful drug for its wounded and dying. “Amidone was the trade-name for Methadone before the German manufacturers dropped the patents after the Second World War,” said Justice Tettey, chief of the science section at the United Nations Office for Drugs and Crime. “Other slang terms include polamidon and amidon.”

Around the world, the drug has found use as treatment for heroin and morphine addicts, and for patients in severe pain. In the US, amidon overdoses kill about 5,000 people a year, more than the number of heroin or cocaine fatalities.

Amidon is derived from the opium poppy, the same plant that produces opium. North Korea has been home to an opium trade for decades, and this drug essentially serves the same purpose, Greitens expains.

In 1992, Kim Jong Il, the now-deceased father of Kim Jong Un, launched what he called the “Balloon Flower Business,” a campaign to make poppies a national source of income.

It’s possible that amidon won’t replace crystal meth as a drug of choice in North Korea, according to Greitens. “Methadone is an opioid and [meth] amphetamine is a stimulant — they are made with different materials and have different effects — so you could easily have a situation in which both are popular,” she says.

“Medicine shortages and lack of availability of health care in North Korea also contribute to the popularity of illicit drugs.”