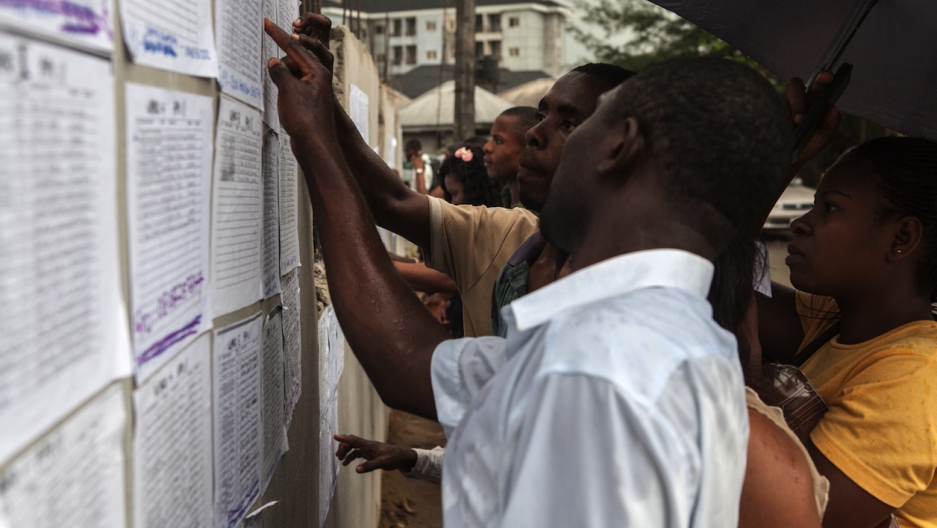 Volunteers check their ballot station positions in the Bayelsa state capital of Yenagoa on the eve of Nigeria's presidential election.
Share

ABUJA, Nigeria — Election day in Africa’s most populous country can feel like the eye of a storm.

There’s a lot of bluster going in, fear and uncertainty over the fallout — and amid the general chaos, an eerie moment of calm. In Nigeria, all vehicle movement on the country’s notoriously noisy, traffic-congested roads is shut down on voting day, a measure intended to prevent electoral fraud.

Nigerians are voting Saturday, following a six-week delay, in what are being called the most competitive elections to date.

The 2011 polls were hailed as the best yet — though it wasn’t hard to beat the disaster of 2007, described by European Union observers as among the worst elections they had ever seen. Nevertheless, following the 2011 results, riots broke out in the country’s north and more than 800 people died.

Nigeria gained independence in 1960, but has never experienced a democratic transfer of power between different political parties. The country spent much of the past 50 years under military rule, returning to democratic elections only in 1999.

Clement Nwankwo, executive director of the Policy and Legal Advocacy Center in Abuja, said this election could actually be free and fair thanks to the new system of biometric voting cards and hand-held electronic card readers.

“I think it’s a huge improvement from 2011,” Nwankwo said. “The challenge is with a ruling party that is reluctant to have elections.”

There is trepidation over what is considered a tight race between the incumbent, President Goodluck Jonathan, and the main opposition candidate Muhammadu Buhari, a former military ruler.

The two men squared off in 2011, with Jonathan winning 59 percent of the vote. This time the results are expected to be closer, but with no credible political polls, it is hard to gauge the likely outcome.

Some 60 Nigerian civil society groups will be monitoring the voting process through the Situation Room, with people reporting back from across the country. This is a major task: there are 150,000 polling stations in Nigeria, 30,000 more than in 2011.

Jonathan and Buhari this week signed an agreement promising to respect the outcome of a credible poll, and urged their supporters to refrain from violence regardless of the result.

There is still the ever-present threat of an attack by the Islamist group Boko Haram, which is on the back foot after a six-week military campaign by Nigerian and regional armed forces.

“The 2015 general elections are imperiled by threats of violence,” a recent Situation Room assessment said.

The polls were postponed from Feb. 14 after Nigeria’s military told election officials that it would be unable to provide security because its solders were tied up with fighting Boko Haram.

Victor Pius, 29, a civil servant from Michika who fled after Boko Haram seized his town, said he has been dreading the elections because of the chance of violence.

There are also the usual concerns about electoral fraud, even in crude forms — such as snatching ballot boxes, or the buying and selling of the new voter cards.

And then there’s the potential for logistical problems. In 2011, the election was postponed mid-vote after ballots and tally sheets failed to reach some of the polling stations.

This time there is the additional challenge of 1.2 million people displaced by Boko Haram in northeast Nigeria. In January, Nigeria’s parliament amended the electoral law to allow these people to cast their votes at special facilities.

Moses Zaruwa, 45, a university professor who fled the town of Mubi when Boko Haram attacked, said he is very worried about the potential for violence after the elections. "We all are," he added. "Nigerian politicians are bad losers."

Zaruwa said that whether or not he will return home depends on the outcome of the vote.

The winner of the presidential race will need to get at least 25 percent of the ballots in two-thirds of Nigeria’s 36 states. If there is no clear winner, then a run-off election must be held within a week.

Dauda Bello, an imam based in the northeastern city of Yola, said he is hopeful Nigeria's security problems will ease following the polls.

"Everybody is hoping that after these elections the new government will be able to take care of all the problems, and allow the IDPs
[internally displaced people] to go back to their base," he said.

"But even if a new government comes in there are still challenges of security, and it will take time before whoever is in the leadership tries to quell this insurgency as well as post-insurgency challenges.

"And also, you find that even if those people are going back to their homes, they have nothing to go back to."