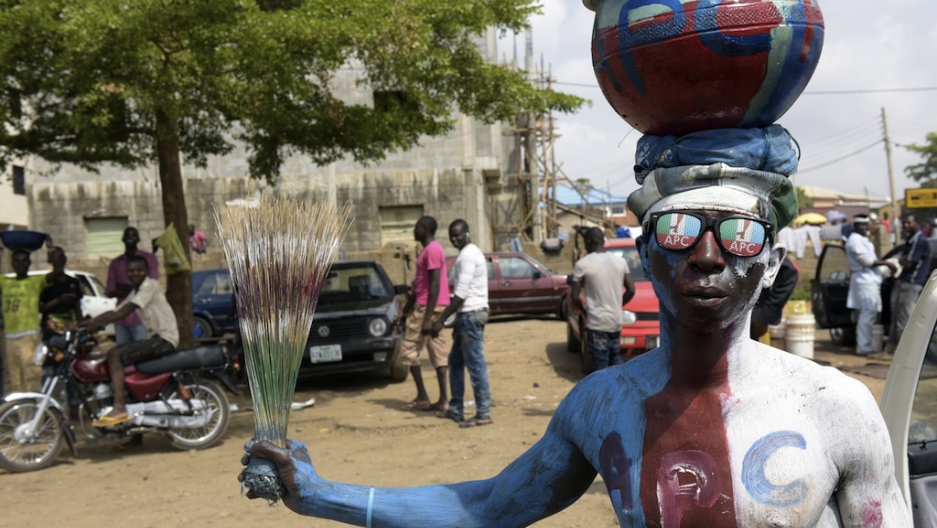 A man wears glasses and body paint adorned with the logo of Nigeria's main opposition All Progressives Congress (APC) as residents await results of the presidential election in Abuja on March 30, 2015.
Share

Nigeria is counting the ballots from its presidential election, which couldn't be more important.

Here are a couple quick stats about Nigeria to give you a sense of why it matters: More than 170 million people live there, making Nigeria Africa's most populous country. It is also Africa's largest economy. And Africa's largest oil producer.

But in these apocalyptic days, there is another reason why this election is important: Boko Haram. The terror group, which just pledged its allegiance to the Islamic State, calls Nigeria home. And while it started out as a militant organization fighting against a corrupt government, abject poverty, and perceived Western encroachment, it has blossomed into the kind of organization that kidnaps children and turns them into suicide bombers.

Goodluck Jonathan, the current president of Nigeria whose first name is not all that apt, has largely failed to combat the group's ideology and military advances across the country. So opposition leader Muhammadu Buhari looks poised to defeat Jonathan after five years in power.

Buhari has campaigned mostly on an anti-corruption platform. But as a former general and former president who took power for a short two years after a military coup, Buhari might be better equipped to respond to the threats from Boko Haram.

While 50 people died during voting, observers say there were no major incidents of fraud reported. Of course, whoever loses will probably say otherwise.

Indonesia is home to 250 million people, making it the fourth largest country by population in the world. More than 80 million of those people are on the internet. And that number is expected to grow fast. There are more than 50 million active smartphone users. That number will double by 2018.

Residents of Jakarta, Indonesia's capital, tweet more than the residents of any other country on Earth. They joke that this is because Jakarta is also home to the world's worst traffic congestion. Indonesians straight-up love sharing things online. And it was Indonesians who invented the selfie stick.

When Indonesians get excited about something, it'll often make it to the top of worldwide trends on Twitter in just a few hours. It happened when the country's president nixed fuel subsidies and everyone freaked out. And it happened when the Australian prime minister said something he likely now regrets.

It is in this frenetic web climate that WowShack has debuted. It is basically Indonesia's answer to Buzzfeed, with a slightly more awkward name. It launched in November with listicles and quizzes and is already taking in millions of visitors a month.

This photo went viral yesterday. It's said to be a picture of a little Vietnamese girl sobbing after finding her pet dog killed and displayed at a local meat market. If it can be worse, the dog's name was "Flower."

It's a sad story. It's also an entirely unconfirmed story. But things like this are likely to happen in Vietnam, where criminal gangs steal pet dogs like Flower and sell them to dog meat vendors. Dog meat has long been a delicacy in Vietnam. So this black market trade can bring in profits that rival drug dealing.

The issue is the subject of GlobalPost's upcoming investigative documentary series, "Dog Thief Down." GlobalPost Senior Correspondent Patrick Winn traveled to Vietnam where he met people who eat dogs, the people who love them, and the people who steal them for cash. It's the world behind the viral photo. Watch the trailer: