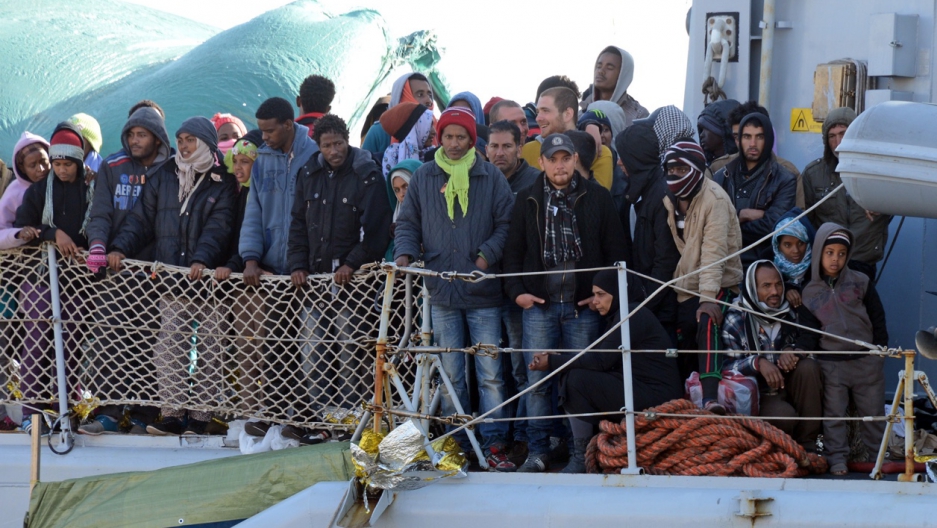 A surge of migrants pouring into Europe from across the Mediterranean won't end before chaos in Libya is controlled, Italy's prime minister said yesterday. Italian authorities have rescued more than 11,000 migrants making the often deadly voyage from North Africa in the past six days, with hundreds more expected, the Italian coast guard said.
Share

Iraqi and Kurdish forces battling the Islamic State in Iraq and Syria can call in a US airstrike faster than you can say civilian casualty. And that's a little worrying to a lot of people.

GlobalPost Senior Correspondent Richard Hall traveled to Iraq and talked to a mid-level Kurdish commander who said, for him, an American airstrike was just a phone call away. In one example, the commander told Hall that it took just 25 minutes for American jets to respond to his request. The speed of the response raises questions about how carefully the targets are being vetted.

Independent analysts believe that since the United States and its Western allies began offering air support in the fight against the Islamic State last year, hundreds of civilians have been killed. The US military, on the other hand, believes that number is closer to zero. While there are numerous local reports of civilian casualties caused by airstrikes in both Iraq and Syria, the United States says it has not been able to confirm any of them.

Civilian casualties could go a long way toward undermining the fight against the Islamic State. When civilians die, sympathy grows for the terrorist organization, swelling its ranks. It's a process that has been repeated all over the world, from Yemen to Pakistan and beyond.

Now, with an offensive looming on Mosul — a densely populated Iraqi city of 1.5 million that is fully-controlled by the Islamic State — anxiety about the potential for civilian deaths is growing. There is little chance Iraqi or Kurdish forces will be able to take Mosul without the support of American airstrikes. And what are the chances the American airstrikes can avoid killing civilians in such a crowded city?

The most disturbing part of this tragedy is that no one really knows how many people were killed. It could be a few hundred. It could be almost a thousand. Either way, the European Union appears to be finally waking up to the problem.

A boat carrying migrants — refugees is likely a better word — from North Africa to Europe capsized over the weekend. It's the second boat to go down in a week. The United Nations says the total number killed is more than 900. It could be a lot more.

The people on board are fleeing war, poverty, persecution, oppression, you name it. They are coming from North Africa and the Middle East and as far away as South Asia. Most of them are making their way through the chaos of Libya, boarding overcrowded fishing boats and often paying crooked human smugglers to guide them across the Mediterranean to Italy.

The European Union, which took over sea patrols from the Italians earlier this year, has been criticized for not doing more to help them. EU boats meander a few miles off the coast of Italy, which is hardly far out enough to protect anyone from much of anything. In addition to helping refugees, there is another issue at hand: some worry that terrorists from the Islamic State or Al Qaeda or any number of other groups could easily pose as migrants and make their way into Europe from Libya.

After the two tragedies of the last week, the European Union is holding an emergency meeting in Luxembourg today. High on the agenda will be the state of affairs in Libya, which has become the definition of a failed state, a place where numerous factions are waging an open and violent struggle for power. Help Libya, and stem the flow of refugees, is the idea.

The mayor of Ankara — that's the capital of Turkey — gave his constituents a whimsical surprise on April 2. Outside the new presidential palace, he unveiled a 20-foot statue of a robot. It's a pretty cool statue if you are into that kind of thing. It “seems purposefully made to look as much like a Transformer as possible without violating copyright laws,” writes GlobalPost's Timothy McGrath.

Ankara residents thought it was an April fool's joke. And the Turkish Chamber of Architects and Engineers was straight-up livid. Turns out the robot was not a generous gift from a generous mayor. It was a taxpayer-funded project that is part of the mayor's “prestige project,” which he is calling AnkaPark.

The chamber has filed a legal complaint. And in response, Ankara's mayor took to Twitter. And it was hilarious.