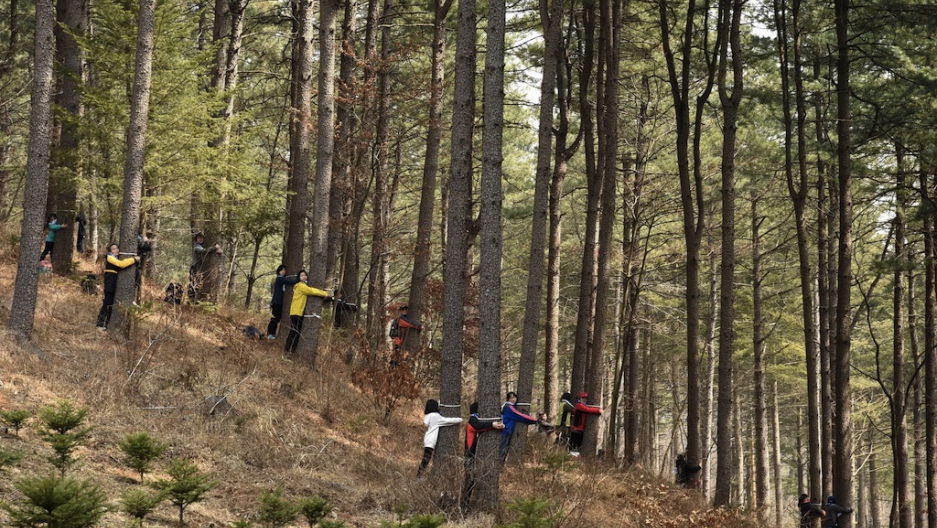 South Koreans attempt to break the record for most tree hugs in one minute in a forest near Seoul on March 21, 2015. (Korea National Arboretum)
Share

SEOUL, South Korea — It was the International Day of Forests on Saturday. So it was a good time to break the slightly odd world record for “largest tree hug in one minute.”

It wouldn’t be easy. Portland, Oregon — to no one’s surprise — has held the record since 2013, when 936 people hugged a bunch of trees for one minute. But the people of Seoul intended to try, and to make a statement about South Korea’s own environmental success.

A few more than 1,220 Koreans stood in position just north of Seoul of Saturday afternoon, listening to a countdown before they began to take in their embrace an unusually large number of trees. The Korean National Arboretum, which organized the even, said they not only probably broke the record, they continued to hug the trees for a full 10 minutes, as they waited for officials to make their count. Glorious.

It’s appropriate that South Korea hold the record. It is the site of a pretty amazing environmental turnaround. Once upon a time, the country was an ugly industrial hub, pumping out thickets of pollution. South Korea was kind of like China is today.

By the second half of the past century, the forests and mountains of the once-scenic peninsula had pretty much been stripped clear, thanks to mining, logging and other extractive industries. The devastation of the Korean War from 1950 to 1953 did not help. And it all only got worse as the country rocketed toward industrialization in the latter part of the century. “Black growth” was the term that described the relentless assaults of coal and smog.

But in recent years, a growing number of national campaigns have pushed for “green growth.” Starting a generation ago, the government encouraged citizens to relentlessly plant fast-growing trees, reinvigorating their peninsula’s splendor.

South Koreans attempt to break the record for most tree hugs in one minute in a forest near Seoul on March 21, 2015.

Forested land has doubled since the 1950s, and about two-thirds of the nation is now covered in canopy, mostly enveloping its spiny mountain ranges. Industrial centers like Seoul and Ulsan, whose rivers were once blackened and skies smoky, have begun to clear up.

Hiking and camping are now national pastimes. South Korea is about the only country where there’s such a thing as haute couture hiking.

Environmentalism, in fact, has become one of Korea’s great exports. In 2008, the country started a program to help North Korea plant more trees. It has since expanded the program to Mongolia and China.

It’s all just another reason to love Seoul.