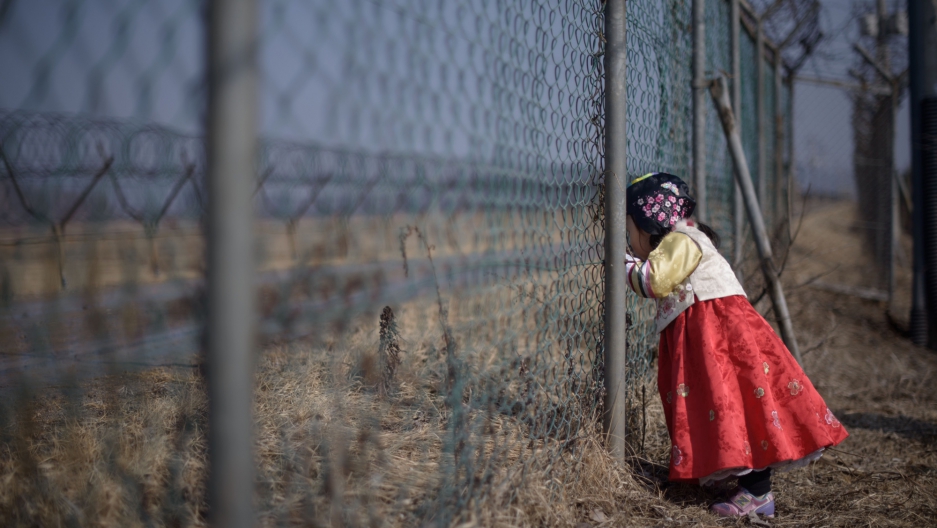 A girl stands at a military fence facing toward North Korea and the Demilitarized Zone (DMZ) separating North and South Korea on Feb. 19, 2015.
Share

SEOUL, South Korea — The ironically named de-militarized zone (DMZ) is a 160-mile long buffer of landmines, guard posts, and barbed wire between North and South Korea. It is a potent symbol of division and suffering for citizens on both sides of the peninsula.

So naturally it's a great place for a wedding.

A South Korean couple has announced they will take the plunge, as they say, near the DMZ in a Korean War-themed ceremony. The unusual choice for a destination wedding is meant to be a theatrical statement in support of Korean reconciliation.

The bride and groom, Lee Yo-sep and Choi Ji-hyeon, took wedding photos dressed in historical North and South Korean military uniforms. They called their ceremony a "little flower of peace that blossoms over the pain of division," according to a South Korean newspaper.

Though not everyone supports the idea, the DMZ has long attracted artists, poets and advocates promoting the cause of unification.

On March 13, a group of prominent peace activists in New York announced plans to walk across the DMZ — yes, walk across a strip of landmines — on May 24. The gesture of international peace was endorsed by two Nobel Peace Prize winners and Gloria Steinem, the feminist icon of the late 1960s and 1970s who chaired the announcement.

“It’s hard to imagine a more physical symbol of the insanity of dividing human beings than this zone. To me, to walk across it, has huge, huge, huge importance,” she told Agence France-Presse at the time.

It may be an age-old symbol of human suffering, but parts of the DMZ are actually pretty nice. With so little human activity, large areas are now covered in foliage and teeming with wildlife. But that's not where the wedding will be held.

No, instead, the location will be a bombed-out former headquarters of the North Korean communist party — preserved with bullet holes and other markings of war — which now sits on the southern side of the border in the countryside town of Cheorwon.

Lee and Choi plan to reenact scenes from the Korean War during the ceremony, culminating with a rendition of a patriotic children's song called, "Our Dream Is Unification."