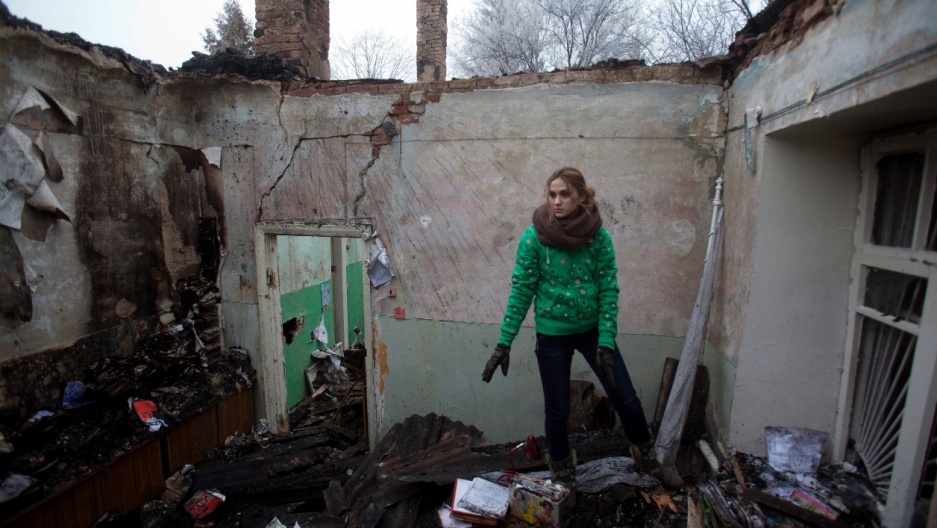 A member of the medical staff salvages items from the rubble of a destroyed clinic in the village of Opytne on February 15, 2015, a day after it was destroyed during shelling by pro-Russian rebels.
Credit: PETRO ZADOROZHNYY
Share

EVANSTON, Illinois — While the global health community has been rightly focused on containing West Africa’s deadly Ebola outbreak, a potential health crisis involving another infectious virus — polio — worries many of the same experts.

Strife-torn Ukraine is especially vulnerable. In September 2014, the World Health Organization (WHO) described the ominous conditions there: Hundreds of thousands displaced people with low immunization coverage, a weak health system plagued by shuttered hospitals and a shortage of health workers in areas hardest hit by the ongoing conflict between government troops and rebel forces aligned with Russia.

Particularly disturbing was the disclosure by a WHO official in Ukraine that the country has no vaccines in storage. Polio is a paralyzing virus that most often strikes children but is completely preventable.

Europe has been polio-free since 2002. Polio’s potential re-emergence in Ukraine would be a huge setback to the Global Polio Eradication Initiative, which launched in 1988.  Globally, polio is nearly eradicated, down from about 350,000 cases a year in the1980s to only 416 in 2013. Last year, another major milestone was reached — the entire WHO South-East Asia region was declared polio-free.

Many adults recall the horrible polio epidemic that swept the world into the 1950s, just as effective vaccines were being developed. Now, with polio this close to being eradicated, the specter of its return to Europe is the stuff of nightmares.

Today only Afghanistan, Nigeria, and Pakistan remain polio-endemic, but anyone traveling to and from those countries can carry the virus to other areas. This has happened in several countries, including Syria.

Syria’s situation is relevant to Ukraine, where conflict has waged off and on for months. As a WHO official in Ukraine said in news reports, polio “usually comes in countries in turmoil.”

Concerns over polio in Ukraine emerged even before the unrest that began last November. UNICEF had issued a previous warning that “dangerously low immunization coverage” put the country at risk for a polio outbreak.

The only way to stop polio for good is to achieve total eradication and wipe it out in the endemic countries, cutting off the virus at its source. This is the goal of the global polio initiative by 2018.

Until that goal is reached, the global community must remain vigilant in its resolve to vaccinate every child.

WHO took immediate steps to avert a full-blown public health crisis in Ukraine. WHO, along with UNICEF, planned a mass polio and measles vaccination campaign, and amassed vaccines, medications, surgical supplies and other vital medical gear to help approximately 340,000 people.

Political leaders on both sides of the dispute in Ukraine must recognize public health is at stake and facilitate efforts of WHO, UNICEF and other agencies as they provide assistance to families at risk. In addition, national resources must be redirected to shore up Ukraine’s badly compromised health system.

The world cannot stand by and wait for a public health emergency to emerge in a region whose people have endured so much over the past year.

John Hewko is general secretary of the humanitarian organization Rotary International, a spearheading partner in the Global Polio Eradication Initiative. As an international lawyer in Ukraine in the early 1990s, Hewko assisted the working group that prepared the initial draft of Ukraine’s first post-Soviet constitution.