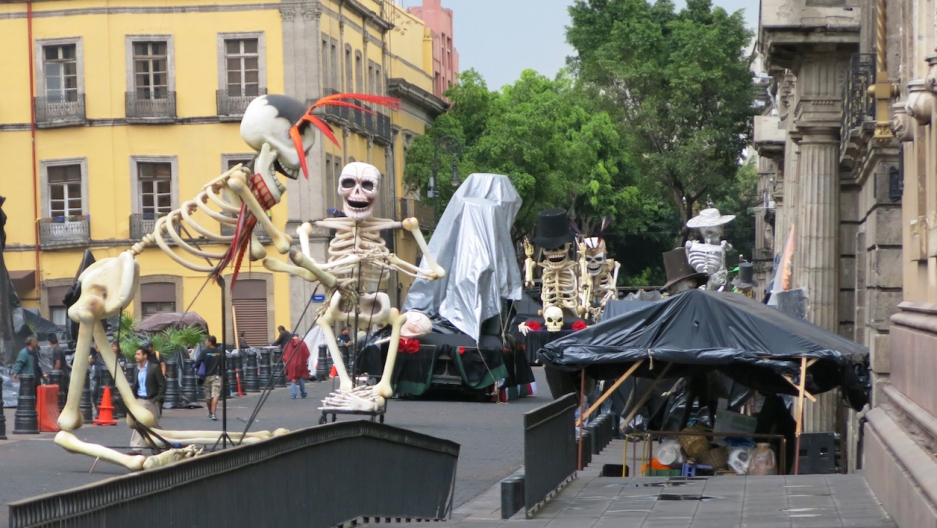 MEXICO CITY — The combination of James Bond espionage and Mexico’s crime and chaos always promised to be a sizzling cocktail. But the stories emerging out of the filming of “Spectre” in the Mexican capital have dramas worthy of a spy flick themselves.

The real-life plots spin from corporate hacking to dictators to government bribes to narco police.

But it is not all scandal. The iconic British agent has also brought his trademark glamorous women and explosive action scenes to Mexico City’s historical center.

Filming began here March 19 and runs all this week. The movie might struggle to be as outlandish as reality when it hits the screens in November. GlobalPost looks at the highlights.

In December, before James Bond got anywhere near Mexico, Sony Pictures was hit by what its CEO called “the worst cyber attack in US history.” (Which is pretty hard to verify.)

US intelligence agents say North Korea was behind the hack in reaction to the Sony comedy “The Interview,” about TV reporters trying to assassinate Kim Jong Un. Pyongyang denies involvement.

The hackers ripped a plethora of embarrassing emails and data from Sony. They stole and leaked a “Spectre” script, including major plot spoilers. And they exposed dealings over the movie that spilled controversial details about the Mexico shoot.

On March 3, the website Tax Analysis broke a story, based on one of the hacked Sony emails, that Mexican officials were giving the filmmakers between $14 million and $20 million in tax cuts on “Spectre.” In return they wanted significant changes to the script to help Mexico’s image, which has been tarnished by drug violence, the story said.

These alleged tweaks included changing the nationality of an assassin from Mexican, showing shots of Mexico City’s modern skyline rather than slum streets, and switching a cage fight to a traditional Day of the Dead parade.

While tax incentives are normal for movies, Tax Analysts said the tradeoffs went “well beyond that, with the studio permitting Mexican authorities to make casting decisions, dictate characters’ ethnicities.”

Mexican officials have refused to comment on the issue.

We are pleased to announce that @SigmanStephanie has joined the cast of #SPECTRE as Estrella pic.twitter.com/63ibzmlFFz

A few days before shooting began, Sony announced that Mexican model and actress Stephanie Sigman would be in the role of “Estrella.”

According to the Tax Analysis story, officials had requested a Mexican woman to be cast as part of the conditions; Wilson said they always thought a Mexican should play that part.

Sigman, 28, came to fame in the 2011 movie “Miss Bala” (“Miss Bullet”), playing a model who is coerced to become a drug trafficker’s girlfriend. Since then, she has featured in more cartel-themed hits, including TV series “The Bridge” and upcoming series “Narcos,” which debuts on Netflix.

While the crew was shooting Saturday, activists gathered with a banner calling for James Bond to find Mexico’s 43 students who disappeared six months ago at the hands of corrupt police and cartel hitmen.

“Help, 007! We ask for your help to find the 43 students of Ayotzinapa. Imprison the gang of corrupt officials,” read the banner in Spanish.

Mexico’s attorney general has said that cartel thugs burned the students at a garbage dump and threw their remains in a river. Families of the disappeared refuse to accept this account and have called for a continued search.

A Mexico City street turns to rubble in a scene in the James Bond movie 'Spectre.'

On Tuesday, the “Spectre” team simulated a bomb blast and pile of rubble in Mexico City’s historical center. The scene also included a real armored Mexican police truck hurtling down the street at full speed.

While providing juicy action, the shoot snarled traffic in the always-gridlocked streets. Local shopkeepers also complained the bangs and cordoned-off areas were costing them dearly. A business lobby said sales were down 20 to 40 percent in the areas of filming, Spanish-language site CNN Expansion reported.

“I don’t mind them filming but we should be paid some compensation for this,” said Roberto Salas, 45, who was lining up at a security point to be able to get to his newsstand in the area.

Many residents, however, came to watch and take photos of the production.

“I think it is great they are making this here. It is good that Mexico City is in big films,” said student Reyna Galvez, 22, as she took photos with her cellphone. “I can’t wait to see it in the cinema.”

Correction: A previous version of this article mistakenly stated that actress Stephanie Sigman is Mexico's "first Bond girl." That title actually goes to the late Linda Christian, who acted in a 1954 TV adaptation of the Bond novel "Casino Royale." The article has been corrected.

Here's the just-released trailer for "Spectre."