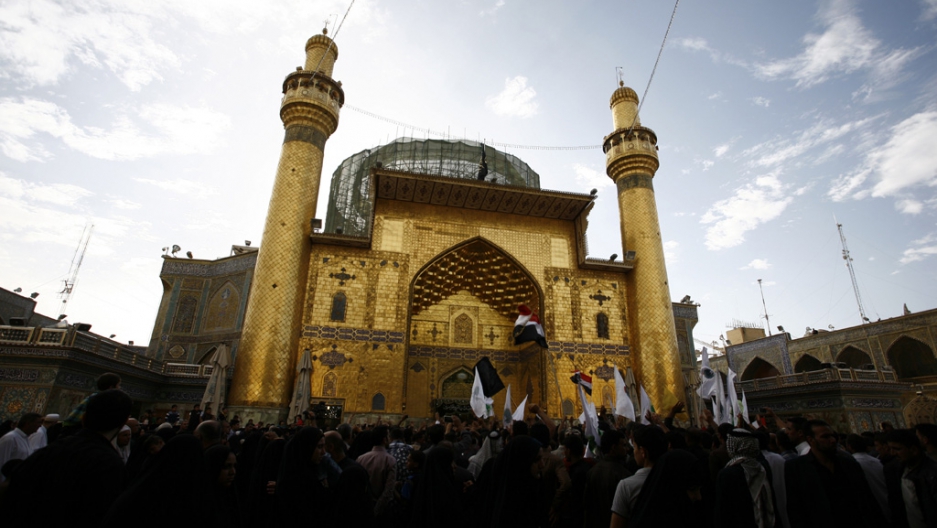 Iraqi mourners take part in the funeral of members of the Popular Mobilisation units, who died in combat against Islamic State fighters in Tikrit, at the shrine of Imam Ali in Iraq's central city of Najaf on April 3, 2015.
Credit: HAIDAR HAMDANI
Share

ERBIL, Iraq — The Iraqi government declared a “magnificent victory” in Tikrit on Wednesday as it forced Islamic State militants from the city. Ten months after it was overrun, Prime Minister Haider al-Abadi was pictured walking through the streets in celebration, an Iraqi flag in hand.

But there was a familiar and troubling footnote to the victory, one which bodes ill for the government’s attempt to wrest control of central and western Iraq from the militant group.

Since it began its campaign to recapture areas taken by the Islamic State, a question that has been continually asked of the central government is whether it can win back Sunni cities without further deepening the sectarian resentment that allowed the militant group to capture those areas in the first place.

When the Islamic State swept through much of Anbar province in June, the Iraqi army melted away without much of a fight. For many Sunnis living in those areas, the extremist Islamic State represented less of a threat to their security and well-being than the authoritarian and sectarian government of Nouri al-Maliki, who many saw as representing Shia interests above all else. A brutal crackdown on a Sunni protest camp in Anbar in December 2013 is pointed to by many as a key turning point in the Islamic State’s rise in Iraq.

Now, under Prime Minister Abadi, the Iraqi army is engaged in a campaign to retake those areas. Despite efforts by Abadi to reign in the militias and present the government as less sectarian, the army’s weakness has forced it to rely heavily on Shia militias to do so.

The fight to take Tikrit was no different. Fighters from the Iran-backed Popular Mobilization Committees played a key role in recapturing the city, taking a back seat only briefly from the month-long battle when the US launched airstrikes to help the Iraqi army’s advance.

What came after the battle, forewarned though it may have been, suggests Abadi’s task will be an uphill struggle.

In a similar scene to that which played out in a number of smaller towns already recaptured, a detailed report from Reuters describes chaos in Tikrit, as the Shia militias who helped to retake the city quickly sought revenge.

Witnesses in the city told the news agency that militiamen burned dozens of homes and looted shops and local businesses. Reuters reporters describe witnessing the beheading of a suspected Islamic State fighter who had been captured.

“Near the charred, bullet-scarred government headquarters, two federal policemen flanked a suspected Islamic State fighter. Urged on by a furious mob, the two officers took out knives and repeatedly stabbed the man in the neck and slit his throat.”

A report in the Wall Street Journal painted a similar picture. Ahmed Al Krayam, head of Salahaddin provincial council, told the newspaper: “Tikrit is under chaos and things are out of control. The police force and officials there are helpless to stop the militias.”

Many saw it coming. Militias had said the battle for Tikrit would serve as revenge for the massacre of 700 mostly Shia soldiers at Camp Speicher in June last year.

The aftermath of the battle in Tikrit mirrors similar events in other cities retaken by the Iraqi army and Shia militias.

A Human Rights Watch report dated March 4, just as the fighting in Tikrit began, said it had “documented repeated abuses against civilians in areas that Iraqi security forces and militias have retaken from ISIS [Islamic State] since it took control of the northern city of Mosul, Iraq’s second largest city, last June.”

The report, calling on the government to work to prevent similar atrocities in Tikrit, said crimes carried out by the militias “include mass killings of prisoners and what appears to have been sectarian retaliation against Sunni civilians. Human Rights Watch also documented militias’ alleged war crimes against civilians in Diyala province after battles against ISIS in the area.”

GlobalPost’s own reporting has documented atrocities carried out by Shia militias.

The bigger battle ahead

So what does this mean for the battle against the Islamic State? While Tikrit surely counts as a significant military victory for the government, a much larger battle looms on the horizon.

With a population of more than one million people, Mosul is the largest city under Islamic State control. According to Hassan Hassan, analyst and author of ISIS: Inside the Army of Terror, the events in Tikrit will have a direct impact on the government’s ability to retake it.

“This kind of thing helps ISIS a lot,” he told GlobalPost. “People in Mosul will see the events in Tikrit and say: ‘this is what will happen to us — a lot of looting, lynching.’”

For many Iraqi Sunnis living under Islamic State control, the group represents the lesser of two evils.

“This is something the Americans don’t understand. Before ISIS controlled Mosul and these [other Sunni areas], people saw Iraqi security forces as corrupt, weak and smothering. Checkpoints were everywhere. They felt they couldn’t walk freely in their city.”

“When ISIS took over, it dismantled checkpoints and allowed local forces to have some control. Even its own fighters were not heavily visible.”

Continued atrocities by Shia forces against Sunnis not only reinforces people’s belief that the government has not shed its sectarian nature, but stop people rising up against the Islamic State, Hassan said.

“People see ISIS as a menace. They don’t like it’s brutality and so on. But they see the alternative as worse.”