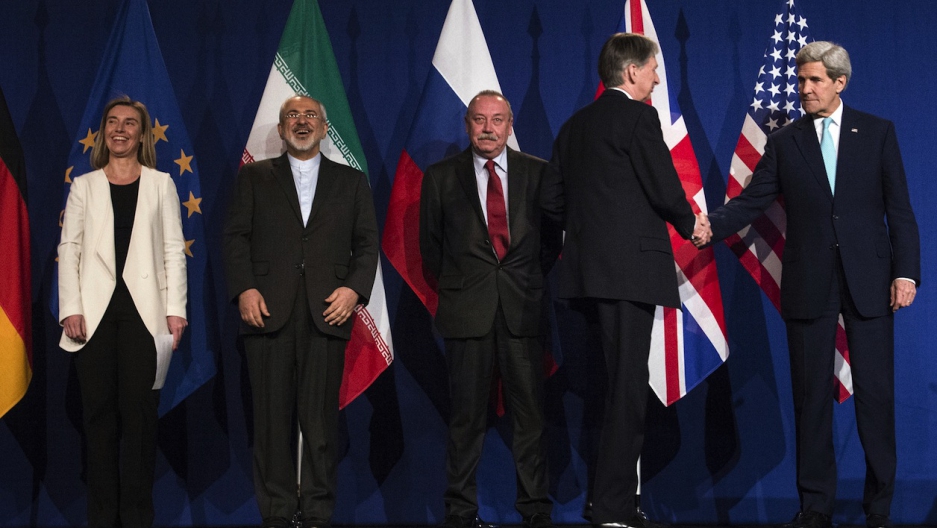 Terms of what the White house calls a "Joint Comprehensive Plan of Action" include tight restrictions on Iran's nuclear uranium mining and processing, and allow for intensive United Nations inspections. When Iran implements the agreed-upon provisions, the plan states, the UN Security Council will simultaneously lift all sanctions against Iran.

None of the plan's provisions take effect, however, until final negotiations are completed. The deadline is June 30.

"Assuming this deal is finalized, it is a major step forward," said Jacqueline Shire, a former member of the UN's Iran Panel of Experts, the group monitoring UN sanctions against Iran. "Iran's nuclear facilities will be subject to an unprecedented level of monitoring. There is no longer a plutonium route to a bomb, and uranium enrichment is limited."

The negotiators in Lausanne, Switzerland, had initially planned to formulate the political framework by March 24, but were unable to agree on key issues. Many of those disagreements are likely to carry over into the final talks.

The US demands that Iran be prohibited from developing nuclear weapons. Iran says it has only a peaceful nuclear power program and wants Western sanctions lifted immediately.

The source of the dispute stems from two very different conceptions of the nuclear issue. The US, Britain, France and Germany concede that Iran does not currently have a nuclear weapon nor an active program for developing one. They fear that an unconstrained Iran could quickly develop nukes in secret.

The Iranians argue they've never had a nuclear weapons program and will never develop one. They believe the nuclear threat is intentionally exaggerated, according to Mohammad Sahimi, a professor at the University of Southern California and Iran analyst.

Even if Iran could somehow build a small arsenal of nuclear weapons, he said, Iran wouldn't launch an offensive attack on Israel or other US allies. "They surely know that they cannot threaten Israel militarily, even if they had nuclear warheads, because Israel and the US can destroy Iran many times over."

Similarly, the West downplays the difficulty of developing operational nuclear weapons, Sahimi says. It involves far more than enriching uranium. Iran would have to miniaturize the bomb, install it on a missile, and develop a method to trigger the explosion.

"There is no evidence that Iran has mastered such technologies," Sahimi said. "Even if Iran makes a single nuclear bomb, it will have to test it, which means that the world will know about it. Iran will need at least 3-5 years to be in a position to have a nuclear warhead, assuming that everything would go according to the plans."

Shire sharply disagrees, saying Iran has failed to explain what may have been an earlier nuclear bomb program.

"Iran could be months away from a bomb or a decade away from a bomb depending on their actions," she said. "The objective of the diplomatic process is for Iran to assure the International Atomic Energy Agency of the peaceful nature of its nuclear program."

The US and Europeans have imposed crippling sanctions on Iran, which have driven up inflation, increased unemployment and made imported goods scarce. The US says the sanctions will be gradually lifted if Iran limits its production of nuclear material for making electric power and agrees to intrusive inspections, among other demands.

But lifting US sanctions to Iran's satisfaction won't be easy, says Professor Paul Sullivan, a Middle East expert at Georgetown University. Some US sanctions date back to the era of the 1979 hostage crisis. Some were imposed by presidential decree and others by Congress.

"It is a mess," Sullivan said. "To think the US sanctions can be shut off quickly is a bit of a daydream."

The Iranians are quite aware that Obama can't unilaterally lift all the US sanctions, notes Ali Shakeri, a former political prisoner. In 2007 Shakeri was held in solitary confinement for 140 days in Tehran's Evin prison. He’s now a board member of the Center for Citizen Peacebuilding at the University of California, Irvine.

"The Iranians want Obama to lift sanctions that he can control," Shakeri said.

The political framework agreement announced Thursday resolved the issue by calling for lifting of UN sanctions, which would also impact European sanctions, once Iran meets its commitments to limit nuclear production and other related matters. This may well be a source of conflict if both sides can't agree on whether Iran has fulfilled its commitments.

All political factions in Tehran want to see sanctions lifted, Shakeri said, but hardliners oppose virtually any agreement, fearing the US will renege on the deal. "But for the moment they aren't a big obstacle," he said. Ali Khamenei, Iran's highest-ranking religious and political leader, has so far backed the negotiations and marginalized the hardliners.

The same can't be said for the US side. Conservatives in the US Congress oppose any nuclear agreement that would likely emerge in June and are threatening to impose new sanctions on Iran. President Obama would veto such a bill, but he's feeling the right-wing pressure.

The talks slated to end in June are fraught and complex, says former UN panel member Shire. The preliminary agreement with Iran "is a necessary first step" to resolving the nuclear issue, she says. If the US is later blamed for a negotiations breakdown, support for tough, multilateral sanctions could eventually erode, she adds.

"I see no appetite for increasing sanctions internationally," she said. "I see lots of appetite domestically."

GlobalPost correspondent Reese Erlich has reported from Iran for 14 years. His most recent book is "Inside Syria: The Backstory of Their Civil War and What the World Can Expect."