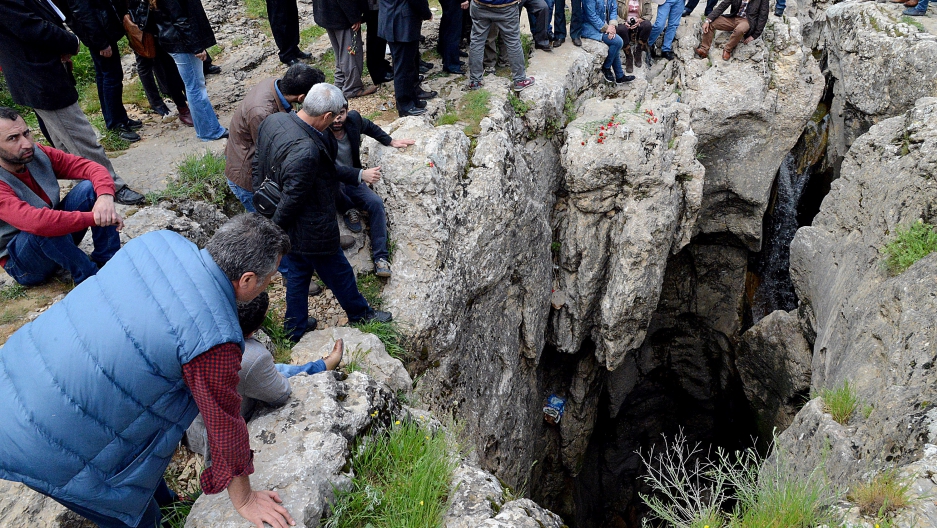 Armenian people gather around a chasm in the mountain during a commemoration ceremony at a site called 'Dudan' near Diyarbakir, and believed to be a mass grave of the Armenian Genocide, on April 22, 2015.
Credit: Ilyas Akengin
Share

DIYARBAKIR, Turkey — It’s been a hundred years since so many Armenians were killed in this part of southeastern Turkey. But Sona Mnatsakanyan is still nervous about visiting.

“I am a bit scared. We know what happened here and that up until today it remains unresolved. That gives the narrow streets of this city something creepy,” she says, standing in the courtyard of an old renovated inn in the historical heart of Diyarbakir.

So apprehensive was Sona, a lecturer from the Armenian capital Yerevan who now lives in Istanbul, that she and her friend told her taxi driver on the way from the airport that they were from Georgia.

She came here, like many other Armenians, to commemorate the centenary of what some say was the first genocide of the 20th century — the mass killing and deportation of some 1.5 million Armenians by the Ottoman Empire. It began in 1915 and continued throughout World War I.

The events still haunt Armenians today. And for many of them the pain is made worse by modern-day Turkey’s refusal to recognize the killings as a genocide.

But here in the Kurdish-dominated southeast, things are different. Many Armenians were killed at the hands of Kurds, but unlike the rest of Turkey, the Kurds — who have since faced severe repression themselves — are beginning to atone.

Exactly how many Armenians were living in southeastern cities like Diyarbakir, Van, Bitlis and Mus before the genocide is hard to tell, but they were no minority. The Armenians were just one of many groups who lived on these plains and in these mountains. They lived alongside the Assyrians, the Arabs, and the Kurds.

But these days Diyarbakir, the largest city in the southeast, has no Armenian community left. Those who survived the genocide migrated to Istanbul or abroad, and the families who remained mostly left the city in the 1950s and 60s. There are only the so-called “hidden Armenians”: the descendants of those who converted to Islam to save their lives, or of Armenian children who were saved from the massacres by Ottoman soldiers and Kurds and were brought up as Muslims.

The Armenian genocide officially began in April 1915, but massacres against Armenians were already taking place by the late 19th century. As World War I gathered pace, the Ottoman Empire tightened its grip on the regions under its control. Some Armenian groups sided with Russia, an enemy of the Ottomans. So all Armenians were targeted.

They were either massacred or marched toward the southern districts of the empire, like Aleppo in modern-day Syria. Many of them died of exhaustion and murders along the way.

These kinds of stories are part of everybody’s family history here. Nurcan Baysal, a researcher and writer in Diyarbakir, remembers the stories her grandmother told her.

“There was this young handsome Armenian man that many girls fancied. He was, along with other Armenian men, taken to a hill outside the village. The girls, including my grandmother, went to see what would happen to them. The men were murdered with shovels and axes.”

Baysal has no problem calling the events of 1915 genocide. “If you don’t call things by their name, the risk of it happening again increases,” she says.

The Turkish government, however, denies the conflict rose to the level of genocide. Turkish officials argue the number of people killed was far fewer than the 1.5 million commonly cited by scholars. And they say many of those killed were victims — like everyone else at the time — of the war and unrest that engulfed the whole region.

Now as more leaders recognize the genocide, Turkey is coming under increasing pressure to do the same.

Last Sunday the Pope marked the 100th anniversary by using the word genocide in a speech on the subject. Turkey immediately recalled its ambassador to the Vatican and Turkish President Recep Tayyip Erdogan issued a strong rebuke: “I want to warn the Pope to not repeat this mistake and condemn him."

THE KURDS SEE IT DIFFERENTLY

Baysal, who as part of her research talked to many Kurds in the region about the events a century ago, says their outlook on the killings have changed partly because of their own experience in Turkey.

“Soon after the Armenian genocide, the Kurds too became victims of state policies. There have been many massacres against Kurds, starting right after the founding of the Republic of Turkey in 1923. Although we Kurds are still here, we and the Armenians share a fate,” she says.

A woman cries as Armenian people gather around a chasm in the mountain during a commemoration ceremony at a site called 'Dudan' near Diyarbakir, and believed to be a mass grave of the Armenian Genocide, on April 22, 2015.

In the early 1980s, some Kurds organized themselves in an armed rebellion against the Turkish state, fighting under the banner of the Kurdistan Workers Party (PKK). The group has fought for three decades for greater autonomy for the Kurdish ethnic group in Turkey and an end to repressive government policies.

An all out war between the PKK and the Turkish state followed. In the 1990s, thousands of civilians were killed in the fighting. Government forces burned Kurdish villages. There were hundreds of disappearances and extrajudicial killings.

“In those years, elderly Kurds began to share their memories of the Armenian genocide with their children and grandchildren. There were Kurds who protected their Armenian neighbors. But many people assisted the perpetrators by rounding people up or by killing them,” Baysal said.

“Many Kurds felt ashamed of that. I feel ashamed of it. I travel a lot, and when I meet Armenians, I always apologize for what the Kurds have done.”

Not all Kurds agree on the need to apologize to Armenians. Many Kurds argue that their ancestors who carried out the killings were merely bought by the state.

But Abdullah Demirbas, a Kurdish politician, says the Kurd’s own fight for freedom and national identity since the 1980s has helped them come to terms with their role in the Armenian genocide.

“I believe that if a person is conscious of his national identity, he feels no need to suppress another nation. The people who participated in the genocide … were not sufficiently aware of their Kurdish identity,” he said.

Now that the Kurds have become more aware, Demirbas said they have an obligation to grant others the right as well to live their identities fully. This includes Armenians and other groups like Assyrians, Arabs, and religious minorities like Alevis and Yezidis.

“Part of this vision is apologizing for our part in the genocide. The Kurds may have been used by the state […] but they should have resisted. Our silence makes us guilty.”

Demirbas has backed up his words with action. During his time as mayor of Diyarbakir’s old town, the municipality began disseminating information in Kurdish and Armenian, where before there was only Turkish. The Surp Giragos Armenian church was also restored and is to be the center point of this year’s commemorations.

People attend a concert by Armenian pianist Raffi Bedrosya at Surp Grigaros church in Diyarbakir on April 23, 2015, during a commemoration marking the 100th anniversary of the massacre of 1,5 million Armenians by Ottoman forces.

Some Armenians campaign for the right to return to the lands where they once lived. Demirbas says they should be welcomed.

“If we call these lands ‘Kurdistan’ as a land where only Kurds live, or ‘Armenia’ as a land where only Armenians live, what difference would there be between us and the Turkish state? We have to create a ground for living together on these lands, which belong to all of us. We should no longer rely on the nation-state concept, which created these massacres in the first place.”

As such, Diyarbakir continues to open its arms to Armenians.

American-Armenian musicians Onnik Dinkjian and his son Ara held a concert in the city’s theater recently. The Dinkjian family escaped from Diyarbakir during the genocide. It was an emotional performance. Kurds and Armenians filled every seat in the theater. People stood in the aisles and on the stairs. Many danced.

Sona and her friend Anna Davtyan, a poet who is also originally from Yerevan, were at the concert too.

“Diyarbakir is not an Armenian city anymore. But I have come to love it, wandering through the streets, looking at the black walls, the wooden doors,” she said after the concert.

“After spending a few days here, I no longer feel the need to say I am from Georgia. But who exactly are the Kurds apologizing to? There are no Armenians left here. Maybe the apologies are more important for the Kurds themselves than they are to us. They need to do it this way, so they can continue on their path.”